After my little near-motorist experience the other week, I became interested again in “Bike Rage” and ways that I might improve my chances of seeing not only this Christmas, but a few more after that as well …

Now if you’ve already watched Catalyst’s excellent segment on “Bike Rage“, then you’ll already know the underlying reasons behind this phenomena, but just in case five minutes fifteen seconds is too much of your life to invest in watching this video, I’ve cut and paste the key bits below.

I’ve even gone and highlighted the really, really important bits in green for super busy people …

Simon Pampena
So why do cyclists get so much abuse? Well, some theories have been put forward by… psychologists? Well, then we’re going to need…
Barista
A latte.
Dr Cameron Munro
So it’s all about out-group homogeneity bias.
Simon Pampena
You sure you don’t want a latte?
Dr Cameron Munro
Quite sure. It’s about making generalisations about a group of people with whom we don’t empathise. So some people would say that all Gen-Yers are slack. But, of course, it’s not true. So, similarly with bike riders, there’s an assumption out there that some bike riders all behave in a certain way, and that is generalised whenever we see a bike rider on the road. In a different way, we look at motorists as being part of us, one of us, the in-group. And so when we see a motorist breaking through a red light, or travelling at a high speed, we see that as a trait that’s attributable to the individual, rather than to the whole group.
NARRATION
But while our brains seem biased, our eyes aren’t helping either. Studies suggest car drivers have difficulties seeing bicycles, particularly if they aren’t expecting them. And when we don’t see the bike until the last minute, we see rage.

Source: http://www.abc.net.au/catalyst/stories/3857163.htm
So, the problem is two fold (1) motorist don’t empathise with us (we’re on the outer) and (2) they don’t see us until the last minute and don’t like surprises (come to think of it, I don’t either when it comes to motorists appearing in my cycling space, so I guess that’s fair).
“Well it doesn’t take a genius to figure out the solution to that” I thought to myself, as I considered texting Kim to double check if she was still unconvinced that I was a genius (because if she did I could claim that maybe it does take a genius to figure that out, and that would be really cool).
But I figured I already knew the answer to that question as well, and she’d only say something like “would a genius forget to organise something for our anniversary?” and I wouldn’t enjoy the conversation very much after that.
Maybe I should just have pointed out that everything not highlighted in green is irrelevant and you could have skipped over all the above if you’re a busy person.
Anyway, a bit of online shopping later, a few days for delivery, and for the last week and a half I’ve been trialing my own solution to the bike rage divide on my commutes to and from work …
Ladies and Gentleman, I present to you, Rambler’s High Vis cycling suit … 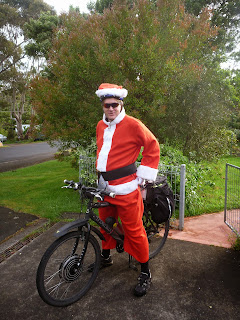 Yep this little beauty ticks all the boxes … there couldn’t be any motorists out there who don’t empathize with me now.  I’m no longer some middle aged man in lycra, I’m Jolly old Nick.

Not only that, but everyone see’s me from a mile away, and maybe I’m reading something into nothing … but it’s like nobody wants to upset this particular cyclist at this time of year.

Seriously I’ve never come across such a huge change in driver behavior:  I’m given space on the road, and some motorists (wait for this) actually smile and wave when they drive past.
I know.  That’s Genius … or was I the only one going there?
So there you go, all you need to do to solve these big problems is a good bit of research, and a willingness to make a complete arse of yourself … two things I’m more than happy to do. 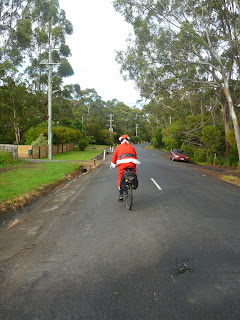