I was almost killed on my bike again tonight.

Unfortunately this isn’t as unusual as you may think, in fact it was the second time in almost a fortnight that it has happened to me.

Tonight, it was a Taxi Combined driver that couldn’t wait five extra seconds in the turning lane behind me on Sandy Bay road and instead cut around in front of me pushing me into the oncoming traffic as it raced across to get into a service station through oncoming traffic.

It might not sound that bad, but if you were there in my shoes you’d be feeling the anger I am now.

When I calmed down, I went over and made the effort to politely approach the driver and let him know that his driving almost killed me.  His response was, and I quote, “f*#k off“.

A couple of weeks ago, I was going around the round-a-bout at the bottom of Gladstone Street in Salamanca Place when a vehicle with Rhubarb Catering painted on the side drove into the round-a-bout (that I was already half way around) and almost took me out.

Now, I’m sure if you asked the young lady who was driving that vehicle about this she’d deny it emphatically, but then she was so busy reading something on her iPhone that I doubt she even noticed I was there.

I saw another cyclist lying on the side of Sandy Bay Road not long before my own Rhubarb Catering incident.  He wasn’t as lucky as me, in fact when I saw him he was lying on the footpath as an ambulance drew up beside him. 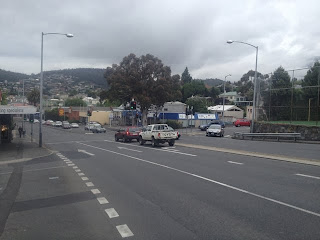 It looked like he’d been taken out by a car probably not noticing him as they cut into the slip lane heading up from Sandy Bay Road onto Antill street.  That won’t surprise any cyclist who has been through that intersection.  I almost got taken out by a car myself there the day before on my lunchtime ride.

A couple of months ago I saw another cyclist, this time at the top of Gladstone Street on Sandy Bay Road, being hauled away in an ambulance after it looked like he’d been hit by a car swerving over to the left lane at yet another dangerous intersection for cyclists.

As for myself, I’ve had beer bottles thrown at me on that section of road, I’ve literally been run off the road and onto the side walk by cars passing way too close and I’ve even had the joy of full on road rage just for having the audacity for being on that road.

I’ve tried to do something about this.

A few years ago I was attacked by a motorist on the highway into Burnie.  When I say attacked, the passenger had half climbed out of the window and as they went past at 60 or 80kms/hr the car swerved over into the verge where I was riding and the passenger tried to hit me from behind.  Probably the only reason I’m here today is because he misjudged the speed or distance and only got a glancing blow off my helmet.

I got the cars number plate, I called it into the police, and I made the effort the next day to go to a police station and signed a statutory declaration about the incident.

I was sure that an accident that serious would be acted on.

Because of that, the next time I was run off the road and managed to get the drivers number plate I reported it to the Bicycle Tasmania Incident hotline.

I thought that reporting the incident to a bicycle advocacy organisation (of which I was a member) would give them something they could use to stand up for cyclists.

All I got back from them was an email saying that they have removed the number plate I’d provided from their website for privacy reasons and that I should contact the police about it.

And while the Government might use our taxpayer money to run adverts on TV saying that “if you break the law, you will get caught”, the reality from where I’m looking at the world is that you can break the law when it comes to cyclists, and nothing will happen.

So as I was mulling over whether to write something about these incidents, I happened to come across a link to the video below on YouTube  It’s four and a half minutes long, and it’s not the most exciting video in the world, but it does say what I’d like the world to hear …

So today, I’m still angry and I want my Government to know that when they make decisions to cut funding that means that I can get threatened and maybe one day killed on our roads, and I can’t do anything about it. (I did, for the record, call the police and was basically told that I could go down to the local police station and fill in a report so that if another incident happens in the future they will have it on record, but that’s not what I want.   I want someone to look that guy in the eye and tell him he can’t do what he did and expect to keep the privilege of driving on our roads, especially as a taxi driver, and especially not with that attitude.  I also left a complaint with the taxi company, and to their credit they did call me and say they were looking into it.)

I need my Local Council to know that building the Battery Point Walk and Cycleway aren’t just theoretical nice to have’s, key infrastructure like that could save prevent injuries and maybe even save lives.

But most of all I want motorists to know that I’m a human being, just like them.  I’m just one that chooses to ride a bike as well, and I don’t think I deserve to die so you can get to wherever you’re going 15 seconds faster.

Finally, this isn’t a hate email to motorists, and I want to say that I find most of you super cool and friendly.

I also drive a car, so I know that sometimes it’s a hassle to get slowed down by a cyclist, I know we all have bad days when we don’t pay attention as much as we should, and I know that sometimes cars try and pass me and they just plain misjudge the distance or speed and that this causes near misses, but I also know that most motorists in that situation are probably sitting behind the wheel berating themselves for scaring me on my bike.

Finally, I know that there are some roads where cyclists and motorists don’t mix well, and Sandy Bay Road into the CBD is one of those areas, but it’s also my only realistic route to work.

So to those few of you who aren’t, please be nice, please.

My life kind of depends on it.