Could you imagine a post where I didn’t find a way to make myself the hero?

Nor could I … until today.

So it started back when that little twig went through my spokes and took out 13 spokes (yes, turns out I’d destroyed more than I first thought). 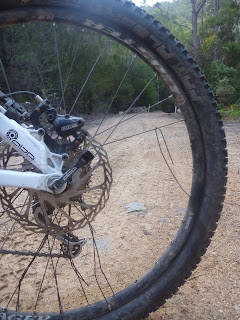 Kim and I high-tailed it back to Hobart the next day to see if I could get it fixed only to find that Avantiplus were closed, and the next two bike shops I took it to … McBains and Ken Self Cycles only gave it the most cursory look before proclaiming that the wheel was dead, and no they didn’t have those sort of wheels in stock, accompanied with a look that said what was I doing riding such an old bike anyway … I mean a 26 inch wheel? Surely I knew they were so last decade?
A bit disheartened I returned home, and started looking online for options for both new wheels and new bikes.

The next day, a little better informed, I decided to do a run through Treadlies, Cyclingo, Bike Ride and Ride Bellerive to see if they had any wheels (or bikes I might like) in stock.

I was both surprised and delighted when I walked into Treadlies, showed the guy there (Ollie?) my wheel fully expecting the same response as yesterday, only to be told that he’d have it fixed and back to me in a few hours … 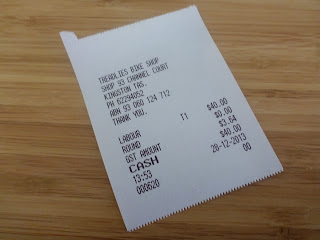 Given he had to replace 13 spokes and true the wheel, I thought $40 was pretty darn good value.

Whilst at Treadlies, I also saw one of these …

A Giant Trance X1 29er … I so wanted one of these when they first came out a few years ago, but I wasn’t convinced about the 29er phenomenon then, and to be honest I still couldn’t decide whether there really were benefits in these bigger wheeled beasts and they didn’t have a demo bike in stock with 29 inch wheels to try.

Anyway, with three hours to kill I headed off to Cyclingo but couldn’t do more than ogle a fatbike through the window because they were also closed.

Next was a quick stop at Bike Ride to check out their Rocky Mountain range, but the price tag had me quickly retreating back out the door soon after I arrived.

This landed me across at Ride Bellerive where I first had to convince the sales guy there that I wasn’t really interested in the $700 bike he was suggesting was perfect for me and that I wanted something a little better … dare I say pricier.  He then tried to sell me a $1300 bike and I had to gently try and break his image of me as some post-Xmas specials shopper looking for a bike to take me along the clarecce foreshore trail.  I did this in my usual subtle way by suggesting I was thinking of something more in the $2,000 to $4,000 price range.

With this little bit of a nudge, we got to looking at some proper bikes and 20 minutes later I walked out of the shop with this … 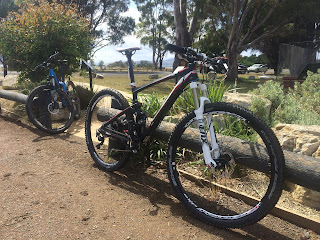 Unfortunately it was only a demo bike, but given I’ve never ridden either a 29er or a carbon bike it was still nice to pretend it was mine.

I had it to play with for the rest of the weekend so I took it for a short spin down between Margate and Snug where I tore apart the times I’d ridden a couple of weeks ago down there on my Trek.

Yea, suddenly I understood why people like these bikes with the big wheels.

Then I took it for a ride up the switchbacks to the new cliff top track above Clarence MTB Park… and, well … I didn’t love it so much.

Although some sections were definitely easier and quicker, I really struggled with the wider turning circle around the switchbacks and what really surprised me was when I hit a few steep sections and stood up out of the saddle … I just lost traction instantly.  There’s got to be some trick to that.

The remote suspension lock out.  I thought this would be a bit of a gimmick, but man it makes a difference in speed when you’re jumping on and off tracks and roads like I was down at Margate.

In short, I loved this bike, and although I was only thinking of buying it’s baby brother at $4,200, it was looking attractive.

And then comes the evil bit.

You see, I jumped onto bikeexchange.com.au to have a look at prices for the different bikes I was considering, and the first ad that popped up was for a shop in Brisbane which was having a sale on Giant 29ers … specifically they were selling the Trance X1 29er for $2,099 … a full $700 off RRP and half the price of the Merida I was looking at.

… for all of about three seconds, which was the time it took me to remember that Stephan was cruising around up that way somewhere with his van picking up a new outrigger … a quick phone call, and yes he was currently in Brisbane, and yep, he would be happy to pick up a bike for me, and so a second phone call to the shop, and yep, they did have one in stock which they would hold for me until the 2nd of January …

So that all just seemed to work out way too well and I’m just crossing my fingers that when Steph turns up there on the 2nd to pick it up that it is still there waiting for him.  Unfortunately I’ll then have to wait a couple of weeks for Stephan to drive back down to Hobart with it, but the indication I got from the bike shops in Hobart was that it would take that long for delivery anyway.

So, I’m feeling a bit guilty and evil for abandoning my local bike shops to save a few hundred dollars, but at the same time I just had a look over my accounts and discovered (rather disturbingly) that I spent $1,030 at McBains and $375 at Avantiplus in the last calendar year (2013) solely on consumables and servicing my Trek MTB.

And I guess that’s the balance in my world … I spend my money both locally and on the internet and I’m sure I’ll pay my penance in servicing and upgrades over the course of the next year for this latest purchase, but until I find a bike shop in Hobart that doesn’t treat me like a cash register I think when I see an offer like that online I’m going to have to take it.

Still, makes me feel evil though.