It was touted as the hardest mountain bike race (for its distance) in Australia.

The organisers even sent out a newsletter a couple of weeks before the race actually suggesting that people consider downgrading to the shorter course.

1,500 metres of climb in just 43kms or over 2000 metres of climbing in 70 kms.  There was no doubt in my mind that the Cranky Penguin was going to be epic …. but I’m not enticed by epic … I’m only interested in things that are awesome.

Therefore, I consulted my book of awesomeness, and after realising that I couldn’t follow the normal route to awesomeness in a mountain bike race (ie. train hard and win my category) there was only one real pathway left to me to make this a guaranteed awesome day …

I’d ride the hardest mountain bike race in Australia … in a penguin suit. 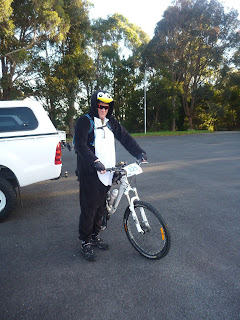 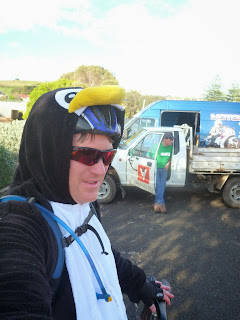 Just in case you’re wondering, the book of awesomeness does warn readers that there is an awful lot of overlap between the definitions of “awesome” and “completely idiotic”  – the main difference being that awesome things work, idiotic things don’t.

For example, here’s another example of something that could potentially fall into both of those categories … 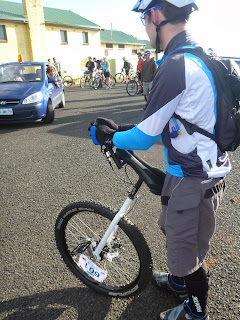 This was Darren (sorry if I’ve got the name wrong) and he was doing the entire race on his unicycle.  That is also rather awesome, probably (if I admit it to myself) more awesome than doing it in a Penguin Suit.

So the race … where do you begin … it was sublime, technical, acclivitous, beautiful, vertiginous, and did I mention steep?

It was also like being in a f__ing sauna in that penguin suit.

By the time I’d got up the road climb from the town to the Penguin MTB Park I was well and truly at the stragglers end of the field and I felt like I was a frog (penguin?) in the proverbial pot of slowly boiling water.

Then the real climbing began up Mount Montgomery and I was starting to realise that there was a good reason that there was only one (still potentially awesome) idiot in the field of 200 riders wearing a penguin suit.

You see, mountain biking in a Penguin suit has lots of things going against it: Like the heat, the chaffing, the inability to see behind you and the extra challenges it presents when you need to repeatedly mount and dismount at short notice on technical sections (it did occur to me in the first few kilometres that maybe I should have tried to ride a bike in my suit before the race). 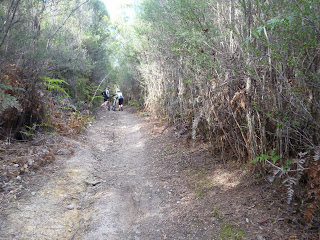 The challenge of dismounting became particularly evident as I headed down the fun, but very technical, section down Keddies Creek, and let me tell you getting your onesy caught on the seat as you’re trying to dismount on a 45 degree slope before crashing into a creek is not a moment you want in your life.

Therefore, with much regret, I rolled into checkpoint one and (as Penguins are known to do) I moulted my outer layer (in what I was told was a puff of steam) and continued on around the next section in my summer feathers.

It was so awesome getting out of that suit.  Even though I was now heading back uphill my speed still increased and I loved the section up the Gnomen / Duncan climb to check point two, despite getting lapped (already) by the lead rider of the 70km marathon just before I got there.

It was also at this point that the sweat session in my penguin suit came back to haunt me as I suddenly felt like I usually get at the 70km point of a race – cooked and fried.

I really struggled up the technical single track heading up the South Duncan trail, though to be honest there was some seriously steep inclines and declines in this section that I would have struggled through even if I was still fresh. 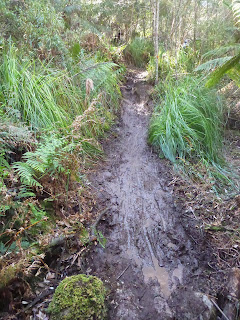 Finally, I hit the ‘steep hill’ which we were warned to bring our climbing gear to get up and because I was expecting the worst, well, I found it pretty easy as it was really only a short (50 metres?) climb. 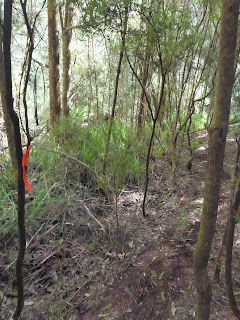 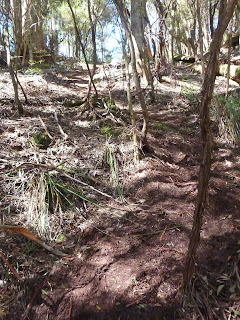 and then (as promised) I came out on a very sweet and fast dowhill run (just wish there had been a bridge at the bottom of that creek) before coming back onto the washed out track and enjoying a superb (flat to uphill) ride back to checkpoint 2. 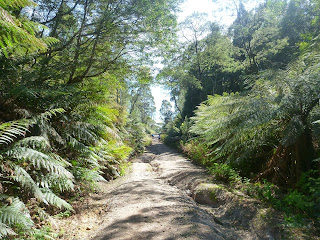 Now my recollection of the route profile from this point was that it was a downhill run all the way to the Leven river, then a nice flat ride along the river back to check point one and on that basis I figured I was cruising it.

Unfortunately my recollection missed out a rather large climb and descent between the “downhill run” and the “nice flat river riding” bit and consequently I found myself plugging back up a completely unexpected climb cursing penguin suits, empty water bottles and bicycles which don’t have engines in them.

I do confess that I flirted with the idea of taking responsibility for my predicament at this point, however I decided that that would be tantamount to admitting that wearing that Penguin suit was a mistake, and that as making a mistake would not become someone who aspired to awesomeness, I decided to continue to blame the world for the pain I was going through.

Finally (and I mean finally) I got to what I now know is the top of Purtons Road and went flying down the very steep descent which I had thought was the descent I had done after checkpoint 2.  I guess that would have been one advantage of doing the full distance … I’d at least have known what was ahead of me on this section when I came around for the second lap.

Then I got to enjoy the ride back along the river (and I ask you am I the only one that wanted to just stop racing and go for a quick swim in that river?). 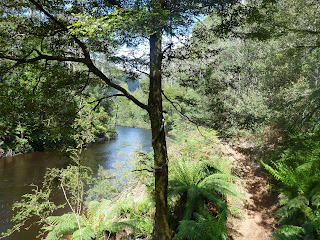 This section was gorgeous, and the riding was (as promised) very north-shore.  There were quite a few compulsory dismount points, and a few other short sections where I chose to dismount, but this was still my favourite section of the whole route. 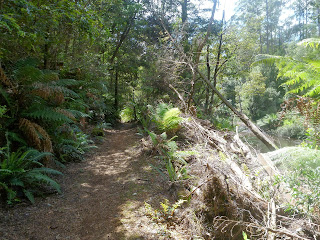 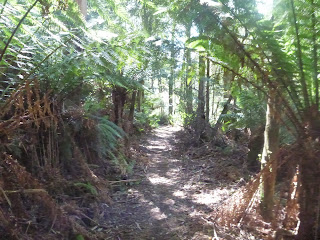 But of course this section had to end, and because this is the Cranky Penguin, it ends with not one climb, but two short sharp climbs back to Checkpoint 1 (now masquerading as checkpoint 3).

A banana, some cold water poured over my head and a couple of lollies later and I was feeling human again, which could mean there was no denying the inevitable …

It was time to get back into the Penguin suit for the ride back to the finish line.

I regretted that decision.

I regretted it a lot.

I regretted it every stinking pedal stroke back to the finish line.

I regretted it when I was climbing the road back towards the MTB Park and the poor marshall there had to stop clapping because I took so long to get to him and his hands were getting sore (or was that just in my head?).

I almost died when the lady at the start of the singletrack said “not far to go now, just two kilometres … or are you just on your first lap?“.  first lap?????? wtf???  (there was no second lap, but at the time I was sure that they were going to send me around the park twice and I already decided that I would DNF rather than do two laps).

And I think that like a lot of other cyclists, that last section of track through the mountain bike park just seemed torturous as it twisted and turned on itself with the end never seeming to get any closer (small suggestion for next year: would be great to have 5km, 2km, 1km, 500 metres to go signs).

But then I emerged out onto the Speedway and it was only then that I realised that I wasn’t about to be sent around on a second lap, but that I was actually heading for the finish line …

Crossing that finish line was awesome.

Getting out of that penguin suit was awesomeness squared.

Did I love this race: Yes.

Did I suffer: Yes (according to my Strava data, I managed a 221 (Extreme) on the suffer scale)

Do I hope it will be on again next year: Yes, yes, yes.

Do I think it will become one of those iconic races on the racing calendar around Australia: Yes.

Just in case you’re wondering, my Penguin Suit has left me for a better life.

As I was disrobing after crossing the finish line, I made a comment along the lines that I may never want to see my wonderful penguin suit ever again (you can guess what I really said) at which point a gentleman who was selling cold drinks in a nearby tent said he’d have it.

Thinking he was joking, I took a double-take and registered that he was standing under a banner which read “1st Penguin Scouts Group”.

He figured that (after a wash) their scout group could use it, and so seeing a happy home for my onesy, I handed it over for what I hope will be a better life ahead.