Most of my toys have a pretty short life, and usually even when their life ends under warranty I just accept their deaths as being down to me and so don’t do anything about it.

At least that’s what I tell myself out loud … in reality I know the deep down truth is that I hate dealing with call centres so much that usually I’d rather just buy another whatever I’ve just destroyed than have to go through the living hell that is trying to get something out of a large organisations call centre.

But, as you may recall, towards the end of my little European soujourn, disaster struck when I went to turn my kindle on one day … and nothing happened. 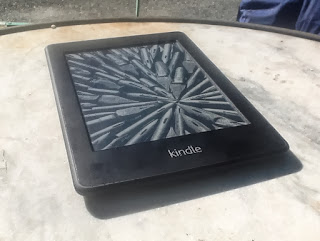 Given I had only read half a dozen books on it I felt a bit ripped off, and went against my deepest principles and called Amazon …

What can I say … it all started as I expected when a guy that I could barely understand started telling me to try everything that I had already tried having read their “What to do if your kindle won’t start” FAQ on their website.

Ten minutes later, after I’d satisfied him that my kindle wasn’t working, he then put me through to a ‘specialist’ who got me to repeat exactly what I had just spent ten minutes doing with the guy that wasn’t a specialist, and I was this close to hanging up when much to my surprise my specialist friend declared . .. “Hmm, it does look like it’s not working … I’m just authorising a new one to be sent out to you right now … yes, that’s done.”

Say what? rewind please … you’re sending me a new one?

Yes, he assured me it was already in the system.  All I had to do was take the broken one back to the nearest UPS within 30 days and I wouldn’t be charged for the new kindle  …

“Ah”,  I thought to myself, “there’s the sting in the tail”, I knew this was too good to be true as I pointed out to my specialist friend that I was in Australia and we didn’t have UPS here.

He assured me that we did.

I assured him that I’d just googled “UPS in Australia” and that we didn’t (at least not in Tasmania).

He asked for a minute to look into it … and then came back onto the phone and …he apologised.

Yep, he agreed that there was no UPS within 200 kilometres of my location and therefore he agreed it was unreasonable for me to return it. 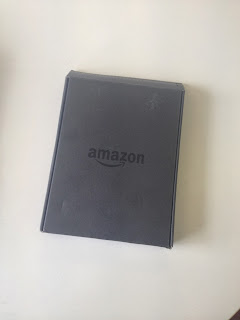 I have a replacement kindle … and I’m impressed.

I have to be honest and say that was twenty minutes well spent.

But for now you have to excuse me, I still have enough time in the rest of my lunchbreak to get onto Amazon and buys some more books …