So day one on the Bodensee Konigssee Radweg didn’t turn out to be too exciting, but it was very wet. 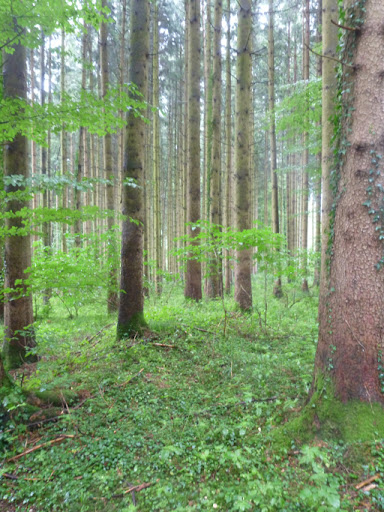 It was pretty easy riding with only one small series of hills just after joining the route from Salzburg.

So almost before I knew it I was standing outside my hotel in Bergen, ready for a hot shower, some real food and dry clothes, but instead I found myself wishing I could read German as I stared at what looked like a very closed hotel with a scribbled note stuck to the door.

The only bit of the note I could read was the “17:00” which I assumed would be the time when someone might arrive to let me in … Three wet, cold hours from now.

Somewhat at a loss as to what to do next (as the thought of a warm shower faded away) I had the brilliant idea of photographing the message on the door and heading back to the tourist information centre I’d seen down the road to see if they could tell me what it said.

Genius if I do say so myself.

As it so happened as I was undertaking this act of genius, the secondary thought of actually trying the door also occurred to me, and wouldn’t you know it … it was unlocked.

So I walked into the foyer and there on the counter were all the room keys, and there was one with my name on it.

I didn’t care that (as usual) it was the furthest room on the highest floor.

That shower made it all worthwhile.