“How about circumnavigating the egg?” Cath asked late on Friday (via email).

“A paddle – one lap around Egg Island on the Huon River.” 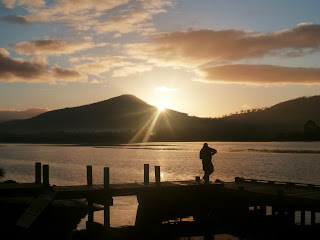 … and that’s how any good story should begin.

Unfortunately this story must be brief as my working days are currently very long and my list of urgent things to do keeps growing (I’ve snuck into work at 6.30am to get a few things done before everyone else turns up in case anyone thinks I’m doing this in working hours).

So, I managed to arrive on time for Cath’s ridiculously early start time for the paddle, which is my way of saying that she suggested a rather sensible time for us to be on the water at Franklin (8am), but my brain math’s worked something like this:

“Hmmm … 8am on the water … haven’t paddled since … forever … paddling gears currently a bit all over the place… better get there at about 7.30am so I’m not holding things up … how long does it take to get to Franklin?  45mins?  an hour?  … better make it an hour … so leave here 6.30am …. better make it 6.20am out the door … need to watch the tour de France before I go in case Cath accidentally tells me who won the stage  … Hmmm … need at least an hour for that … better get up at, let’s see … 5am … Eek …that’s ridiculously early.”

This is also why I arrived down at Franklin at just after 7am, a full hour early ….  but I did get to see the sunrise. 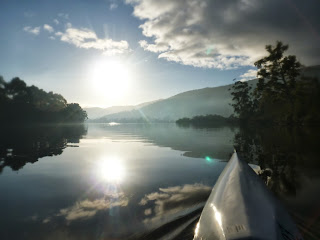 Cath of course turned up at precisely 7:54am, was ready to go at 7:59am, and was still waiting for me to get ready to be on the water at 8:04am, or at least that’s how I’m telling the story.

I’d forgotten that Stephan had borrowed my boat for a friend of his until I was out on the water and noticed that my knees were up around my ears, so poor Cath then had to adjust my foot-brace for me on the water, and just when we were finally getting going into a bit of a (slow) rhythm … I smashed straight into a submerged log and did this … 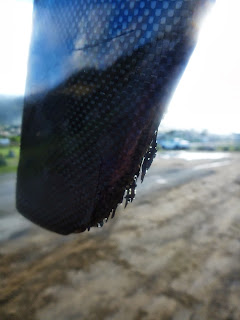 Another $200 worth of damage, and even more importantly (because I had to get out of my boat and stand in knee deep water to bend the rudder shaft back into place so it would turn) … I got cold feet. 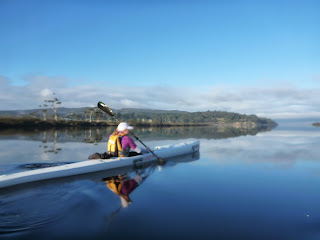 It was kind of a beautiful morning, but if you want all the blubbery “what a wonderful day” rubbish, go read Cath’s version of events over on her blog (you’ll have to scroll down to Sat 13 July as I don’t know how to link directly to a post on her fancy-smancy blog).

What I recall of the downriver paddle, and I believe she refers to it as us having a “conversation”, was 10kms of my getting the answers to every question she asked me, wrong.

For example, one conversation …

Cath: “So if you had to live anywhere in Tasmanian, except Hobart … where would you live?”

Silence, as I think on this important question,

“Oh, and you have to live there for five years.”

“No, that’s not an answer, it has to be in Tasmania, you’re not allowed to leave the State, even for six weeks, and it can’t be within 25kms of Hobart … where would you live?“.

More consideration, and then my well thought out response “Launceston”.  It would get me up to the other half of the State and within an hour or twos drive of a lot of trails and tracks I hadn’t really explored.

But, NO, as I immediately found out, this wasn’t an interested general inquiry as to where I might want to live, this was actually a test, and Launceston was most definitely the wrong answer.

In fact it was the very, very, very, very wrong answer (sorry, Launceston people … just remember … I voted for you) for many reasons … one of which,  the “no beach” reason, I did have to agree with.

St Helens was the correct answer, and I’m glad to see from Cath’s blog, that I heartily agreed with this, and thus got half a mark (hey, I’m competitive, so if I’m in a competition … I’m keeping score).

On another, and completely unrelated part of our conversation, I discovered that the correct answer to “Do you like to cook?” is apparently not “Yes, but only for myself, not for others.” 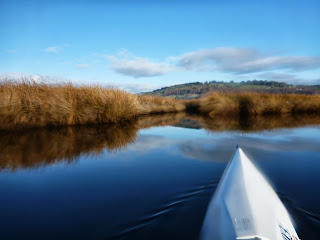 Fortunately, just as I was starting to think that a mornings paddle to clear my head and forget about all my current work life stress may not have been the best idea in the world, we got to the Southern end of the Island (which is where I grew up) and so I was able to send Cath off to sleep with numerous stories of my childhood, which although they sounded like wonderful and intricate stories of humour and interest to me, probably came across to Cath something like “My dad built that Jetty” … “My dad built that boat ramp“, which, even I have to admit as I type this, doesn’t capture the full depth of the story I felt I had told.

Then something magical happened … no a whale didn’t come up beside me, nor did Cath actually decide I finally answered one of her questions correctly … what did happen was that I took two photos and when I uploaded them for this blog … some new google god magic stitched them together into this …

That red shed over on the left … that’s where I grew up …did I mention that my Dad built the Jetty just near by?

The final five kilometres or so back to Franklin seemed to pass fairly quickly and pleasantly, although after not being in my boat for such a long time, and despite the relatively slow pace of the trip, I was feeling pretty sore in certain muscles.

This was unfortunate for me, as Cath had been keen for one last paddle through the canal before we went in.  I wasn’t so keen.

I should of course have figured out by this point that that didn’t really matter.

Cath had already anticipated my laziness and so had somehow managed to arrange for a guy to appear in a tinny, trawling for fish with his kids … then just as a fly steps into a spider web, I didn’t even notice as I became trapped on the outside of this trawling boat and all its fishing lines until it was too late and I found myself not beside my car … but instead at the mouth of the canal …

So we went for a paddle through the canal … and back.

All up we paddled 22.4kms in just under three hours, and my favourite statistic from the paddle … we gained an elevation of 151m … no wonder the paddle was so slow!

Then just like out arrival, 7 minutes after we came to shore, Cath was changed, her boat on the roof and she was heading home …  I hadn’t even got my left bootie off, and I think my kayak was floating off into the distance because I forgot to pull it on shore.

So that’s my story of how the day went, and that is the truth, the whole truth and nothing but the truth.