So, re-capping where I got to in my last post, I was just starting my second 5km lap, I was 30 minutes into the race and I was about to be lapped.

That hurt, and to show just how fragile my mental fortitude was, as the two front runners came up behind me, one of them call out “track” … and it just came across really rudely.  To be honest I got pretty p*ssed at them.

Now sitting hear at my keyboard typing this, it’s awfully embarrassing to think just how strongly this anger got into my head and festered, especially as the reality was that those guys did exactly the right thing … they called track loudly and with plenty of notice, and let’s face it these guys were racing, not thinking about my feelings.

I stewed on this for a good few minutes, until about the time that I realised that no one else had come past me, and that I wasn’t in fact going to get lapped by every single rider on every single lap and have abuse shouted at me (I was in that kind of state of mind).

I therefore decided that I could maybe enjoy this race after all and got back into the business of not trying to kill myself whilst going as fast as I could. 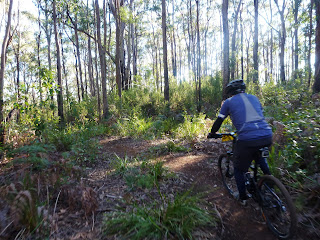 In dribs and drabs riders went past me, and most were super polite and encouraging which I think is one of the great things about mountain biking races like these … the good riders and the bad riders (me) get to mix it up together.

I don’t however want you to think that it was all smelling roses.  I had no one to chase in this race, no one even to pace off, so it was just me going around feeling really slow and fighting a bit of a mental battle.

To be honest I spent most of the next 15 minutes trying to figure out if I could slow down enough to get away with doing three laps instead of four , and although I knew there was no way the maths would ever actually work out, I did still somehow convince myself that I would only have to do three laps, and this somehow made the hurt I was going through a whole lot more manageable as I was therefore over half way through the race.

Then I got to the end of the second lap … 1hr:04mins … I’d slowed, but only slightly, and yet still, despite the overwhelming evidence to the contrary, I managed to convince myself that I only had one more lap to do.

It really does show how easily you can fool someone who wants to be fooled. 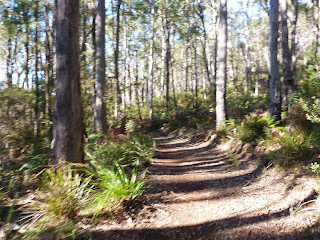 As I got to the hill heading up along Williams Reservoir my chain jammed in my front derailer, but not thinking much about it, I got off, fixed it, and continued on.  Then, after the fun little run downhill on the other side of the reservoir, my chain jammed up two more times and I mean it got really jammed.

I was therefore trying to take it really easy up a quite long pull of a hill and was really focusing on my bike and gear changes, not what was happening around me, when one of the front runners came flying past me (again) on the right hand side so close that he almost knocked me off my bike.

Now I hadn’t really mentally calmed down from the first time I’d been lapped by this guy, so having just lost my chain three times in the last kilometre only to then have a guy overtake me on the right pushing me off my line with no warning when I’m already in the right hand track of a section of double track and there was a whole left lane available to him to pass me on … well, I didn’t like it and I went into a very dark place indeed.

I decided that this race, and in fact all northern riders, could go f*#k themselves if they were going to be this competitive in a small event like this.

I was going to get to the end of this lap and go home.

Strange thing was, there was a small part of me that knew that I was just using this as an excuse to pike out of the race at the end of this lap, but every time that little rational part tried to raise it’s voice, the other voices in my head shouted it down in a malevolent maelstrom of angry screaming such that even my internal rational voice was scared to speak up against me …

I finally got to the top of the climbing sections (with steam still coming out of my ears), and launched down the latter half of the course when some magic happened.  A series of riders, probably just 2 or 3, passed me, and each one in turn called out how they’d pass me in a really friendly way and each passed on a little bit of encouragement as they went past.

Nice.  This is MTBing as I know it.

Then as I got to the bottom of the first downhill section, where the track opens up a bit and heads slightly uphill, I saw flannelette shirt guy (who I now know was Josh King) and his daughter(?) riding along enjoying the course.

Just watching them, I felt the dark cloud circling around my head just disappear as I realised that here were two other riders just out to enjoy the trails.  We had a brief chat as I went past, and to be honest I can’t even recall much of what we said, but I do recall the impact of that encounter on my attitude.

I felt good, and most importantly I remember thinking “if those guys are out here, then I can be out here too“.

That’s when I embraced the fact that I was here to finish this little enduro.

I was going for four laps.

Having resolved this conundrum in my head, and embraced the fact that I was here to do the course, I started to enjoy myself.  Even more so when another rider came up behind me, and then as we got to the bottom of the last hill before the finish line, he stopped for a breather and suddenly I realised that I had someone to race against (even if he didn’t know it).

Everything was finally falling into place.

I loved the fourth lap.  The pleasure of knowing that every wheel turn would be the last I’d need to do on that section of track, ticking off the sections, glancing behind to see where the guy was who had ridden me down.

I got to the top of the hill and hurtled down the first section of downhill faster than I had on any of the other laps.  I peeled off onto the single track section, continuing straight down the hill, applied the brakes as I came up onto the sharp left hand corner ready to accelerate away … and just overshot the corner and “thwumped” heavily into a large tree before departing my bike and biting the dirt.

A change in attitude is an amazing thing.  I didn’t think “ah, what have I broken, it’s all too hard, I want my mummy“, instead I thought “Ahh … get back on the bike and ride or that guy will catch you … you can check for bleedy broken things after the finish“.

I still got passed a few times.  I even pulled off the track a few times so as not to slow up faster riders on their last lap, but I still rode with that knowledge that somewhere behind me there might be someone trying to catch me … so I had to ride.

I got passed, one last time, right on the finish line, but it wasn’t my guy so I didn’t really mind.  OK I did, but I’m going to pretend I didn’t because that sounds more sporting.

And that was the end of my race.

I started this write up talking about orienteering, and I did that for a reason.  MTB racing at my level can provide the same challenges as orienteering.

Racing heightens the highs and lowers the lows.  It forces you in a brief, short period of time to face yourself and all your doubts, and again and again fight off those little voices telling you to give up and instead carry on.

You never know what is around that next corner if you just keep going, and it’s amazing how often when you think you can’t carry on, how something happens that gives you the strength to do so.

I’m reading a book by Audrey Sutherland titled Paddling North.  In it she makes this wonderful observation:

“I laughed grimly at my own egocentricity.  I had learned years ago that people are too busy taking care of themselves to be concerned about me. ‘They’ don’t really care what you look like, how you’re dressed, or what you do, as long as you don’t interfere with their lives or self-images. They’ll give you a five-second glance, then go back to their own affairs.  That realization gives you much more freedom“.

…I have that realisation and that freedom … I’ll continue to race my races inside my own head and when it all gets too hard, I’ll just tell myself that it doesn’t really matter because nobody else will ever really know I was there …

… well they wouldn’t if I didn’t write this blog anyway.

If interested you can view my strava data here.