Straw poll of riders on the Trevallyn tracks this morning came up with Sprung and AvantiPlus as the best options for emergency mountain bike repairs and who was I to argue with the locals (especially when I had a full weekend of riding planned and no intention to do it in my granny gear).

So as soon as I got back to the car I called Sprung, explained my situation, and got the best response in the world … “bring it in straight away … we’ll get you back out there.” 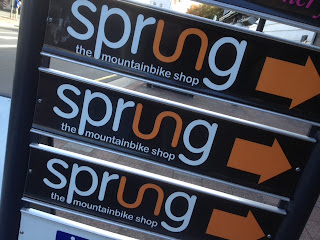 I know they say never judge a book by its cover, but an hour after I made the call from Trevallyn, I was wheeling my bike back out of the shop, the gears were changing beautifully, it had a new set of back brake pads, a diagnosis on several other problems and I’d learned a bucket about Rocky Cape mountain bikes and the tracks around Launceston … and I’d even had time to go out and get a morning latte.

That’s about as good as a morning can get after the way it started … I was back in the game. 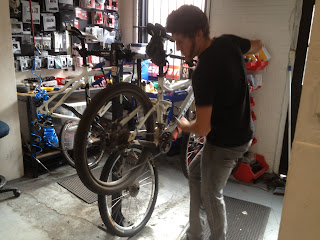 “You’re going up to Kate Reed right? you have to try the new Berm Track if you haven’t ridden it yet.“

“As far as I know you can ride at Hollybank outside of club days – there’s one piece of dedicated single track – tight and twisting not like the riding up at Trevallyn and Kate Reed –  and then there’s gentler trails around the site, but you just have to look out for the Segways that use it now.“

Seems like I wasn’t heading out to Scottsdale just yet …

PS. Just because I’ve put things in quotes doesn’t mean that was what was actually said, but it gives you the gist …  this is a blog, not a referenced journal.