I get up (no, that’s not the mistake), I think to myself … “one cup of coffee won’t hurt” followed by some variation of  “ah what the heck, best make it a double shot.” or “if one won’t hurt, nor will two …” (yes, that’s the mistake).

About fifteen minutes into the bike count, I then start to think “Hmmm … I could do with getting rid of the coffee about now“, then, with very little else to distract me, I spend the next hour doing nothing but think about how good it would be to get rid of that coffee, and inevitably I spend the last 30 minutes of the bike count squirming in the car hating myself and thinking that maybe that coffee cup could do with a refill if you know what I mean.

I know, you’d think at my age I could have figured this stuff out by now, but apparently not.

I counted at the same intersection as last year and was quite excited when I got back to work and compared counts to see my official count increased from 46 to 66 cyclists.  I mean Woo Hoo … that’s a 43% increase, but then I read my own blog from last year and realised that actually 61 cyclists went through my intersection last year … there were just 15 who went through slightly too early or slightly too late, so that’s only a five person increase which is really just a statistical discrepancy.  Boo Hoo. 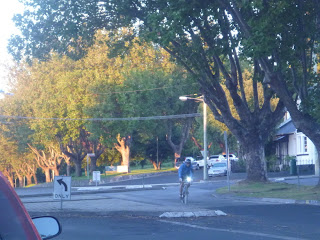 What I did notice this year was the real variation in bikes.  I think I counted four electric bikes, three folding bikes and one guy who was riding his kids BMX.

The other thing I noticed was that if my little intersection was anything to go by, then commuter cycling in Hobart is going European … very few cyclists were wearing Lycra, in fact many were dressed smart casual and quite a few were on relaxed commuter bikes.  I think about half of the cyclists who came up the steep hill from Regent Street were just happily pushing their bikes up the hill so as not to break a sweat … it was very cool. 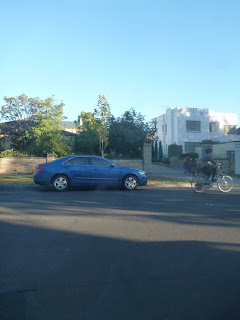 But the cyclists looked way cooler than the motorists, so I’ll think of us as the elite, the trend-setters, rather than just another minority.

===========
PS. I stopped counting cars after 8am simply because regent street became gridlocked after that and it was just impossible to count them.