OK, so maybe I told a little fib in that last blog post.

Maybe travelling all the way up to Scamander just for a one hour ride is a bit of a stupid thing to do.

But what was true about that post was that it was that photo that planted a seed for a destination this weekend, and once I knew where that photo was taken, I was like “Oh, there’s that section of the South Esk I want to paddle (didn’t happen due to very low water levels), there’s the back track from pedalbite.com I’ve been meaning to explore plus there’s lots of options in the Douglas Apsley and Freycinet parks” … so it sounded like a fun place to head for the weekend, and so we did.

After our little sortie around the Winifred Curtis reserve we had lunch up in Scamander and then drove back to the junction where you have to choose to drive up either St Mary’s Pass or head down the coast way … our plan was to do a bit of a circuit around St Patrick’s Head taking in some new trails and old.

Well, when I say our plan, I guess I mean my plan, because Kim as usual was just happy to go with the flow.

Our route started with an expected 10km road climb up St Mary’s Pass … which turned out to only be a 7km climb, with the last three kilometres into St Mary’s actually being downhill.  What’s more, of those 7kms, it’s only the first two kms and the last kilometre which actually have any kick in them … the rest is just a gentle incline and a pleasant way to gain the altitude we needed for this circuit.

Just at the top of the pass there’s a little car park and reserve on the right hand side of the road.  We pulled in here for a breather and discovered a little 10 minute walking track out to a viewing platform … siad walking track also turned out to be a wonderful little section of perfectly ridable single track and to be honest was the nicest section in this whole loop. 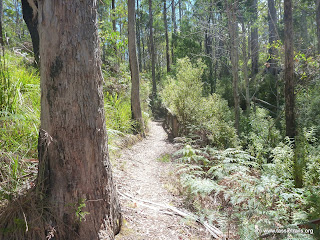 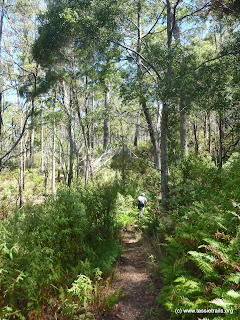 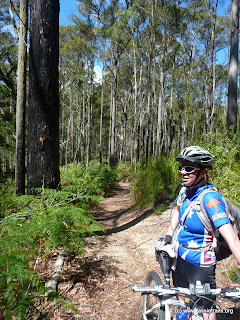 This short out and back track ends at a little waterfall (which had no water coming down it) but I’d still recommend it to anyone heading this way on a bike.

After this detour, we just freewheeled into St Mary’s, where just as we crossed the little creek in town (next to the public toilet) we turned right up Franks Street and started our next little climb for the day trying (on my third attempt) to find pedalbite.coms “Back Track”.  After 500 metres we turned right onto the signed Richardson’s Road which we followed for another 2kms, taking what we hoped was the correct turn into the bush (it was the third, and least promising turn, in about half a kilometre but seemed to best match the route notes on pedalbite).

The track backtracked a little bit as it headed off into the bush on what was a lovely, but iffy, trail for a couple of hundred metres until it joined another track coming in from the right and became more obvious as it continued up a hill.

At the top of the little hill, it was a short, fun run down until we hit a junction which we followed around to the left as this looked like the main trail.  However, we soon found ourselves riding back uphill, and my being certain from the pedalbite tracks notes that this should be a downhill run, I turned back to the junction and went down the, lesser used, right hand trail … which was exactly what I expected … a fun downhill which quickly dropped us out behind someone’s house with (what we thought was the Lower German Town Rd) in front of us.
As we cycled around the house to get to the road, a big dog suddenly came charging out at us … well more precisely at Kim who was behind me.  I only wish I could have got a photo of her face when it caught up with her, but for once in my life I thought I had better be gallant and so I was too busy trying to get between her and the dog so I could kick the stupid thing if it was brave enough to have a go at me and didn’t get the photo.
Fortunately for it (and probably me) it stopped at the property’s boundary and we made good our escape.
So a bit fired up on adrenalin we pedaled down ‘the road’ only to pop out onto the highway to find we were on someone’s driveway with a “trespassers prosecuted” sign out on the front gate.
Oops.
Sorry doggy … fair enough you were just protecting you patch.  As for fr*#king pedalbite’s notes.  Maybe that junction would have been worth mentioning?!?
Putting that behind us, we turned right towards St Mary’s again (we had pretty much done a loop back on ourselves coming back out near the top of St Mary’s pass) but instead of continuing into town, this time we turned left onto the well signed Irishtown Road towards St Patrick’s Head reserve.
This is marked as a no through road … but this only applies to people in cars or those on bikes who don’t like bush bashing.  Neither of which applied to us. 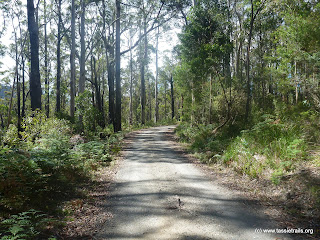 It’s a lovely ride along this road, though I think it’s slightly uphill most of the way.  If it is the gradient is barely noticeable until you get past the St Patricks Head turnoff (which is on your left) and start the final ascent up towards Blue Gum Lodge.
It was here, just as we started the descent, that we came across our one and only snake for the day.  A big tiger snake which was dreadfully unhappy about having two cyclists go flying past and decided to show us this was the case by rearing up and looking like it was going to have a go.  We stopped down the road a bit and Kim was shaking like a leaf from adrenalin.  I thought it was funny, but wasn’t brave enough to say so.
This happened just before we passed the Blue Gum Lodge junction which is about where the road becomes a steep fast flowing, rocky track  … 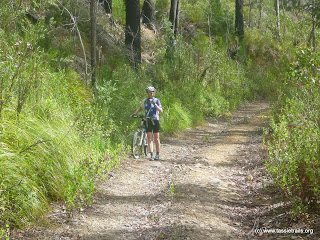 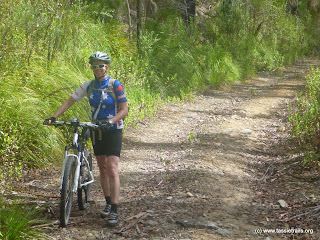 … unless you’re Kim and get a flat tyre as soon as we hit the top of the hill.
Now you have to realise that Kim is still so new to cycling that this was actually her first ever flat tyre.  Faced with this problem, she figured that replacing an inner tube was best done by pushing her bike to me and saying “it needs fixing” at which point she was kind enough to give me the required tools and sat back to let me get on with it.
It was a five minute job and we were quickly on our way back downhill. 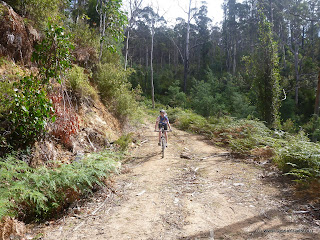 Now I’ve done this particular section before and so knew what to expect, and knowing that, I knew it wasn’t much.

I was therefore a little bit excited when I got to the section where I’d had to start bush bashing last time only to find that someone had been through and done some clearing work.
Unfortunately, the clearing work didn’t go very far and before I knew it, we were backing trying to ride through heavily overgrown sections with deep washouts and way too many fallen trees …

but all scratchiness must come to an end, and soon we were out onto Davis Gully Road on our way out to Four Mile Creek. 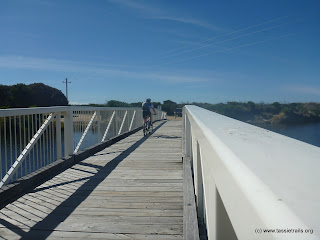 From there it was another 8kms or so back to the car around the coast (on the main road).  It was pleasant, fairly flat and fast, riding …  it was also hot.

It was still good to get back to the car and head up the highway to St Mary’s where we’d booked a bed for the night at the hotel.

Epilogue:  Kim was keen to get to the hotel for a shower, but I was obsessed by the Back Track route, so I got Kim to drop me back up Richardson’s Road, although this time I took the second junction (1.8km) from the start of the road which, as I expected it would,  met up with the less distinct trail we had headed out on before.
This time though when I got to the junction where we’d gone right, I instead continued around to the left on the main track (despite how much I wanted to see that dog again) and sure enough after a bit of an uphill section (through some lovely forest) … 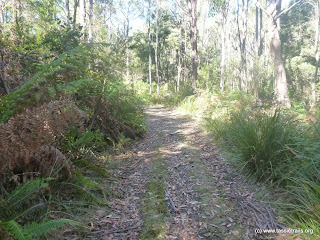 I dropped out exactly where I should have … on Lower German Town Road.  Strange thing though was that the track seemed to be as much uphill as downhill, and it was the road itself which was a steep, fast descent.  Not a track I’d rave about, but it was a nice way to add distance to the loop.
All up, the loop was around 35kms, plus I covered another 5kms with my extra loop.  So with our earlier ride that was a 50km day which was good.
We ordered up big for dinner at the St Mary’s hotel …
… and then I struggled to finish half my nachos and only got through a third of my bangers and mash.  Eye’s as always bigger than my stomach (and for those who know me, that’s saying something).
We were in bed by 8pm.
The Garmin GPS route (including the ‘dog’ leg) can be viewed here.