Here’s a funny story … Or at least it would be if it wasn’t true.

You see “Plan A” for today had been a paddle down the South Esk river from Fingal in the pack rafts, but checking the river levels on our drive out here on Saturday it had become pretty obvious that there wasn’t enough water in that river to drown an echidna, never mind go rafting.

This hadn’t bothered us overly as we were both pretty happy to go explore some of the trails at the northern end of the Douglas Apsley National Park … either on foot or on bike (I was leaning towards biking, Kim was keen to go for a walk to Heritage Falls).

So, last night we are sitting having dinner at St Mary’s Hotel and I look out the window and see three Parks & Wildlife fire trucks drive past heading toward Scamander and so I remark to Kim that there must be a fire to the north … maybe where we were just riding.   I jump onto the www.fire.tas.gov.au website to see where it is.

What I found was this …

The fire wasn’t to the north. These guys were heading home from fighting a fire at the northern end of the Douglas Apsley National Park …  a fire which had been burning for nearly two weeks.  Maybe I should have known that seeing as how I get the daily fire status updates sent to me at work.

What’s worse … as I stared at the fire boundary on my iPhone and then looked at the map we had on the table it became obvious that they were right on top of each other.

That’s when I saw the kicker in the last line of the fire alert “Douglas Apsley national park remains closed.“

… and just like that, plans B through F went up in smoke.

So, that was last night.  This morning we wake up without much of a plan on what to do, and so were happy to be guided by the fact that we were both hungry (me especially having not eaten much of my dinner) there was nowhere to get breakfast in St Mary’s, but we knew there was a decent bakery in Bicheno and so off we went (it sort of worked in with the one remaining idea we had of going for a ride along Friendly Beaches anyway).

Over breakfast we both decided we weren’t feeling particularly motivated, and Kim suggested that she would be happy just sitting on a beach for an hour or two.

Having brought two books (well six if you include the four I had just downloaded onto my ipad) and three magazines to read over this weekend this sounded ideal to me, so we set off down to Friendly Beaches where we could enjoy the sun, solitude and the beauty of an unspoiled beach ….

But … no … turns out this wasn’t quite what Kim had in mind, so we jump back in the car and drive down to Coles Bay for second breakfast and then onto Sleepy Corner … surely that would be an ideal place for a lazy lounge, read and snorkel? 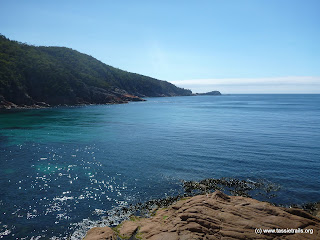 … but again ….  no, this also wasn’t quite right …. you see, Kim had never actually been to Wineglass Bay, and well … wouldn’t that be a nice beach to go to? (she says oh so sweetly like I might actually have a choice in the decision and this hadn’t all been engineered from the start).

It was off to Wineglass Bay … 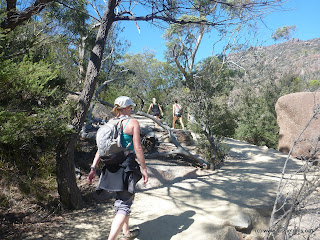 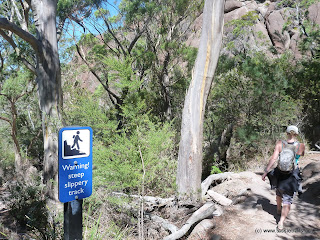 I decided to make the best of this situation and so carried my packraft over with intentions of exploring off around the coastline… although when we got there it was too windy to actually use it.

However, embracing the philosophy that life is about making the most of where you are – the unplanned adventures –  I just swam and enjoyed trying to take some weird camera shots instead …

Whilst I was out playing with my camera, Kim also finally found what she was looking for …

… a beach she could relax on.

And that is how you plan and execute a weekend. 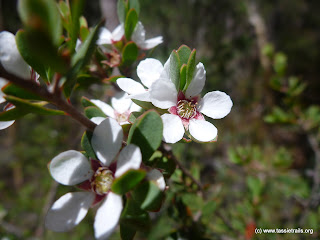 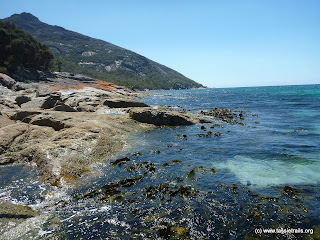 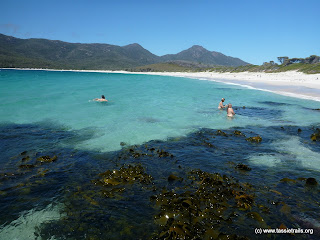