I hate leading paddling trips … and yet despite this aversion, every couple of months I still seem to find myself putting  a trip on the club programme with the goal of offering something “a little bit different” than what is usually offered.

This time, I decided to put on an exploratory three day trip up on the North West Coast.  My goal was to try and spend some more time enjoying the coastline that I raced along back in the Bluff to Bluff race in October last year …

I had four takers from the club for the trip, plus Stephan and Troy decided to tag along for the weekend (but with the intention of doing their own thing).

We had all planned to meet up at the Beach Retreat Tourist Park at Wynyard on Friday night, which should have been easy except the owner was absolutely insistent that we could only stay there if every one of us arrived before 7pm … somewhat challenging for those of us coming up after work (me), and in the end despite leaving work at 3pm, the huge amount of roadwork that is currently taking place on our roads, still meant I didn’t get there until 7.30pm and had to sneak into the park quietly (thankfully Veronica had already checked me in and had my key) and set up my tent.

We were doing a basic skills trip, but the weather forecast for Saturday was anything but … in fact the forecast look downright scary peaking at 20 knot winds and 2.1 metres seas.  We had a bit of a discussion about this as a group and in the end decided to break into two groups … Veronica, Mike and I decided to go for a downwind run to Somerset in the morning and “have a play”, whilst Andreas and Justin decided to potter around in the sheltered waters and river near camp and then come pick us up at the other end.

With these plans in place, we put onto the water and into the unknown … 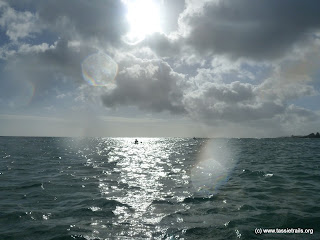 Now, you might think that as the “coordinator” for the trip, I wouldn’t go out into conditions that were beyond my skills.

Well, if you thought that, you obviously don’t know me because you’d be wrong.

I can tell you that I was pretty much terrified for the whole time it took us to do the run, because unlike my ski which tracks beautifully in a following sea, my sea kayak behaves like a bucking bull … every time a sizable wave comes up behind it, it kicks out its backside and throws me side on to the wave where I have to brace before turning myself back downwind and repeating.

Thus followed a comical endeavour with Veronica having a brilliant time chasing down all the runs she could get onto, Mike sitting back with his sail up, barely touching his paddle enjoying the scenery as he was blown downwind, and me paddling as hard as I could, trying to keep up with them for dear life so that when I did capsize they would be around to save me.

Is there a word for someone who is both terrified and having the time of their life at the same time?  If there is then that describes how I was feeling … maybe the word is simply “alive“.

We cut inside one or two reefs, which was (understatement of the year coming up) … a bit bouncy … but we still got down to Somerset upright and OK.

However that is not the end of the story for there was still one slight problem … between us and the shore (once I’d actually managed to find our exit point at the surf club) was a big series of waves (gulp).

I did have a plan for this which was to paddle into the nearby river thus avoiding a beach landing, but when we scouted this out I discovered another problem – at high tide the water came right up to the bridge which is at the mouth of the river.  This left us with the option of drowning under a bridge or trying a surf landing on the beach.

The beach it was. 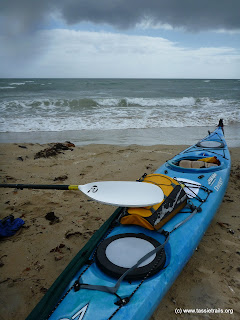 I went in first, but just as I got through the first surf line, a big set of breakers came in behind me and I decided to peel off and come around for a second go.  BY the time I had gotten back around and lined up, Veronica had managed a succesful landing and she was followed soon after by Mike.  I don’t think either of them even got wet.

I set off for my second attempt after waiting for a lull in the sets, and paddled, and paddled, and paddled my little heart out to try and get in … if you’ve never done this then it can be strange because with a bit of backwash you can be 10 metres from shore, paddling with all your strenght, with waves coming in behind you … and yet you are still not going forward.

However, I did finally get to shore only to then step out of my boat and fall into the water, capszing my boat in the process (and I swear this is true).