After our morning escapade, we decided as a group to have a more relaxed paddle up the sheltered Inglis River in the afternoon. 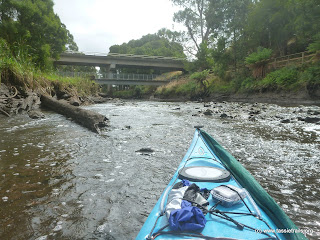 We were again able to put onto the water right in front of the campsite at the head of the river, though this time we turned left instead of right and headed up the river.

It was a very low tide (and still going out) when we began our paddle, and the section up to the first bridge was all open estuary.  This meant that in between dodging sand banks and fighting wind and current I don’t really have much to say about that section. 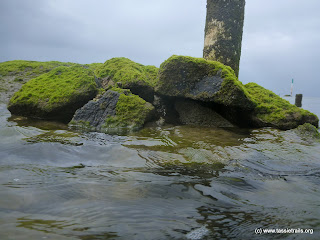 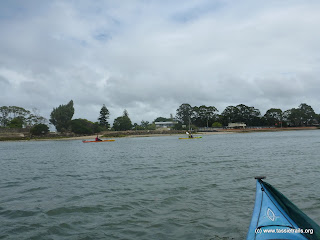 However, once we got above the first bridge, the river very rapidly narrowed and paddling became much more scenic and pleasant.

By the time we reached  the second bridge (our target for the trip about 5kms upriver) we had slowed to a crawl as we darted from one side of the river to the other trying to avoid submerged logs, rock banks and many other underwater hazards brought about by the low tide … it was great fun.

After a brief rest (where I demonstrated how not to paddle up a small rapid), we let the current begin to take us back downstream, and I moved out in front of the others so I could play around with some different camera angles …

That’s when I started to hear a bit of commotion in front of me, and turning back downstream I saw a guy in the distance on the track above the river (there is a pretty impressive 6km bridge to bridge loop walk around the river) calling to his dog which sounded (from all the splashing I could here) like it had gone into the river and didn’t want to come back out.

I couldn’t see the dog at this point, but there were a few water-birds around, so I assumed it had found more interesting things to do than return to its master and was just off doing them.  I had a silent chuckle to myself as I continued to drift downstream listening to the commotion in front of me.

About thirty seconds later, the guys calls had got quite a bit more urgent and his wife had also joined in calling for the dog.  It was at this point that I drifted around the corner and saw a bit more clearly what was happening.  The poor dog looked like it had walked out on a slippery log, fallen in the water, and was trying to get back up onto the log which was between it and the shore.

It wasn’t having any success, and looked to be rapidly tiring itself in the process.

As I began to digest this I automatically picked up my paddle and started gaining a bit more speed towards it, noting that it was still a good distance away.   The ladies calls quickly became extremely distressed as the dog started to float backwards into midstream and its head started going further under the water.

I was quickly into full stroke as I watched this poor old lady try to scramble down a steep, slippery grass slope to get to her dog, but just when I was about to call out to get her attention I hit a rocky bank at full speed taking a very considerable section of my kayaks hull off as I scraped across and down the other side.  Fortunately I think she heard that as she seemed to notice me for the first time.

This was all happening very quickly, but still all that was sticking out of the water by this time were the dogs eyes and nose … it must have been very weak because it was sinking really fast.  I ignored my poor boats hull and fired back down the river (Veronica in hot pursuit behind me at this stage) and I just managed to get to grab the poor little things collar as it floated further from shore and deeper underwater.

Fortunately it was only a small dog, and I was able to pull it up onto my spray deck and paddle it into shore (where it was very unkeen to jump back off my kayak and into the water, but very happy to get back on dry land and back to its owners).

Our job here done (yes, you can call me a hero if you want) we continued our drift down river where we got to watch another (slightly more spectacular) near drowning as the local youths launched themselves off this massive rope swing and out into the water. 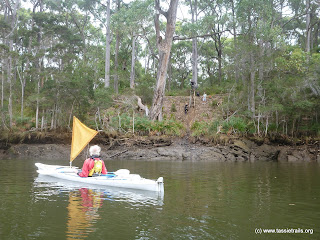 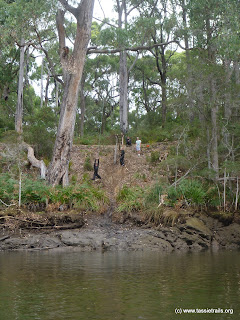 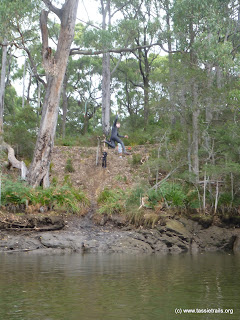 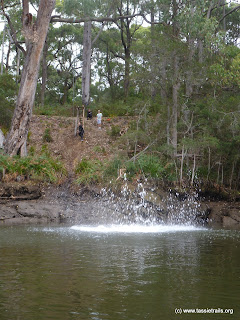 Then before we knew it, we were back at camp … except the tide had continued to go out … way out … 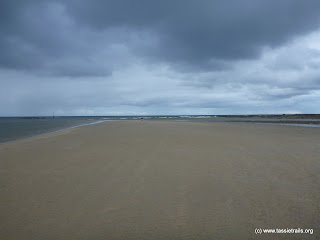 … If you look way at where the sand meets the sky in the middle of this photo you’ll see a small black dot … that’s Mike and his kayak.  Quite a carry back to camp.

All up, I think we were all in agreement over dinner that night that today had been a pretty good entrée into North West Paddling .. tomorrow though was the main course … a paddle around Rocky Cape and I couldn’t wait for that.