Participating in this event was the reason why Kim had been doing so many rides with me lately.  To be more specific, I’d mentioned to her soon after she’d bought her bike that she should join me for this event.  I seem to vaguely recall that it was meant to scare her off or something (I mean what kind of cyclist who is scared to ride on roads, and who thinks that a 3 or 4km ride into town is a good effort would enter a six hour mountain bike rogaine on Hobarts Eastern Shore?) but instead she wrote back immediately saying “Yes” and from that the rest followed.

So anyway, if you have no idea what a rogaine is, basically you get given a map something like this: 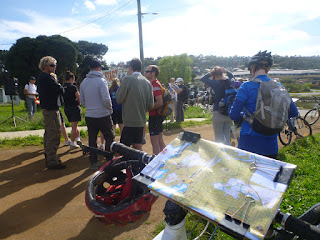 The map has lots of control points all over it, usually worth between 10 and 100 points each, and the challenge is to decide the optimal route that maximise your score inside the event time, oh and then there’s the small detail of actually having to go out and find those controls, adapt to changing conditions and random events (such as this time one of the controls had been hidden).

The critical thing to know about a rogaine is that every minute you come in over time, you lose 10 points, and if you’re more than 30 minutes late … well you’re disqualified.  Having previously experienced the pain of pushing myself in a rogaine with C just to gather an extra 60 points in the last hour of an event, only to make a navigational error (river we couldn’t cross) forcing us into a detour where we arrived exactly 6 miuntes late (losing all 60 points) I can tell you the number one rule of rogaining is to NEVER be late.

So anyway, Kim agreed to my strategy that we’d each get our maps and spend 20-30 minutes digesting it and individually deciding the best route, and then we’d get together and compare notes and agree on an optimal course.

This is what we came up with for our starting strategies: 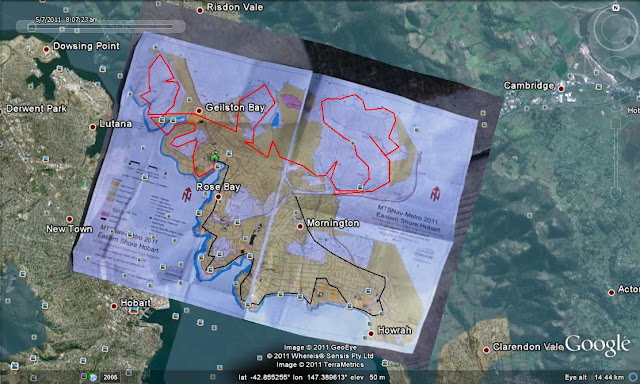 My route is the red line, Kim’s the black line and the green house is the start/finish point:.

Not much of an overlap to work on was there?

My route was 100% focused on maximum point accumulation, and a maximisation of options at the end to allow for us to adapt and modify the route home depending on how we were going.  It pretty much went everywhere that was steep and tough seeking the big point controls.

Kim’s course was aimed at being easy, scenic, keeping her off the roads and away from steep hills and somewhat bemusedly her interest in cycling through the section which read “Dangerous Magpie Here”.

Some frantic discussion was held, I outlined the genius of my route, and then was beautifully stonewalled into agreeing to take hers.  This of course was not capitulation on my part, it just shows my peace making qualities.

So with a sort of route sort of decided, we got ready to head off and just after 10am we set off with all the other riders for six hours of fun.  I was somewhat surprised by how many people were going our way.  Surely this was the wrong way to go? after all it’s not the way I would have choosen.  Then again, my experience is that on the odd occasions I do well at a rogaine, it’s not because of my fitness or skill, it’s usually because I go a completely different way to everyone else.

As usual for me it took a while to get into the map and so it wasn’t a great start.  Kim didn’t quite have the same urgency I had to get into the race, I took a few poor route choices on the way to the first control and spent too much time watching other people and not the map leading to a lot of wasted time as I rode past the first control. Most annoyingly of all though my bike had developed a high pitched screeching noise in the rear wheel which I could not get rid of.  As it turned out I was to be stuck with this for the rest of the day.  This was particularly annoying given I’d just forked out nearly $300 to get the rear wheel fixed just 2 weeks earlier.

However, after stuffing up the first control, I then took a slow cautious approach to get into the detail of the map on my way around to the second control, and then ripped lose.  We overtook, and then dropped 3 or 4 teams as we wound our way from Gordons Hill, around under the bridge and to the Kangaroo Bluff Fort, before powering our way through the Bellerive controls.  Kim had caught onto my idea somewhere around the bridge that fast is good, and we were motoring along as a team.

By the time our first decision of the day (whether to go out and up to get two controls out in the Tranmere Hills) was upon us we were well ahead of our proposed schedule so picked these up without a second thought.  We even caught and overtook another team on the way.  We were flying, well to be more exact we were navigating to the controls more easily than the other teams.

We made a bit of  a boo boo as we headed back through upper Howrah (mistakes are always plural when I make them) and I went into a head spin and seem to recall restating the line “But it should be here” several hundred times before realising that this attitude wasn’t actually going to make the control appear, so instead I moved to where the control most certainly should not be, and of course found it.

We took off to lose another team, only to have my map board come loose, and I had to watch miserably as we were caught and overtaken after our fine effort.  However, as we made our way into the Knopwood Hills, we watched as the team that had just overtaken us appeared to miss a turn, and so managed to slip by, grab the control and get the heck out of there.  A quick shuffle across the highway and a technically legal, but somewhat dodgy descent into Mornington Hill Reserve and we pinged yet another control despite the complex map detail.

At this point we decideid to reward ourself with a lunch stop tore-enrgise ourselves before the very, very steep ascent up to the top of Mornington Hill and then the fun ride back down again.

The only big decision came near the end, we were 5 hours 15 minutes in and had to make the choice over at Government Hills on whether to try and get up to the top and pick up a 100 point control, or whether to make a safe return.  After my dismal endings in the last few rogaines, I so wanted to let Kim’s rational argument for a safe return sway me, but I couldn’t … I had to gamble, at least a little bit on achieving a big win, rather than the safe return.  I mean what if we lost by just 90 points and we had to look back and say “if only….”. So we compromised and Kim gamely agreed that we’d go out for 15 minutes and see how close we could get to the 100 point control.  We turned ourselve inside out to get there, but 15 minutes later, with just over 30 minutes to get back to the hash house, and with the 100 point control still a kilometre away through tough terrain we had to admit defeat, turn tail and belt back to the finish picking up the last three controls on the way there.  We got home with nearly 10 minutes left on the clock.  A brilliant rogaine.

It was only later, when I was posting the scores up on the Rogaining Tasmania website that I got to look at our scores … we’d come second in our division, and we’d lost by just 50 points … so if we’d pushed for the 100 point control, even if we’d skipped one of the 30 point controls on the way home we’d still have won.  I’d like to say I was devastated, and yes a bit of me was, but really – it was a great day, and who therefore really cares?

Just to finish off a near perfect day, I headed up to Allan Lee’s that night to watch a DVD of a recent kayak crossing of Bass Straight by members of the Tasmanian Sea Canoeing Club.  Completely inspiring.