Some days are extraordinary and some days just suck.

Then there’s the days that do both … like today.

You see I think it is extraordinarily cool that I can get up out of my own bed, drive 300kms to the other side of the State before most people would have finished having their breakfast, go for a five hour mountain bike ride through our gorgeous Tasmanian Wilderness World Heritage Area at the end of a 30km road that most people wouldn’t even know exists …

Eight hours and 600kms of driving, five hours of mountain bike riding, 3 coffees, 2 cokes (one six months past its used by date) and a chance to visit one of Tasmania’s most epic environmental battlegrounds …

But then here’s the bits that sucked.

Maybe I should have known the day wasn’t going to go so well when I woke up with what felt like a hangover (I hadn’t been drinking), but I shrugged it off and decided I’d push through.  I didn’t, and by days end I had a headache that felt like a jack hammer was inside my head, a bad cough and a temperature.

Maybe I should have gotten another hint when I bought my ‘half way’ coffee at Ouse only to find it was so disgusting that I could barely drink it … but I had got chatting to a guy who was walking the Tasmanian Trail and was so caught up swapping track notes and advice that again I shrugged it off and continued onwards.

Yep, I drove to the start of the track, unloaded my gear at the locked gate and happily set off up the first hill to see what the day would bring.  I told myself I was exploring new trails and therefore I was happy, no arguments to the contrary allowed.

Now I expected there to be climbing – lots of climbing in this ride.  I had done a bit of homework and looking on Google Earth realised that this ride wasn’t flat  …

but those climbs looked fairly gradual and all up it was only 1000 metres of climbing over 22kms with the added advantage of what looked like a pretty nice downhill run on the way back.

This ride is a monster.  It takes the worst elements of the Yo Yo Track (up – down – up – down) and just scales it by 2 or 3 times with both the climbs and the descents being absolute brutes.

Here’s what it looks like from a GPS perspective (noting this is an out and back and I turned around at the 18km point on the above route):

Those climbs look a bit steeper don’t they?

Don’t get me completely wrong here – it is a magnificent ride with lovely bits of track winding through forest, interesting history (from the Franklin Dam protest days) and amazing wildflowers and scenery including cool views over to Frenchmans Cap and down to Macquarie Harbour  … 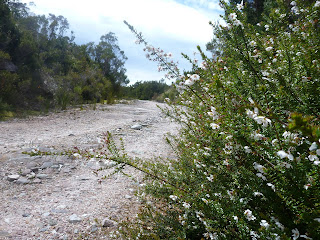 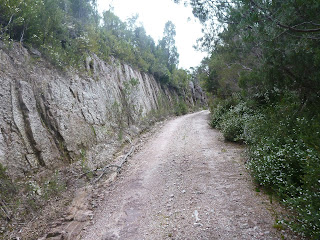 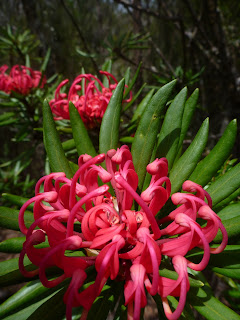 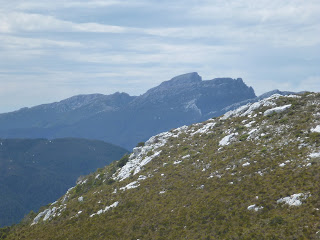 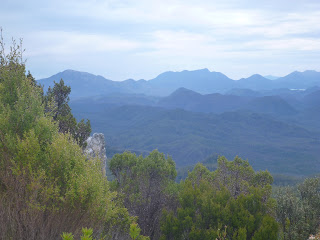 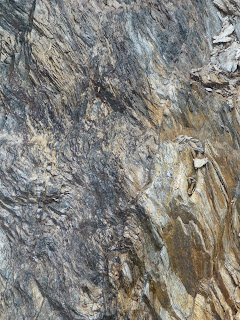 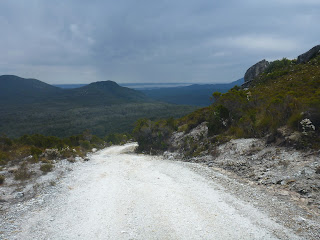 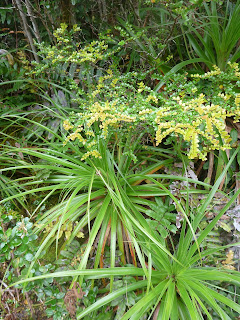 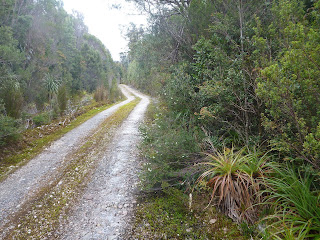 But I was expecting washed out and rutted four wheel drive tracks (fun, fun, fun), and it isn’t that at all, in fact I reckon if the gate wasn’t closed I could easily have got my Subaru Impreza the whole way along the track … it is a good gravel road most of the way.

But it’s so steep.  I ended up pushing my bike up half to two thirds of the ascents, and what’s worse I wasn’t really able to enjoy the descents due to a combination of loose pea gravel surfaces and way too many snake sightings for my liking (they seemed to enjoy coming out and lying on the nice open track to sun themselves right where I wanted to ride).  Combined, the snakes and surface made me very cautious as I headed down around blind corners and stick strewn trails (is that a stick or a snake?)

Then the real bit that sucked hit me.  After a bit too long on the brakes due to the above caution my back brake started making a very un-nice squealing sound.  A quick check just out past Mt McCall found that I was 18kms from my car and 300 and something kilometres from my nearest set of brake pads … and I needed them NOW.

Remember that route profile above …. I had a lot of downhill riding to do … and no bake brakes to do it with.

The other thing that sucked was my expectations (as per the above paragraph) about the route profile (Remember that route profile above) ie. that it is downhill most of the way back.

Well, if you’re like me, your eyes would have been drawn to the long climbs to the highest point on the way out and your brain would have fogged over all of the short steep climbs on the way back (heck I thought, I’ll just get a run up and roll up them, completely ignoring that they were often 100 metre ascents).

Those climbs on the way back are killers if you’re tired and feeling sick.  I think I was almost crying at one point I was so over this ride, I do remember a brief little scream at the gods for the unfairness of it all. 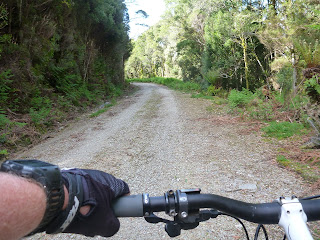 But I made it, and yes deep down I enjoyed it, even if I didn’t get all the way out to the Franklin River exit point (I turned around about a kilometre past Mt McCall and about 3kms (and a 400 metre descent / ascent) before the rafting pick up point.

I had also planned staying overnight in Queenstown and doing another ride the next day, but with no brakes and feeling sick there was little use in doing that (lesson learned in being prepared, although in my defence I do usually have a spare set in my car, I had just used them up for the Goldfields Track and not got around to replacing them) and hence my epic and extraordinary out and back day.

I’m now struggling to decide whether to put this on tassie trails, because I can see that there would be the rare cyclist that would actually enjoy this ride.  They’d just have to like remote locations, and be fit and know what they were getting themselves into.  I would wear ankle gators if doing this ride again for the snakes.

If I decide not to do that, then the GPS data from my trip is here.