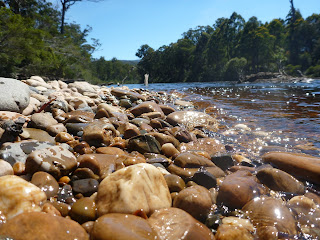 Perspectives also shape how you think about things.  For example, I’ve capsized in enough rapids in my life to know that underwater is not a good place to be.  This has led me to the perspective that rivers are dangerous places, even if they don’t always look so scary … 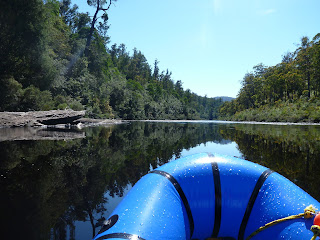 That’s why I was really glad when Kim agreed to come and packraft the Huon River with me this weekend … I figured if I was going to drown, I should at least have a witness to the event.  I guess that’s another perspective.
That’s not to say that the section of the river that I planned to paddle was big … in fact in the scheme of things it was tiny … grade 1 & 2 rapids which most kayakers wouldn’t even get out of bed to paddle.  But I’m a wuss, and the river was completely unknown to me so just knowing that there were rapids was scary enough for me, especially as I had vague recollections that there was a dangerous weir somewhere on the river …
So after a crappy breakfast at Banjo’s (hint: don’t try and tell Kim that ‘big breakfasts’ always come with hollandaise sauce on the eggs, I still feel sorry for the poor guy who tried to tell her that) we drove out to Judbury and left a car and dry clothes there before continuing on to our launch site just next to the Southwood Site (Huon Wood Centre) 15kms further up the river. 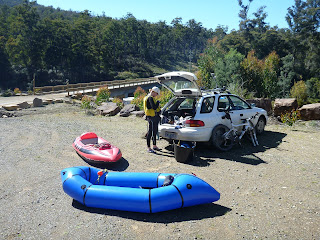 We quickly pumped up the rafts and before I could think about it too much, we got on the water and drifted downstream.  All too quickly we were too far downstream to do anything about it but continue on down the river and see what we would see.  It was very Huck Finn.

Fortunately for my nerves, the first few rapids were just little grade one shingle rapids which gave us both a chance to get a feel for how our boats handled the waves and to realise that we weren’t likely to die this day.  In fact a few kilometres in I was boldly suggesting to Kim that we should have brought the monsters with us (not that they would have come given that they’ve both now shaken hands with Prince Charles and Lady Camilla and as such would no longer deign to get into any water craft smaller than the QE-II).
We drifted downstream, actually enjoying the occasional rapid, and noting the changes along the river (like a house built in the bush which wasn’t there a few years ago which explained why you could no longer cycle down the western bank).

Just before our first real rapid for the day a platypus popped up before us and we got to drift downstream as it kept us entertained diving down and surfacing repeatedly.

Then we hit the first little drop for the day.  It was one of those rapids that sounded a lot louder than it looked and so I curiously approached it wondering how such a small rapid could make such a lot of noise.  It wasn’t until I got right onto it that I suddenly realised that it had about a half metre drop (and hence the noise) and so thinking it was my dreaded weir I yelled out to Kim to just paddle hard and went for it … turns out it wasn’t the weir, and it was dead easy though I did get a bit of water in my boat so we pulled off to empty the rafts and stretch the legs. 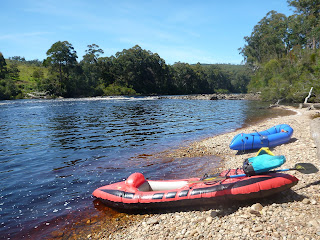 Of course once we got off the water on a small shingle bank on the left hand side, I then looked across to the other side of the river and noticed the lovely beach stretching up into the meadow behind it right across from us.  Doh. 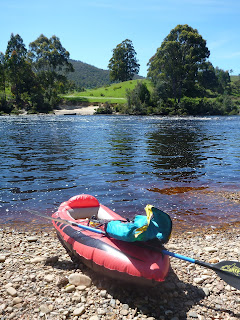 There were a few long flat sections after this, but then we came up to another one of those rapids that sounded a lot louder than it looked, and fortunately this time I decided to head into the left hand side of the river and check it out.
This rapid was my weir. 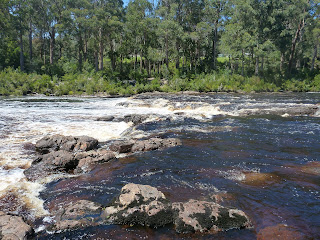 However, it looked quite possible to paddle it on river right if you don’t mind a few bumps and scrapes over the rocks.  We chose to portage it though (perspectives again).

After this it was an easy meander down to Judbury with just a few more small rapids and we just enjoyed ourselves and the sights around us. 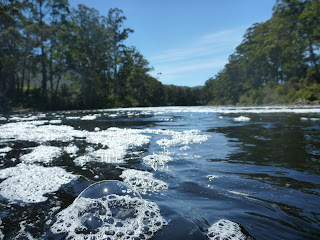 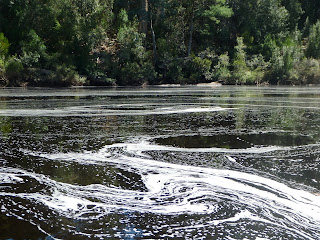 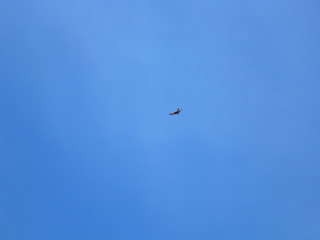 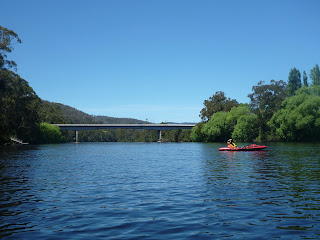 Yep, not a bad day at all as we covered the 15kms in about three hours.  Amazing how a good day on the river can change your perspectives …  I don’t think I hate rivers anymore.

However, given we’re talking about perspectives, I wonder what Kim’s perspectives are on Lantra Sportswagon’s after today’s trip … 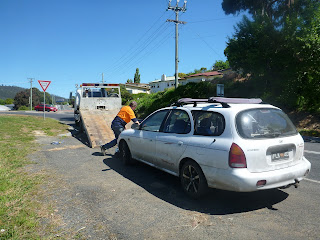 I reckon she might think they’re expensive pieces of junk and that she should get a subaru … or maybe that last bit is just my perspective again.