Skip to content
A strange thing happened at the Four Springs Enduro the other weekend … I didn’t have the urge to hurt myself. 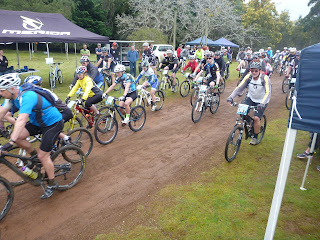 I mean I still raced, but on several occasions when I had a rider come up behind me I pulled off much earlier than I had to in order to let them past, and on at least one occasion where I had a rider in front of me that maybe I could have chased down, well, I just didn’t.
This brings me to Wednesday.

4.30pm on Wednesdays I have to make a decision – I either walk out the door at work and ride home so I can grab my kayak and go paddling, or I don’t and I miss the window of opportunity to get on the water by 6pm when the evening paddles leave.

This Wednesday, as my calendar alert went off at 4.30pm telling me to go paddling, I found myself inventing a number of small ‘urgent’ tasks that just had to be done before I left.  I kept telling myself that I will go kayaking, and yet that scheming voice inside my head knew that with all these tasks,  maybe despite my best efforts I’ll just be too late … the time crept onto 4.50pm before I finally got out the door.

But surprising even myself, I did get home, and I did grab my boat and head back down into town, and I even managed to get ready to be on the water with about 30 seconds to spare. 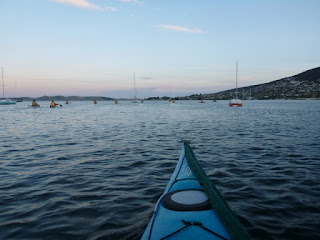 As always it was beautiful paddling out onto the river Derwent as the day faded into night, and I found myself at the back of the group having a catch up chat with Terry and then just paddling in my own space as we clicked off the 7.5 kilometres down to the turnaround point off Crayfish point just before Taroona beach.

After the usual rest and regroup I started paddling back with Mike and that’s when something strange happened.

We were just chatting and paddling along, when I noticed in a conversation lull that Mike had very quickly pulled half a boat length in front of me (note: he started it).  I put in a few paddle strokes to catch up and then I put in a few more to get in front, and then next thing I knew we were both going full guns trying to catch two other boats about 50 metres in front of us.

Problem was when we caught them (and ignore any feedback that they may make about being provoked by comments about how slow they were going from us, which of course we would never do) they gunned it as well, and I suddenly found myself being right on the edge just trying to keep up.  That’s when it dawned on me that they were probably in front of me for a reason … like they’re faster, stronger paddlers than me.

Anyway, we had soon all put in 2 or 3kms at full tilt, when Terry, who was in front of Mike, pulled off to go ashore as he lives in Taroona, and I thought “A ha, here’s my chance to get ahead of Mike” … except when Terry pulled off, he cut me off Wayne’s tail and suddenly I found Mike was the one with a tow up front and I was left by myself having to paddle like mad to get back onto Mike’s tail.

Somewhat displeased by this turn of events, I got onto Mike’s tail and I plotted.  It was now full dark and we were heading into a pretty stiff breeze, so I just sat there for a few minutes until I felt a lull in the pace and then surged out with the honest to god intention of trying to move all the way to the front and then pull away … except Mike and Wayne accelerated when they saw me going past (I guess I should have thought of that possibility, but it honestly hadn’t occurred to me) and suddenly I was sitting beside Mike going full force into the wind and he was beside me still nicely tucked behind Wayne’s kayak.  I could see his smirk even in the dark.

This was not the plan.  I therefore needed another one and that’s when I stepped over into Plan B.

Now you see Mike is not someone who races, and furthermore Mike is an all round friendly good guy.  With this background, it is probably understandable that Mike had no idea what to do with himself when I promptly turned my kayak into his and basically rammed him.  Well not quite, it was more a constant edging over into his line until he basically had no choice but to give it up, but it was the same thing in principle.

To his rather emphatic enquires about what the heck I thought that was all about, I enquired (with as dead pan a voice as I could muster) what he was referring to, and then explained (like a teacher to a student) that what I did was perfectly acceptable in race conditions and people did it all the time … I even managed to inject a bit of surprise into my voice to try and capture my hurt feelings that he felt what I did was outside the norm.  It was a masterpiece of acting, and no doubt I shall get a long lecture from Kim about being more honest when she reads this.

With that off my conscience, I went back to my planning and scheming.  Mike was as good as history.  Now it was Wayne’s turn.

We were not far from rounding Blinking Billy Point and it was obvious that Wayne was aiming to go as close to the point as possible to try and shake me in the bounce, so I did the unexpected … as we came close to the point I aimed off on his outside and paddled off into the darkness.

Although I wasn’t sure it would work at the time, it turned out to be a master-stroke as I was two or three boat lengths in front of him and still accelerating away before he even realised I’d left his tail.

That’s when I realised that all this effort was hurting, like really hurting, and it … felt … good.

I settled into as fast as pace as I felt I could hold for the last 2 or 3 kms back to base and just paddled concentrating everything on my technique and using my big muscles as much as I could instead of my arms.

Then I tried to go a little bit faster and hurt some more … just in case either of them had any idea of trying to get back on my tail.  I rounded Sandy Bay Point, and was feeling good when suddenly I noticed a movement to my right, and glancing back I saw Mike coming up alongside me… he was still there the whole time.  What kind of gentleman would do that?  I take back everything I said about the son of a bleep.

I dug into my reserves just a little bit more and tried to do 20 quick accelerating strokes to open a gap and as luck would have it just as I started into my second set of 20 the wake of a large boat came up behind me.

Now unlike my fellow kayaking club members I’ve been getting used to catching waves in my ski, so I quickly changed my rhythm to paddle 5-7 quick, powerful strokes to catch each waves acceleration as it came under me, rested 2 or 3 strokes until the next wave and then repeated.  Using this method I could feel Mike drop off behind me and I knew I was finally on my own.

After the last of the wake went past, I saw the light of one of the slower paddlers who had turned around before we got down to the far end, about 200 metres in front of me, so I just focussed on that and reeled that light in as fast as I could. As I pulled up alongside, I realised it was Jai, so I dropped my pace to match hers and waited the (rather satisfying) 30 or so seconds it took for Mike to catch up and we paddled the last few hundred metres back to shore together.

Wayne pulled in a couple of minutes later, but in his defence he did all of the early work so I wasn’t surprised.

20 minutes later we were all sitting down at the Wood Fired Pizza at Sandy Bay telling different versions of our impromptu paddling challenge … it was a good feeling knowing that the urge to hurt myself is still there, even if I don’t use it every day.

With the Tullah Challenge coming up on November 10, and with Kim deciding she’s going to solo it, I’m going to need every bit of my ability to hurt myself (and to use unscrupulous race tactics) if she’s not going to finish at least three months ahead of me … or I guess I could train and diet.

Nah, hurt and cheat it is.