Did you know that if you stare at a map of Mount William National Park long enough, it is possible to convince yourself that if you could just get across a couple of significant looking creeks, 10+ km of beaches, a few headlands and if, just if, those fire-trails around the park are cyclable then it might, just might, be possible to cycle the whole way around Mount William National Park in a day. 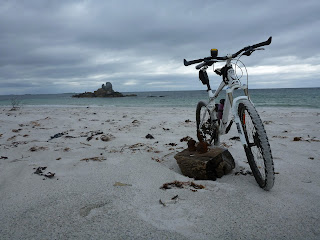 I did, and without necessarily going into all of the details above, I convinced Kim that it would be a jolly good idea if, instead of entering the Freycinet Challenge this weekend, we instead went for a bike ride “up around St Helens”.  I didn’t think she needed any more detail than that.

She of course agreed this was a jolly good idea (I think I could say “Hey, let’s fly to the moon and go for a ride” and she’d think that was a jolly good idea as well) and that is why we pulled into the rather deserted Deep Bay campsite (about 60km north of St Helens and 3km north of Eddystone point) about 8pm on Friday night after four hours of driving and a rather stressful last hour playing dodge the kamikaze wallabies.

That said it was rather grand (after putting up the tent in the dark and realising that the mosquitoes stop chasing you if you turn off your torches) just sitting outside listening to the surf under a grand panorama of stars and thinking that a short time ago I was sitting in an office in Hobart.  Rather grand indeed.

We slept with the tent door open so I could just watch the stars all night … as I lay there wondering just how the heck to tell Kim that I’d gone for a wander to the creek after setting up the tent, the crossing of which was to be out first significant hurdle for the next day, and realised that there was a reason it was called “deep creek”.  It looked to be a rather daunting crossing in my torchlight at night, in much the same way that going for a bike ride on the moon also seemed like rather a daunting idea. 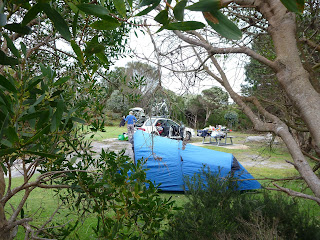 The next morning I was rather glad to see that our tent was just set up next to a wide section of the creek and that if we wandered down towards the creek mouth it was a very easy (though smelly) crossing at low tide, so after tea and coco pops for breakfast we set off on our little adventure … the full details of which I had still spared Kim. 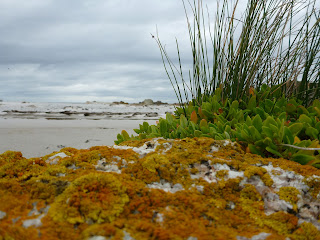 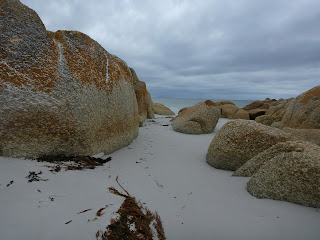 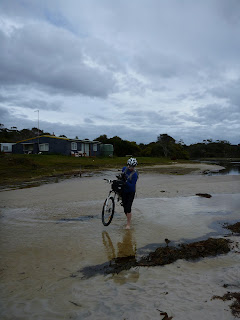 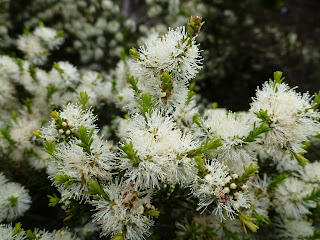 After crossing the creek and hauling our bikes over a short rocky headland, we jumped on and headed up the first beach, on what was pleasingly very easy to cycle hard packed sand. 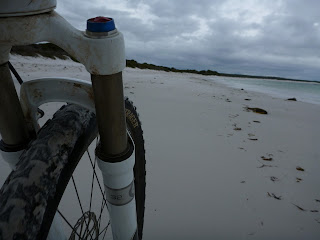 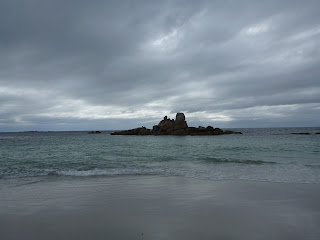 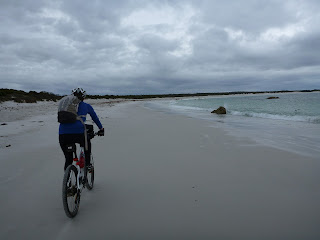 … which lasted all of about 5 minutes until the first big wave came in soaking my bike and sending Kim sprawling in the sand.  Then the sand turned into a quagmire and it quickly came apparent that with the tide still coming in, the idea of cycling another 10kms up the coast wasn’t going to happen.

Luckily for us I have a Plan C (Plan B had been to cycle about 5kms up the coast and cut through the park on what looked like a track on Google Earth, an equally impossible option this day).  Plan C was another possible track, I sort of could see in one version of Google Earth (but not the one on my computer at home), which seemed to also cut across the park but started somewhere about where we were.  Sort of. To be honest I hadn’t paid much attention to it as it was only a Plan C.

Fortunately, a little bit of searching later and voila, just 200 metres from where we came out onto the beach, near what looked like a dry river mouth or sand blowout I found said track and after one last farewell to the beach we headed in land to see what we could see … 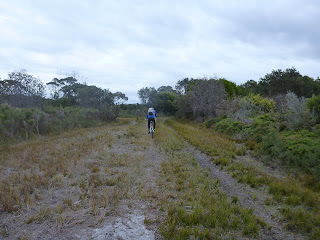 Now I can’t tell you that this was an undiscovered gem of a trail (it turned out to be a firetrail) or that the scenery was breathtaking and the riding superb … because it wasn’t.  But it did still have a feeling of adventure and remoteness about it, the riding was fun (especially the last descent off Bayley’s Hill) and if you took the time to look there were wild-flowers galore, mosses and lichens, abundant wildlife and lovely rock sculptures to enjoy. 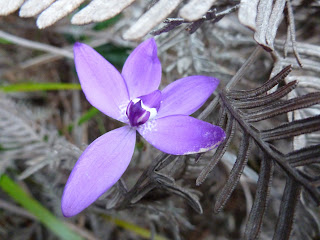 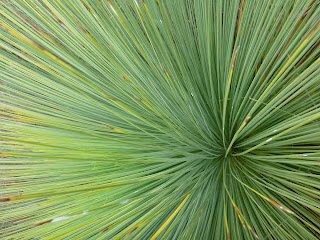 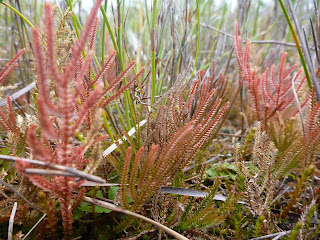 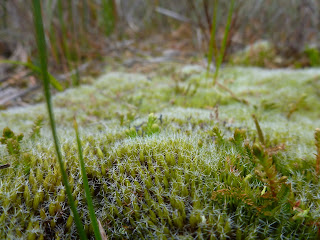 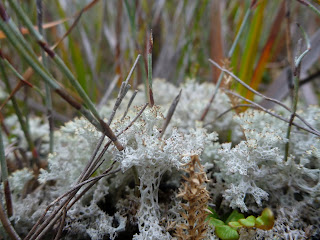 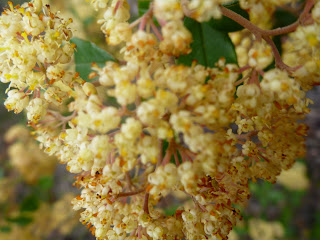 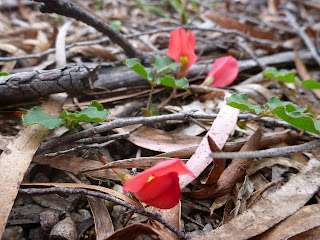 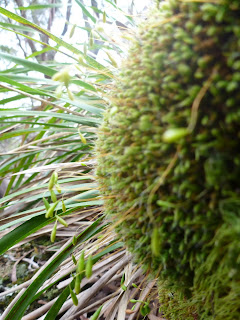 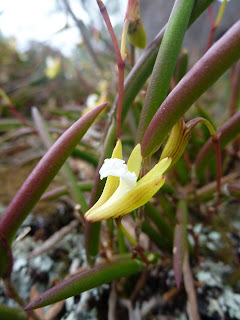 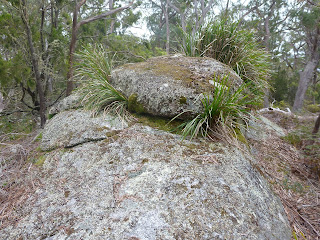 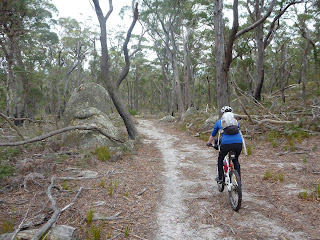 Don’t quote me on the distance, but after about 10kms we dropped out onto the park boundary fire trail, which we turned left onto and followed out onto Ansons Road.  This is where we discovered that we had been a little bit naughty … 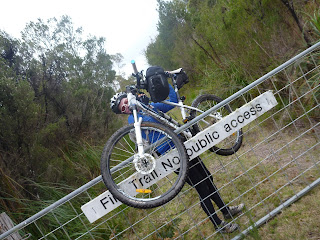 It was a quick ride back to the Eddystone Point turnoff, but we rode past this, and then also past the Ansons Bay turnoff until a further kilometre or so down the road we got to the top of an old 4WD trail … this is definitely the way to get down into Ansons Bay on a mountain bike.  It was a ripper of a descent with lots of washouts and downers to make things fun before dropping you out behind some houses (there is a public throughway if you turn right and head along the track).

We cycled down to the Boat Ramp and said hello to the Pelicans before following a walking path a short way along the shoreline before returning to the road which we followed northwards through the shack town of Ansons Bay waving to all the locals as we went past. 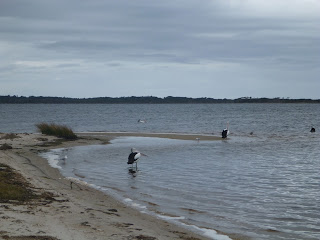 Just as you exit the Northern end of Anson Bay, you pass a closed petrol station/shop on your right and just past here there is a 4WD track heading off to your left … this (according to my map) was a 4WD track back to Eddystone Point.  There was a note at the start of the track about sections of it being closed, but we just had to cross our fingers and hope it wasn’t a section we needed to ride along … we were of course wrong and for the second time that day we found ourselves being slightly naughty …

…. hey we were just 3kms in a direct line from the road we needed to get onto, or the alternative was a 15km backtrack – what would you do?

Turns out that the 4-5kms of closed track (it was a twisty track) was the best riding of the day as we rode around and through deep puddles and through deep rutted tracks. ’twas fun.  Well I thought so.

The was some beautiful flowering going on along the coast … 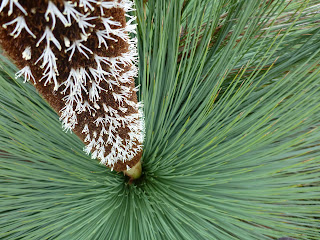 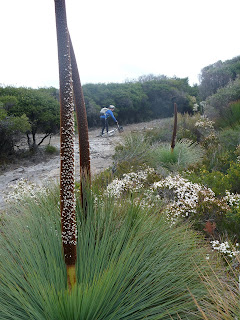 The track we were on dropped us at the junction to our campsite at Deep Creek and the road to Eddystone Lighthouse. It was only 3kms to Eddystone Lighthouse, and although a bit of a dog-leg we couldn’t really resist heading out there for a look around, and as it turned out it was a very quick and easy ride along the road compared to everywhere we’d ridden that day. 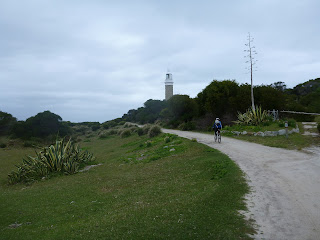 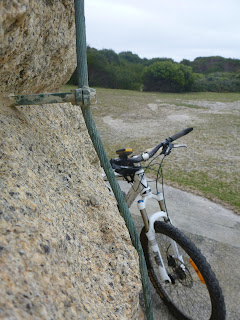 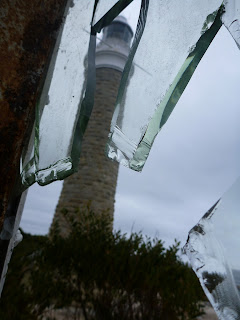 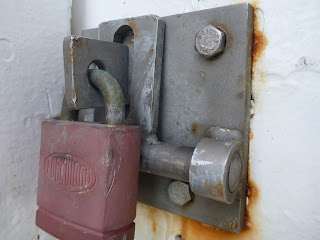 The lighthouse was, unfortunately, locked and a few drops of rain had started to fall so we backtracked to the Deep Creek campsite junction and cycled the final 3kms back to the car where Kim made us a beautiful lunch to rival what they serve at the Bay of Fires Lodge just down the road …

All up, I think our days ride was around 40kms, and on our way back to St Helens, we stopped off about half way along Eddystone Road and explored a further 10kms of random tracks, so all up it was a good day at just over 50kms and 5 or so hours on the bike.

Kim however had been fighting a cold/flu thing all day, so being the wonderful boyfriend I am, instead of camping again I booked us into the Anchor Wheel Motel so Kim could have a hot shower and warm bed and we went out for a nice meal at the local RSL.

I promise that I had no ulterior motive in doing this and that Kim had not threatened to make me fried spam for dinner if we camped, and I also deny that I was in any way influenced by the fact that the last episode of Doctor Who was on TV that night.