Mentally, the second day of a four day bike ride can often be the hardest.

Firstly you’re a bit tired and sore from the first days riding, and then on top of that you’ve got the knowledge that not only do you have to get through today’s ride, but the next day and the day after that as well. 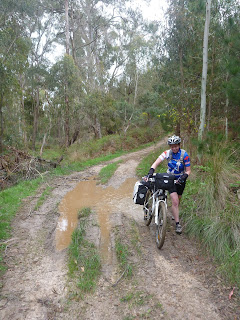 It can all seem a bit daunting and one can find oneself pondering the eternal question of “why am I here?“.  You just have to do it in between stuffing down a hotel breakfast, repacking bike bags and trying to remember (for the third or fourth time) whether you had or hadn’t remembered to unplug your iPod charger from the wall … or am I the only one that always goes back to the hotel room one last time just to check?

With this uncertainty already playing on my mind it didn’t help that after loading up our bikes in the backyard of the hotel we then found that the front gate was locked and we couldn’t get out.  Fortunately, as I stood staring at the front gate fuming at the stupidity of the world’s hotel owners, Kim had the good sense to actually turn around and point out that maybe we could escape this particular trap by pushing our bikes through the car park and out the back gate which was clearly visible (and open) behind us.

Well, while I had to admit that that exit was an option, I still kicked the front gate one more time just to push home my point that I should be able to exit this way as well before sheepishly leaving by the rear exit which rather usefully dropped us right out onto the track itself.

Yep, sometimes you just feel like life is giving you a sign that you’re going the wrong way.  I just wish that sometimes it would be a little less subtle … for example a big white arrow pointing in the other direction as you’re struggling up the first big hill of the day … not subtle. 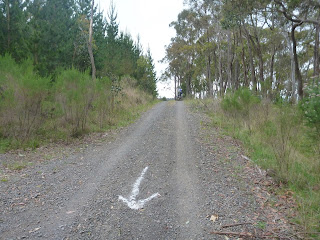 After grabbing lunc from the bakery, we had to retrace our route about two kilometres back to St George’s Lake before setting off around the lake and onto the cycling detour (which is currently an all party detour due to flood damage) up and over what seemed like an unnecessarily steep hill for so early in the day … especially as after a hard little bit of climbing, we then just proceeded to lose all the height we’d gained.

The trail then followed a nice old track around a pine plantation before dropping us out on a road near a big washout where we rather unusefully learned that the section we had just ridden on was closed – I think.  The temporary detour sign was rather confusing (it could have done with a “You are Here” arrow), so we just contined to follow the GPS as it lead us through and around some lovely tracks and eventually out onto Bowens Lane. 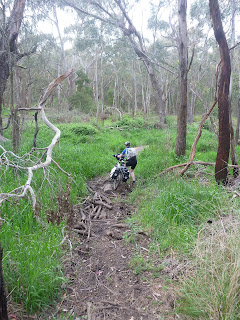 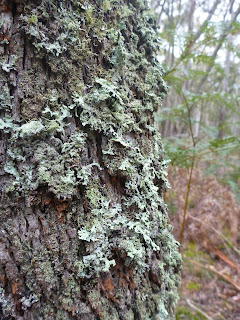 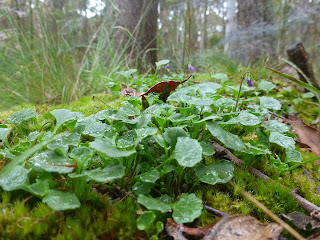 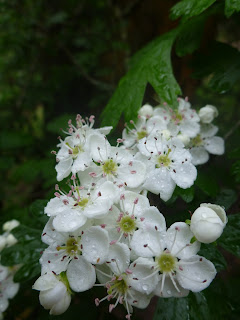 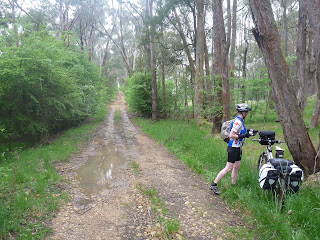 It was nice to get out onto the roads and put in some faster kilometres to warm up as it was a freezing cold day.  I stopped to take some photos of the yellow fields, whilst Kim went and visited her cow friends. 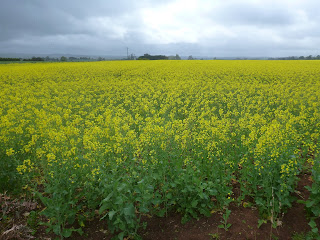 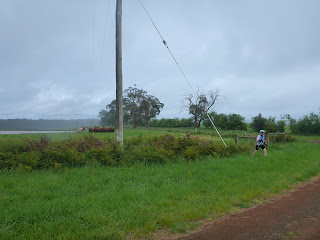 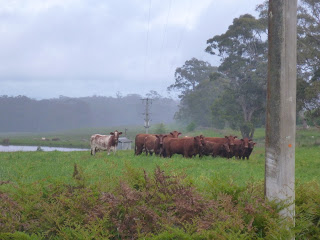 We got very excited as we came into Dean to see a sign indicating food 400 metres down the road, but as we pedalled on debating whether to get a large or a mega-large hot chocolate all we found was this closed hotel … sigh. 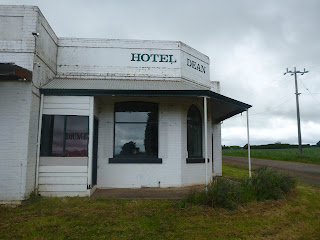 After a rather less satisfying muesli bar we continued along a series of backroads before jumping back onto trails at Slaters Road.  We followed the trail along the spine of the hill for a while before dropping out into what seemed like someone’s backyard (to frame my mindset at this point of time, my first thought was how well this place could do if it sold hot coffees to passing cyclists – I was prepared to start at $10 a cup).  Did I mention it was cold?
After a short section on the road, the trail heads off onto some real singletrack for several kilometres.  It hadn’t been cleared for a while when we came through so there was plenty of fun to be had manouvering over logs and around leaf littered tracks searching for the next marker.  This was my kind of cycling. 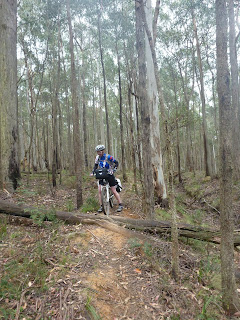 Poor Kim however still had those stupid panniers on (you know – the ones that I didn’t warn her about) which made her technical riding a whole lot more difficult.
All too soon we came out onto more 4WD tracks where I took my first and only spill for the trip losing my front wheel on a slippery, muddy rut with a resulting sidelong plunge into a large puddle.  Fortunatley I managed to get up before Kim could get any photos.  Unfortunately I was now cold, muddy and wet.
Then it started to rain a bit.
After a few kilometres of this we came out at Wombat Station where there was a nice rotunda which made an ideal place for lunch (out of the intermittent drizzle) before we headed off to tackle the rail trail section of the track. 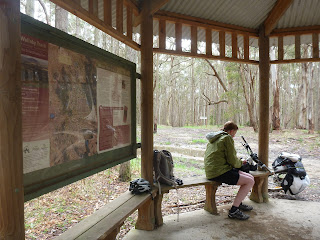 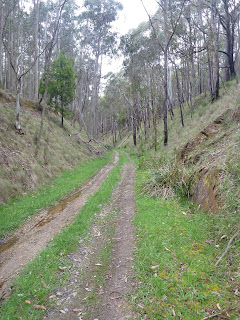 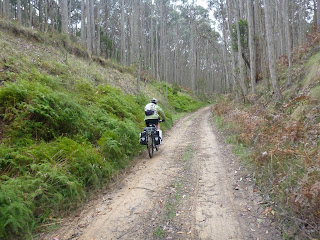 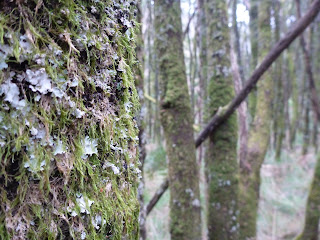 A few more intermittent sections of road and single track dropped us out at Sailors Falls, which is just a house and a name on a map as far as we could see, but it was also where the bike track detours from the walking track and where the (almost) downhill run into Daylesford begins. 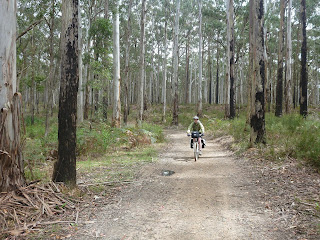 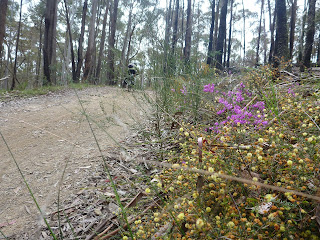 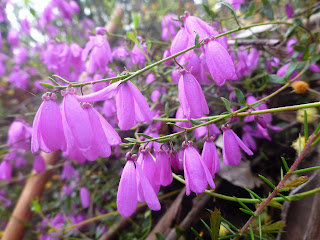 It was fun, fast riding, but then just as we thought we were home, the track threw in a couple of very steep climbs, including one beautifully scenic but ridiculously frustrating section where we had to carry our bikes up and down some steep narrow steps before emerging out behind Lake Daylesford.
Kim had fortunately finally figured out a strategy to get over these technical sections with her bike – that strategy being that after pushing and carrying my bike through these sections, I was to return to push hers up there as well.  Male gallantry is apparently back in style. 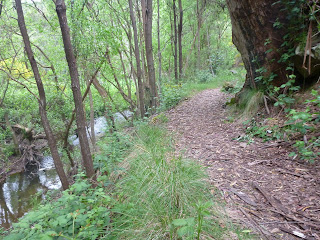 Emerging out on the edges of Lake Daylseford we thought we were home, but (and be warned here) it was all uphill for the last kilometre or so into the centre of town and I don’t know about Kim but I was in granny gear the whole way because I was mentally and physically spent.

It was therefore a real relief to finally pull into our accomodation for the night, which was a beautiful little accomodation house, (I’d call it a B&B but they didn’t do breakfast and a B just doesn’t sound right).

Kim had booked us into a room with a big spa bath which she figured she deserved, and I have to admit that after a hot shower, clean clothes and a good feed I was feeling much better … especially as I sat in bed listening to the rain crashing on the roof as the skies opened again that afternoon.

So that was the day 2 mental hump out of the way – now it was just the physical ones.  On the good news front though, the cold front we’d been enjoying for the last two days was forecast to clear and we had sunny skies and warm days forecast ahead …

=====================
Just in case anyone ever follows this blog, Daylesford does have a combination bike shop/cafe  (just in front of the Coles Supermarket) .  Creswick did not have a bike shop.  We stayed at the Carrington House in Daylesford and I have to give kudos to the owner who didn’t blink at our wet disheveled appearance.