I’d last headed up to St Helen’s back in April where I’d run into the Black Footed Mob and we’d just hung out around the campsite fishing, swimming, toasting marshmallows (and in Marcus’s case tents) and generally having fun.  It was a great trip, but I didn’t get to explore the trails as much as I had wanted to.

This weekend’s trip was planned in part to rectify this. 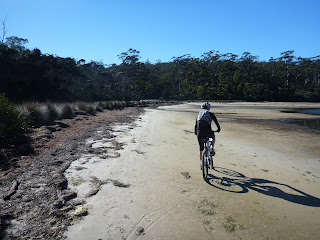 The original plan had been to ride a large circuit, extending a ride Stephan and I had already done along the Fire Road from the The Gardens out to Ansons Bay Road back in April, but this time I’d planned to follow Ansons Bay Road back down to and along Reid’s Road where I’d hoped to cut onto the Round Hill Point Track which I’d then follow back down to the coast before connecting with a series of old trails I’d ridden last time I was here back to the Gardens.

Absolutely none of that happened.

Nope, instead after driving down Anson’s Bay Road and along Reid’s Road on our way back down to St Helens on Saturday I came to the realisation that this would be rather a boring ride (I’d already done the best bits) and with Kim still feeling slightly under the weather I proceeded to make up a new plan, and this plan was based on an incontrovertible fact: when we were here last time, Kim and I had been walking along the beach and three cyclists had ridden past us and continued along the coastal track that runs around the coastline.

Ipso facto there must be great mountain biking around Humbug Point Nature Recreation Area. (They came therefore it is so).

With this proven beyond reasonable doubt, we headed out to the Moulting Bay end of the track, unloaded our bikes and set off to see what we would see (we knew it was going to be awesome, the question was only how awesome would it be?).

After a short section through the bush, the trail dropped out onto a beach before heading back in land over a small foot bridge, and then coming to a junction with the options being the short way to Dora Point or the coastal way.  We decided to head the short way (up and over) based on my hunch that it would be fun riding, and … as we knew it was going to be awesome … it was no surprise to find ourselves riding (OK, with a bit of pushing initially) some gorgeous single track through eucalypt forest. 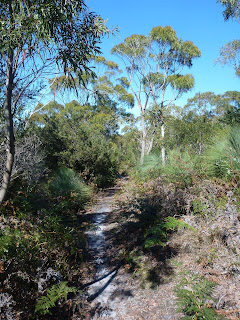 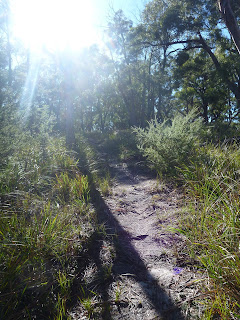 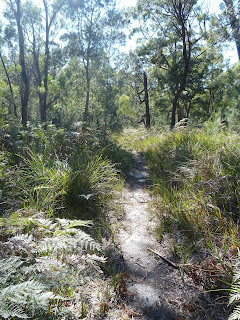 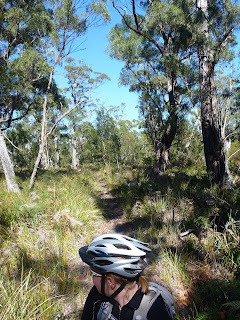 Before we knew it we dropped out at our old campsite at Dora Point, from where we headed along the beach from the day use area and continued on around the coastline all the way (just over 9kms) to Binalong Bay.  Nine kilometres of sweet, blissful, quiet, virtually unused single-track following a gorgeous coastline. 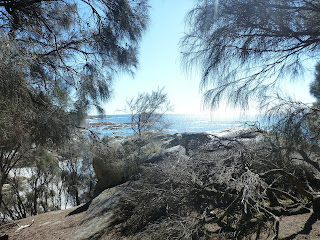 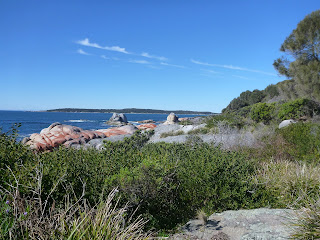 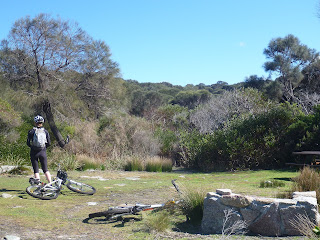 Unfortunately, I’m not sure that we were supposed to be there whichis a real shame as this would be one of the most enjoyable family bike rides I’ve been on in Tasmania.

The track eventually drops out onto a gravel road which we just continued to follow in the same direction we’d been riding as it took us around the coastline until it joined the main bitumen road.  We cycled past a guy running along on a training run in thongs (that kind of catches your attention) and lots of people floating around the shoreline in rafts and plastic kayaks. 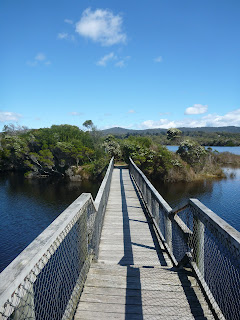 … and then contine along a lovely trail along the lagoon and then along the top of the sand dunes towards the houses on the other side of the lagoon. 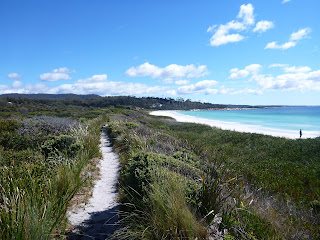 This track dead ends in some peoples backyards, but you can drop down onto the beach, and push your bike along to the second exit from where you come out onto the beach (the first has a wooden chair and is a private exit) which drops you at the end of Lyall Road (it may be possible to carry your bike around the headland, but we didn’t try).

Lyall Road has one of those steep hills on it that you get to the bottom of and think “gulp!“ but then you start pedalling up it and surprise yourself with how quickly you get to the top … which fortuitously is The Gardens Road.

We turned right here, swooped back down the hill and around the road for about 1.7kms until the turn off to Swimcart beach.  Opposite this is another trail which we turned onto that heads up the hill away from the coast.  This is a Management trail (note of warning again: there was a sign here saying management vehicles only, but I figured that technically we’re not a vehicle … so here’s hoping).

A lot of this track was uphill, OK, pretty much all of it was uphill, but it wasn’t a bad uphill, and there were a few descents thrown in and all up I really enjoyed this section which eventually drops you out onto Reid’s Road.

We tried turning right, and then left onto another trail about 50 metres along the road, with the hope of dropping down onto the Binalong Bay Road, but after riding uphill for about a kilometre instead we came to this … 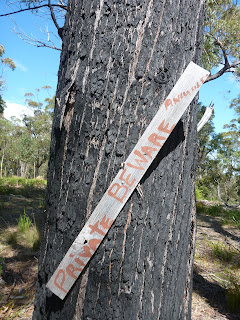 So we turned tail back to Reids Road and proceeded to lose all the height we had gained as we plummeted back down to the Binalong Bay / Gardens Junction (OK, with one small climb) and then back along Binalong Bay and the Moulting Bay road to our car.

All up, it was about a 20km ride and we were out for about 2.5 hours (this isn’t a route for racing, it’s a bushwalk on wheels).

Today’s ride was a beautiful counterpoint to yesterday’s ride, and rounded out a lovely weekend up “around St Helens”.

Now I just have to find out if any of the tracks we were on were actually legal and then I’ll know if I can put any of this onto tassietrails.org.

In the meantime, I might go stare at some more maps and see if I can dream up some new trails somewhere …  I recall hearing somewhere that there’s lots of trails up near lake echo and I’ve never really explore around there …