It started raining here on Friday … or was it Thursday?  I don’t suppose it matters.

I do know for certain that as I drove home after work on Friday the rain turned to sleet and then the sleet turned to snow. I also know I turned off the TV around 8pm and went to bed just so I could lie their listening to the wind and rain buffeting the house.  It was elemental, with wind gusts up to 60km/hr.  It was the sort of night you were glad to be curled up in a nice toasty bed.

The only negative of this wonderful demonstration of natures power was that my plans for the weekend all involved rivers and specifically going down them … and I’m scared of rivers, very scared. 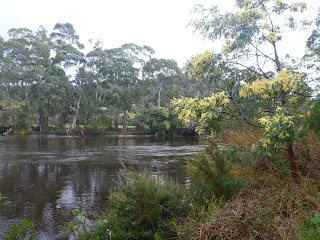 I was however also determined to get back onto bluebird before our planned Xmas adventure, so I still managed to convince myself to get out of bed and drive down to Huonville by 7.30am where I found myself staring out a rather swollen river.  A quick check of the water gauge at the bridge showed the river was running at 2.8m … about 1.5 metres higher than I was hoping, but I didn’t need a river gauge to tell me that the river was high … I could see that myself …

As I was sitting in the car wondering what to do, the skies opened again, and didn’t stop for the next hour.

I spent this time sitting in the car reading motivational blogs, thinking and chatting on the phone … basically just trying to talk myself into being brave.  Surprisingly this finally worked … at least enough to get me to set off towards Ranelagh to drop off my bike at my planned finish point before continuing on up to Judbury to start the paddle.

Half way to Judbury I pulled over to have a look at what I call the mushroom rapid (because it’s near Huon Valley Mushrooms) and what I saw took all the confidence I had slowly built up over the last hour, tossed it in the trash bin and clicked “Empty Trash” for good measure.

The last time I paddled down here I remember getting caught on the rocks before this rapid and losing a lot of plastic off my boat … this time there was a long line of standing waves heading around the corner into the main rapid which I couldn’t see from the road.  I had no idea how much directional steerage I’d have in bluebird to handle those conditions and I had no idea if I had the skill or the boat to get through to the other side.  My panic metre was rising.

I still continued on up to Judbury and walked down to the launch point before I finally made the decision that today wasn’t the day to learn how Bluebird handles in the water … not by myself in any case.

As I tried to figure out what to do, I had an inspiration and chose to download a geocaching app for my phone and went and bagged some geocaches for a while. 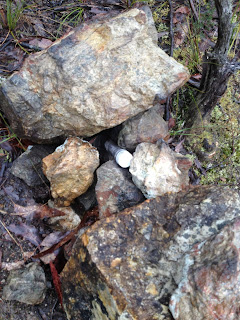 I know that probably sounds random, but as I was standing looking out over the river, I recalled I had once planned a cycle route around the Huon River based on collecting geocaches and that there was a geocache around where I was standing.  I never did that ride as after doing some Geocaching around Mt Wellington I decided that geocaching is not for me and so gave it up.  However recently I’ve been following Jens Voight’s numerous  tweets about geocaching so I thought I’d give it another go … turns out it’s still not for me, so back to the main story …

This diversion did serve a purpose … it distracted my mind enough that I figured out a Plan B … I would paddle from Ranelagh down to Huonville to at least dip my toe in the water and see how bluebird handled.  A brilliant plan.

I therefore went and picked up my bike, drove back down to Huonville, got changed into my paddling gear, loaded bluebird and paddle into a backpack and proceeded to once more cycle to Ranelagh to start the paddle … I think I looked rather dashing cycling down the highway in my thermals, kag and wetsuit shorts … even if I do say so myself … 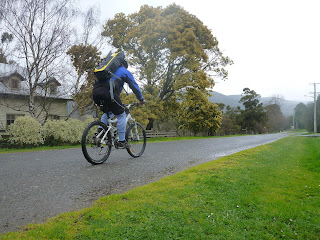 It didn’t take long to get bluebird ready for flight … 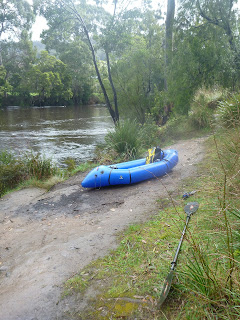 and then with no more excuses we launched … 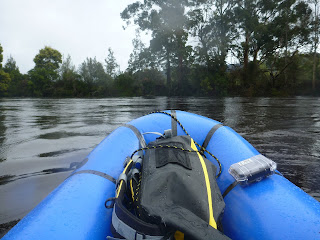 It probably only took 30-40 minutes to get back down to Huonville (including quite a long detour up a little side stream) and I learnt quite a few useful things:
Except for a brief visit from the Huon River Jet Boat, I had the river to myself and it was nice just drifting down the river with the flow watching life go by. 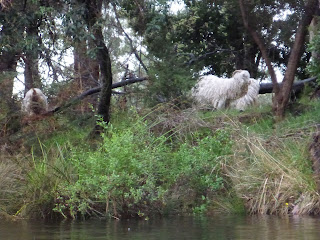 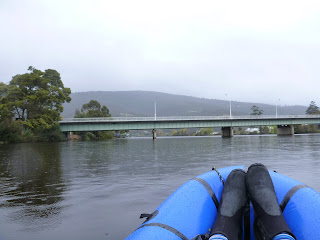 I noticed as I came under the bridge that the river had risen 10 centimeters since I have been there a couple of hours before, so maybe it was a wise move to play it safe today after all. 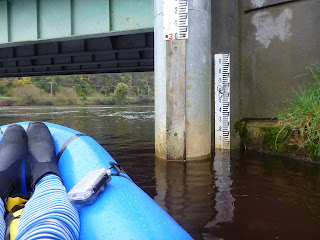 All up, the day wasn’t what I had planned, but at least I dipped my toe in the water … next time I’ll try and go the whole way.