Imagine a sunny weekend spent exploring new trails you didn’t even know existed just one week before, then following this up the next day with a top ten in a white water kayak race and an exploratory ride along Tahune Airwalk’s new MTB trail … oh and watching some guy called Cadel move into a yellow jersey after an amazing time trial during some race in France.  You’d have to call that a good weekend huh?  I certainly do. 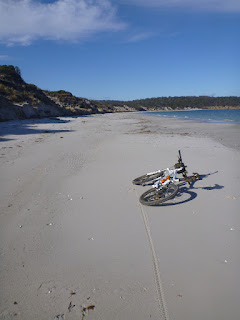 So going back to the beginning, I headed over to Lime Bay State Reserve on the Tasman Peninsuala on Saturday and spent five hours exploring the tracks, hills, beaches, buildings and lagoons of the area.  It was rather a random, haphazard rouote as you can see from the GPS below:
I might of only covered 35km in total, and spent a lot of time chasing dead ends, pushing up hills and being scratched on narrow tracks, but it was oh so worth it, even if my legs were cramped and my back sore as I pulled back into the car at the end of the day.  Check out some of the pics below. 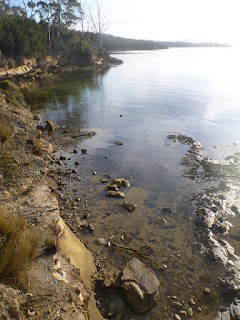 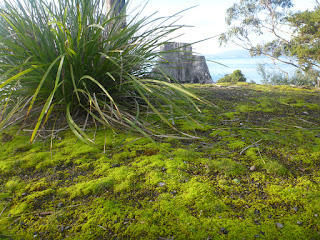 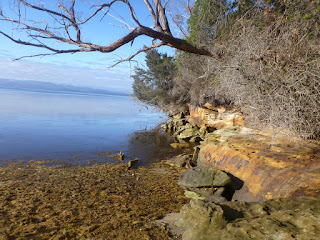 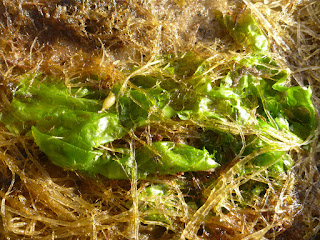 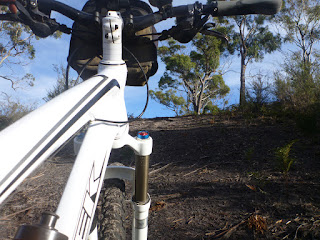 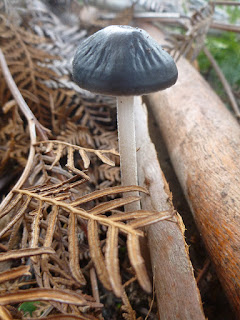 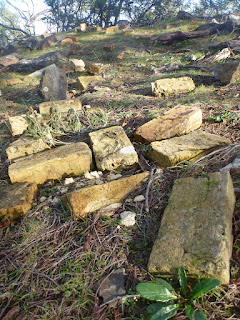 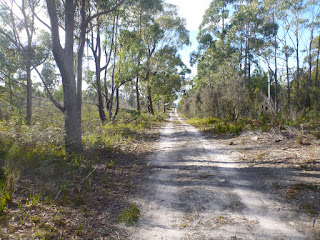 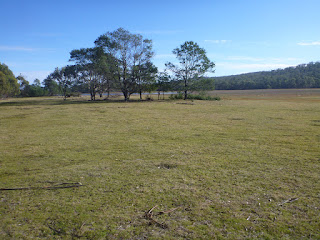 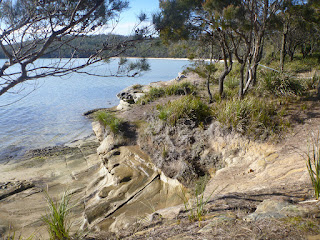 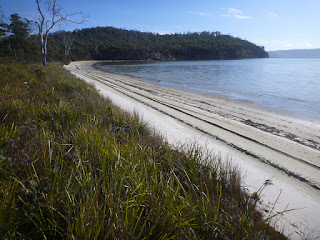 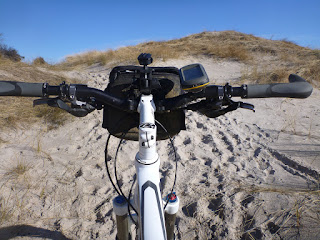 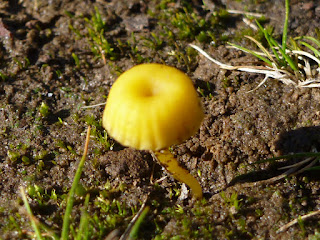 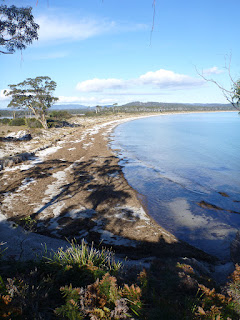 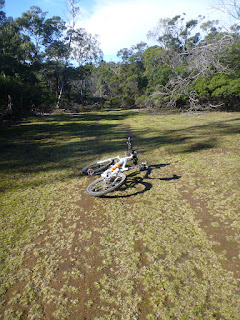 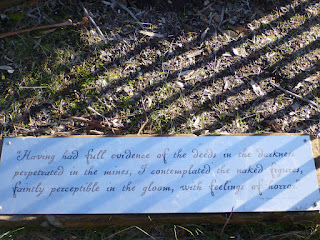 Sunday I got up early and watched the previous nights stage of the Tour De France – the time trial – and all credit to Cadel Evans.  I may not have been a fan of Cadel before this stage, well to be exact I called him a whinging second-rate cyclist who relied on other people to lose, rather than setting out to win, but he was different this Tour and he deserved the win.
That’s my way of saying I was wrong.  I still think his book sucks, and hope he’ll put out a second edition which might actually be readable now he’s won the Tour.
In the meantime, back to Sunday where despite my mis-givings I loaded my kayak onto the car, threw the bike in the back and headed down to Huonville to compete in the fourth Derwent Canoe Club Huon Series Race – a Whitewater race.  Today was a bit strange for me as Kim from work came along for a ride and it was kind of strange after doing my own thing for a year, to have to suddenly think about another person’s objectives and plans for the day (something, unfortunately I didn’t do very well).  There was a thick frost outside when we left, and as we came over Vinces Saddle overlooking the Huon Valley we could see a thick fog settled low over the valley.  It wasn’t inspiring weather for a kayak race, especially given the warnings that the river was currently being fed by snowmelt.
I grabbed a chai latte at Banjos to try and fortify myself, and headed off  to Judbury where I expected to see 30 or 40 paddlers.  There were however just 4 or 5 cars when we pulled in, and I knew most of the guys that were there, and after chatting in the brisk morning air, I somehow forgot my promises that I would only do the event if there were a stack of other inexperienced paddlers like myself (which there weren’t) and instead found myself unloading the boat and getting ready to race.  It wasn’t until I was sitting out in the main current, with my fingers freezing in my gloves, that it occured to me to ask myself how I had got there, and by then it was too late.

As it turned out there were ten of us competing (hence my top ten finish).  I actually came second last, but it was a brilliant paddle down.  It really is a wonderful river, and I only took the wrong line in the rapids once, OK twice, but I’m not admitteding to anymore than that because there are no witnesses to prove it so twice it is, though I did leave an awful lot of blue plastic boat on the rocks and stumps on the shingle rapids heading down that river.

I really wish I had taken my camera with me and snapped off a few pictures, but all I’ve got is these few pictures of my arrival under the Huon Bridge. 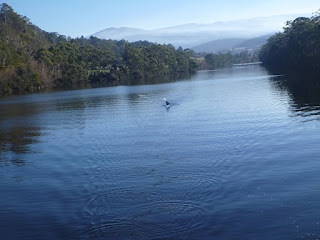 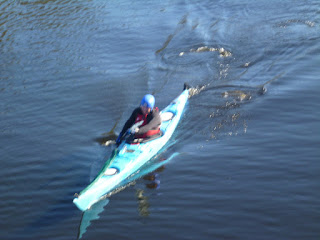 By the time I got to Huonville, it had gone noon and poor Kim had basically got up at some ridiculous hour to stand around all morning waiting for me to go paddling and providing a shuttle service for my car, so feeling a bit guilty, I quickly loaded up the boat and we took off towards Tahune Airwalk.
After a quick lunch (well quick for me), we unloaded the bikes and set off on the new bike track.  The track is actually still ‘under construction’ in that the signs are still printed on A4 pieces of paper and this is my excuse for why we missed one of the turns on the way back and just headed all the way back along the road.

The track itself was pretty good fun.  It is easy to intermediate single track for about 3kms before coming out at Picton Bridge and then heading back along the road for most of the way back.  There was plenty of mud slippery undulatons, all of which were mainly fun, and Kim wasn’t a sit back and photograpth the mosses, spot the platypuses type of rider.  She was more a Jan Ulrich type of rider – big gear, and ride, ride, ride.  So not many pictures, but I did have my video cam on and might try and edit that down later on.

It’s not a ride I’d head down there specificially to do, being only 3km of single track and 3km of road riding, but I’d definitely add it to a day trip if I were down there for other reasons, or add it onto other trails.  I plan on getting it up on tassietrails.org as soon as I can. 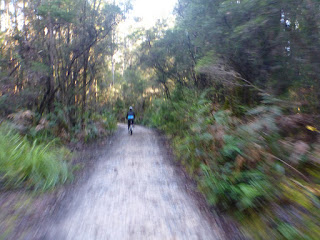 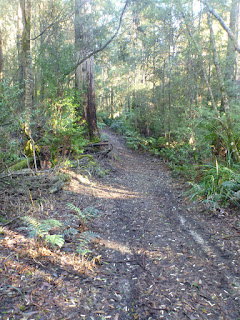 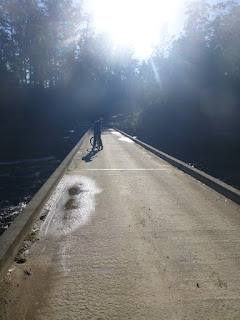 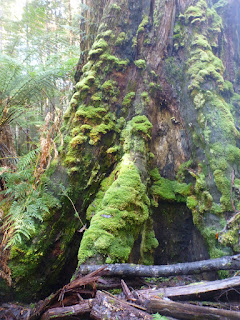 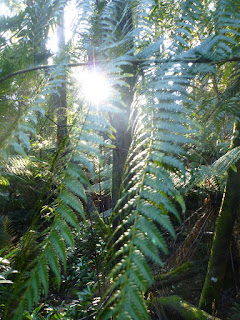 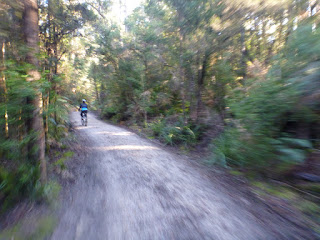 After the ride, Ian from the Tahune centre came over and had a chat about the trail, set me right to where we’d gone wrong, and gave us a guided tour of the new accommodation.  He was a brief bright light in the usual drab world that they call Tasmanian hospitality.
So that was my weekend, not bad, not bad at all.﻿