Yep, we went back to Movie World again today – the third time in four days, but this time it was adults only.  Well us two anyway … 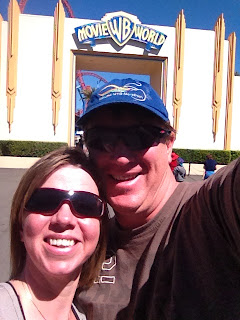 We left the monsters with my sister for the morning, and headed back so we could finnaaalllyyy go and cram some rides in after three days of watching the monsters bouncing up and down on merry go rounds and half sized dodgem cars (not that I begrudge them this, but after spending three days watching other people on all these adult rides… well my selfish gene needed some attention and I think Kim’s did too).

We got straight onto the Batman ride as it looked the coolest … but after being jettisoned god knows how high into the air, and then plummeted back down to the ground, we both basically looked at each other and agreed it was lame.  We had three days of adrenalin deficit to catch up on and that just wasn’t going to do it.

Next we tried the Green Lantern Ride … now this was cooler, but truth be told, it was fun … but it wasn’t the gut clenching, “oh my god we’re going to die” experience we were looking for.  Time was ticking and we moved on …

Superman the ride was next (by the by – have you ever thought about what a terrible job a theme park planner must have … it comes to that annual planning session where they get to decide which movie and ride to add to their theme park, and so they spend many hours, even days, doing focus groups and think tank sessions and what do they come up with … another roller coaster painted a different colour … what an unsatisfying job).

I digress, we jumped on the Superman ride (this one was coloured red), and I do recall making the observation as my body decelerated from 4.2 G’s to -1.3G’s that “This is what I’m talking about.”.  It sounded very cool in my head at the time, totally lame now, and perhaps I should just delete this because if I don’t include it in this blog no one else will know because no one else would have heard it above Kim’s comment which went something along the lines of “AAAAAHHHHHEEEEHHHHHHH” … except it was louder and longer than that.

I loved the Superman ride.  Next time I’ll wear ear plugs though.

On a final impulse (and because the queues were pretty short) we decided to go and try one last ride called the “Arkham Asylum”.  We had no idea what this ride was about, but hey, we were here, and so was it, and it would be good to do a ride which was something other than a roller coaster.

Turns out it’s a roller coaster – a black one.

Despite this, I loved this ride for three reasons … (1) it was pretty awesome fun (2) although it was a roller coaster, it was an upside down roller coaster (I bet the planners got super excited about getting that one through) and (3) it was broken.

How cool is that?  I know: Supercool right?  and how lucky am I – I got to sit in one of the seats that wasn’t locking properly.  Originally it was Kim’s seat, but for some reason she was happy to give it to me, and I wasn’t going to say no to that offer.  She’s so nice.

The only real downside was that we got stuck getting on and off the roller coaster for about half an hour as they tried to figure out what was wrong with it, but I could so forgive them for that due to the extra excitement factor of knowing that things could go wrong, as I was whizzing upside down and around and around at stupidly fast speeds.

The only thing that surprised me is that whereas on the previous three rides I’d turned to Kim just before we headed off and said “see you on the other side”, this time I was a bit surprised to just hear myself say “see ya” as we set off.  Did my subconscious know something I didn’t know?

Suffice to say, all that the break-down gave me was an extra excitement factor, not death, so all was good.

and that was our brief holiday … I’m now sitting back home in Tasmania with no plans of getting back on a plane anytime soon … well, for a month or two anyway.

Time to go explore some more of Tassie’s Trails for a while.