I guess just for completeness sake I should also mention that it went off at 6.30am and 6.40am … my ambition to catch the first ferry of the day over to Vancouver Island was well and truly trumped by my deep and abiding need to catch up on my sleep.

I eventually got out of bed about 7.20ish with a determination to have a quick shower, grab a cup of coffee and be out of there in under 15 minutes so as to catch the second ferry of the day at 8am.

At exactly 8:30am I finally left my room having gotten slightly distracted watching Star Trek and doing the previous blog. In my defence I did have a shower and coffee in under 15 minutes … I then just decided I was on holiday, so why rush.

However, fortune was on my side today. Firstly I found the other way into the hotel from the highway… the one that would have saved me about 30 minutes in yesterday’s traffic jam. Good to know for next time I guess.

Then I drove down to the ferry terminal with plans to catch the 10am ferry.

Now they have these really useful road signs on the way down to the ferries which not only show you the time of the next few ferries, but also how full they are … and a few kilometres out from the terminal I went under a sign that told me that the 9am ferry was only 72% full. I looked at my car clock … 8:52am … hmmm. I pressed the accelerator just a little harder (there seems to be a speed limit + 15km rule over here as no one travels anywhere near the speed limit and so all I was doing was catching up with everyone else). I pulled up to the ferry booths with about 4 minutes to spare, handed over my $67 and drove straight onto the ferry just as they shut the doors. Sweet.

Now, I had been told by a friend to go to the city of Victoria as he said it was very beautiful, so I had jumped on the southbound ferry in order to do this, and I was so glad that I did … not because of Victoria – I drove into the old precinct, did a few blockies, remembered that I’m not really that interested in cities, so pulled over, set my GPS for Tofino some 300+ kms away and drove out again – No, I was thankful because the ferry trip across was just wonderful. 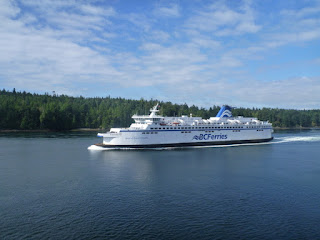 It’s a bit hard to explain, but like so many of my generation I’ve grown up with television and cinema defining my image of wilderness as pine covered banks plunging down into narrow channels in Canada and Alaska, and for good or for bad, to actually be on a ferry passing through one of these gorgeous, picture perfect, passages … well, it was actually like entering a dream. I could have come home happy after just that one ferry trip.

But it got better. After my little detour into Victoria, I started travelling north and then west to Tofino and over the course of the next six hours passed through some of the most beautiful country on this Earth. My camera pictures could not begin to do this area justice (especially as I was taking them on narrow corners on the wrong side of the road). 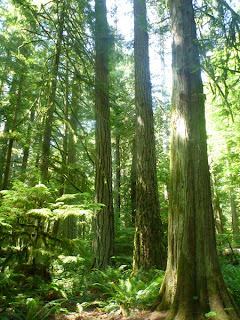 I stopped at one of the few remaining remnant old Growth Western Cedar patches on the island and spent an hour or so just wandering around absorbing the area. I even got to see my first squirrel of the trip munching on a log. As you know for me small things make me happy, and a squirrel is definitely a small thing. 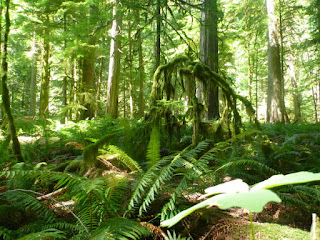 I was particularly amused to return to the car park and overhear someone remark to their travelling companion “I don’t want to do a walk all the way to the lake” referring to the short 1km loop I had just walked “I just want to see the biggest tree”. This was when I discovered that one particular tree on the other side of the road had been named the largest tree … I wandered over there and sure enough the masses were all congregated around this one tree (which was really not that much bigger than all the rest) taking photos of each other. Sigh, stupid people and their big things – when will they ever learn.

I continued onto Tofino, which is as far west as you can go on the island, stopping at a visitor’s centre about 35kms before the town to verify that there would be accommodation there. The girl at the visitors centre assured me there was and that I should stop at the next visitors centre just outside of the town and they would help me book a room.

Pleased by the way my luck was holding out, I did just this, only to arrive at the visitors centre to find that while, yes, there were rooms available they all required me to book in a minimum two nights, or if this wasn’t an option, there was a hotel which had a room for $253 plus taxes.

I declined their kind offer and drove on into town searching desperately for somewhere to stay. I almost got a campsite just outside of town, but another couple in front of me got the last one, so I turned around (it was around 7.30pm by this stage) resigned to having to drive back to the next town … 130kms back down the road.

However, this was to be a good day, not a bad one. About 15kms out of town I saw a sign to a golf course and campground. Somewhat bemused by this combination, I did a U turn and went and tried my luck … and it was red hot. There had been a bear sighting or something there (there were warning signs everywhere) so only the fortified RV campers remained … all of the campers had fled … leaving me my pick of sites for just $35 plus taxes (one thing John Howard did right was make businesses list all prices GST inclusive in Australia).

So, assuming I don’t meet Mr Bear tonight (in which case this will never get posted) I’ve just had the most wonderful day ever.

Yep, this is a holiday.