So here’s something that’s not very funny at a campsite with bear warnings … waking up in a tent and hearing something very large moving around outside at night.  My solution, admittedly after a momentary panic, was to roll back over and go to sleep.  It seemed to do the trick as I woke up in the morning alive and well. 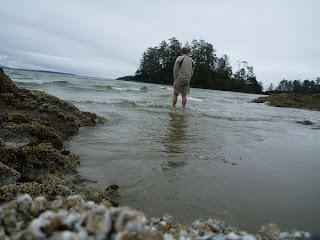 The beautiful blue skies of the day before had gone, and today was overcast and my tent was wet when I took it down.

I therefore decided to retire to a late breakfast at the golf club where I fought with their internet connection for nearly an hour to get the last post out, before finally deciding to go and greet the day around mid morning.

I tootled off down to the nearby national park which basically straddles the coast for around 20kms or so, and once there, I looked to see where everyone else was, and then wandered off in the opposite direction.  I was looking for nature, not company, today. 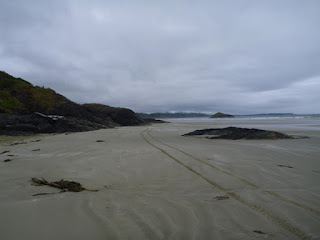 This didn’t really work out as it turned out there were people everywhere, but ignoring them, I have to say that my love affair with Vancouver Island is just deepening.   The shoreline here was just one continuous long, flat, beach littered with debris from storms whose fury I couldn’t comprehend (at one point I was walking by a rock that was about 5 metres tall, and it had huge logs tossed up on top of it).  The forests come right down to the shore, standing there like bulwarks to the sea, and all along the coast there are these headlands and islands with bases of hard, sharp rock, yet they are all covered in dense forest.  It was just gorgeous, and I couldn’t help but see myself coming back and cycling and paddling these shores in years to come … 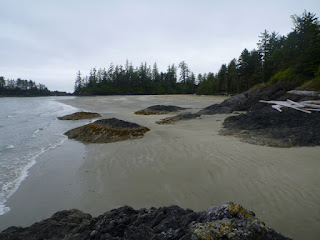 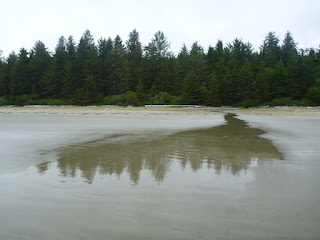 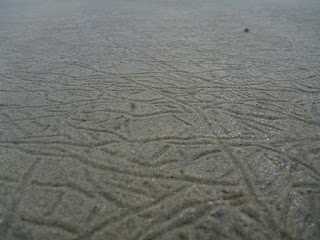 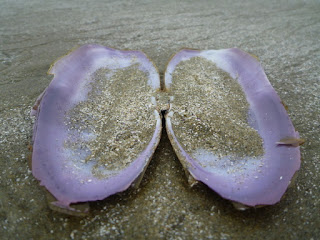 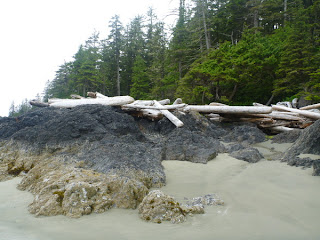 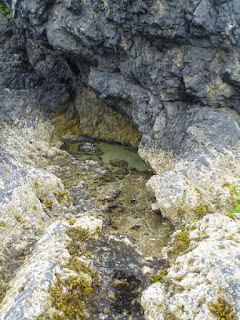 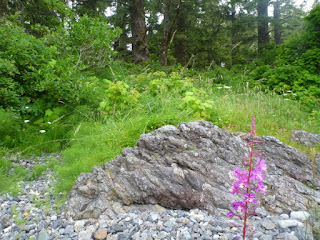 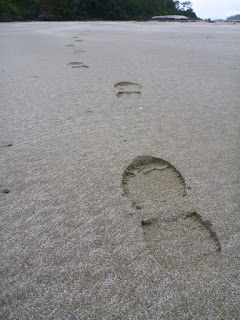 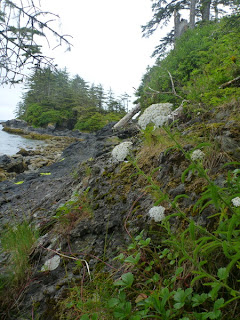 Unfortunately, the combination of beauty and my accidentally setting my camera time one hour too slow meant that I did stay too long … and on returning to my car at what I thought was about 11.30am, found it was actually 12.30am.  Frick.  I had a ferry to catch 250kms away, and I now had an hour less to get there than I thought.  Did I mention frick.

I set off back to the east side of the island with all due haste, adopting the Canadian driving habit of completely ignoring the speed limit and just driving at the pace that everyone else does (I will be bankrupt if there are actually speed cameras over here).

Anyway, in this time of panic and recalculation of route times in my head to see if I would make it to Campbell River in time for the ferry to Quadra Island, I of course got about half way back across the island (it’s about 150km across) when GyPSy kindly tells me to turn left up a frickin’ logging track.  Frick, frick, frick, frick, frick.  She’s as useless over here as she is back in Australia and I think that GyPSy may be getting dropped into the Pacific Ocean on my way back home … if I can figure out how to open a plane window mid-flight.

Anyway, despite her many attempts to turn me around and send me up that dead end logging track, I steadfastly ignored her route suggestions and still managed to make it to Campbell River at just after 4pm … 30 minutes early for my ferry.  Somewhat relieved, I drove into the terminal, paid for my ticket and then just as I was about to drive forward the lovely lady in the tool booth told me to “Drive into Lane 8, you’ll be on the 5.35pm ferry as the 4.30 is full.”  How many times can you say frick in one blog before it becomes repetitious? 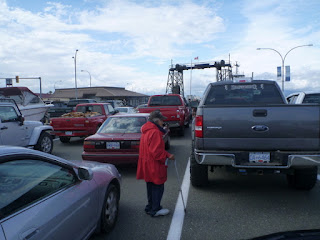 Turns out that after all that I was 3 minutes and 5 cars too late to make the 4.30pm ferry.  Still that then gave me an hour and a half to re-arrange my accommodation and kayak group arrival times, all of which proved to be unnecessary as I still managed to get over in time for the 6pm kayak tour briefing anyway (I had 3 whole minutes to spare).  Then again, I kind of wish I’d missed the briefing in the end because the news is that they haven’t seen any Orcas in the last few trips … something you think you would mention to someone booking an Orca tour one week ago from half way around the world, or am I just too honest?

So tonight I’m staying in a very swish B&B in the ‘sunset room’ which overlooks the water and mountains on mainland British Columbia.  I like my room … not only does it have gorgeous views, it also has its own spa and walk in closet with fresh clean dressing gowns … this is so much better than lying in a tent … something I will be doing for the next three nights as I paddle around not seeing any Orcas …