Why do my holidays always start with an alarm going of at 4.15am in the morning?

That can’t be the right way to start a holiday.

In fact when I think about it, not much of what I’ve done so far could be referred to as either fun or relaxing.

My flight to Los Angeles got caught up in a power outage at Melbourne Airport (they couldn’t disconnect the plane from the terminal) so we ended up sitting on the tarmac for over an hour before we finally managed to taxi out to start our flight … only to then be told we’d left a passenger behind and had to go back to the terminal (they’d lost the passenger maniest in the power outage as well)  … we were sitting in the plane for nearly two hours before we even left the ground.  Just what you want at the start of a sardine filled14 hour flight.  I had also been given a seat right at the very back of the plane with a heater or something right where my right foot should go, so I couldn’t stretch my legs out, plus I had an oven at my feet for 14 hours.  Yay.

Six movies and very little sleep after that we arrived at Los Angeles where I transfered over to a WestJet flight for the final leg to Vancouver.

I like WestJet.  Firstly they let people take dogs onboard (well little dogs in these special dog bags that fit under the seats) so we had two howling chihauhaus sitting right under my seat as we took off.  After 24 hours without sleep I was loving that.

They put cheesy Chrismas Cracker quality jokes on their TV screens (they had to put something there as they don’t get Canadian Satellite signals over US airspace so can’t transmit TV).

Jokes like “What does a spider do on a computer?” ….  “They create a web.”.  I know, hilarious the first time, but after it’s cycled around for the fifth or sixth time it loses its polish.

Whtat I love the most about WestJet though was that once we did get TV shows …. what did they play?   Well you had the choice of  “It’s a Wipeout” (again on repeat – I saw the same episode two and a a half times) or “Mayday” … which is the Canadian equivalent of “Aircrash Investigations“.  Yep, sitting on an aircraft watching other planes crash out of the sky … now that’s my idea of entertainment.  Howl chihauhau howl.

I finally touched the ground in Vancouver (alive) got out of customs only to find the “ford focus hatchback” I’d booked was “representative only of the type of vehicle I would get”, and they’d put me in a two door fiat instead which was so small I couldn’t get a backpack in it, never mind my bicycle (I really don’t recommend rentalcars.com) but fortunately the lady at the thrifty counter was really nice and let me go out and choose another car I could fit my bike in for only an extra $10 a day which wasn’t too bad.

I drove tentatively out into the traffic extremely nervous in my now ‘big car’ driving on the wrong side of the road.

Then, just as I pulled out onto the three lane highway … my boot opened up.

Of all the scenarios I had envisaged going wrong driving over here, my boot opening up on a three lane highway had not been one of them.  I had one of those time stops flashback moments when I recalled that when I’d jumped in the car I had pressed the wrong button on the remote … not connecting that what I had done was unlock the boot … which of course meant I should have closed it.  I obviously hadn’t.

I had no choice but to stop and run out and close it (in my panic at this point, I did so without putting the handbrake on, and yes the car did start rolling forward).  It was a scene from my own private hell … or an AAMI advert.  Fortunately, it did’t end in disaster, just high stress levels and embarrassment.

Just to finish off my day, GyPSy (who had come across from Australia with me) sent me down a few wrong turns, and when returning to the highway, just as I came up to my first turn left over three lanes of traffic into a dual lane highway intersection I hear a fricking siren coming towards me … a fire engine.

I’m not good when I have to do lots of quick decisions in a time of uncertainty … in fact it’s my equivalent of hell, so there I was in peak hour taffiic, no sleep for 27 hours, lanes clogged, fire engine coming from my right, stressed from my previous boot experience, half way across a six lane intersection with the light turning red … Yay.

I blanked out the next 30 seconds of that point in my life, but somehow I got across the intersection and back onto the highway.  It was only 8 more kms to my hotel and it was all on a highway.  Thank God.

It took me over an hour to get there.  EIGHT FRICKING KILOMETRES!.  Actually, it only took me 5 or so minutes to get the first 7.4kms.  I could see the hotel, but there had been an accident in a nearby tunnel and traffic had gridlocked.  I had to get across an overpass and then across three lanes of gridlocked traffic and yep, it took over an hour to do that.

I was so glad to get into my room, have a meal and cral into bed … 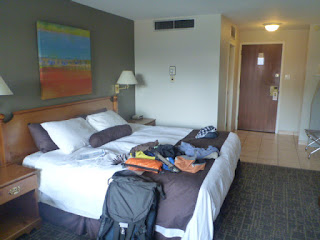 Yep, if this is a holiday … Then I can’t wait to get back to m nice relaxing job.