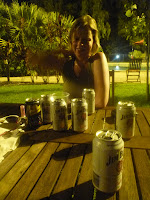 After a very pleasant dinner, and probably a few too many drinks to celebrate Kim’s Birthday (which at some point she decided would now be officially extended to her ‘Birthweek’)  we ended the day sitting beside the pool at the Katherine Gorge Campground watching two kookaburras hunt insects in the pool lights whilst hundreds of flying foxes launched from the surrounding trees into the night.

However, with an(other) early morning breakfast cruise the next day, we eventually called it a night.

Well I did, Kim went off all excited to try and find a local carpet snake called ‘Esmerelda’ which hunted in the nearby toilets at night.  Hey, it’s her birthday, she can do what she wants too…

Happy b’day Kimberlily. (but note the use of the word b’day not b’week).