Skip to content
Something had to go wrong with the dirtydozen.com.au, and for me it happened at Bright. But it’s probably not what you think.  The problem with the River Runs Through It track at Bright is that, well, it doesn’t exist.
By that I mean the track is there, but it’s not a signed track and the dirty dozen website has taken some liberties in how they’ve described the trail.  Rather than describing a track starting behind the brewery, it might have been a bit more honest to say something like “if you can find a local rider to guide you through, you can tie together a wide network of unsigned single track winding through the hills above the town and enjoy some raw, uncultured mountain biking”.  If you can’t find that local rider … good luck.
I arrived at Bright in the afternoon, but was soon taken by a lovely shady spot beside the river where I settled in with a late lunch (seriously go to the local charcoal chicken and try their bean salad – it’s divine) and read my book, shot off a few emails and watched people floating down the rapids on all sorts of floating devices until before I knew it … oops … it was too late to go for a ride, so I headed for my motel instead.
Slightly (but not much) more motivated the next morning, I went to the local bike store to ask about the track as I hadn’t been able to find its start the day before.  He’d never heard of it, but in the end we struck a deal whereby I purchased a $10 mountain biking guide of the Bright area (which had virtually no single track in it and was of no use to me) and in turn he gave me for free the piece of paper which I actually wanted which was an outdated A4 mud map of the single track in the area.
Armed with said map, I headed up Morses creek by heading under the bridge on the brewery side of river, then cycling through several caravan parks before eventually having to exit out onto the road and riding along until I hit a road where I could see a bridge across the river again.  I headed down to the river here and found a sign pointing to Pioneer Park.  I was finally on some single track. 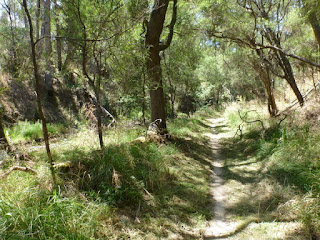 I followed this single track up the creek and there appeared to be tracks on both sides, so I crossed at the second bridge (at Pioneer Park) and tried the track on the other side which eventually emerged back out onto the road.  From here I had a grand old time getting lost.  I crossed the road, headed down some trail, then back onto some gravel roads where I saw bike tire tracks heading into a pine plantation, so I followed this until I came to a sign up Wolonga Creek or something and figured “why not?” and continued blissfully onward. 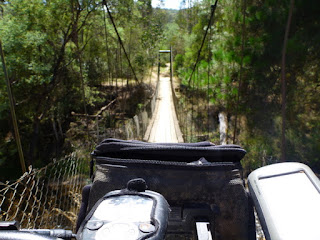 After crossing another road I came across a bushwalker, said hello and upon his polite enquiry as to my wellbeing, I told him that I was having a great day but was a little lost.  Somewhat concerned he asked me where I was trying to go, to which I truthfully replied that I didn’t know.  He sagely looked at me and assured me that if I didn’t know where I was going, then I couldn’t be lost and bid me a good day and continued on his way.  It was a kind of surreal encounter, especially as he provided this assurance in this wonderful Irish lilt.  However I couldn’t fault his logic, so assured that I was in fact going the way I was supposed to be going I continued onwards.  This was my type of riding. 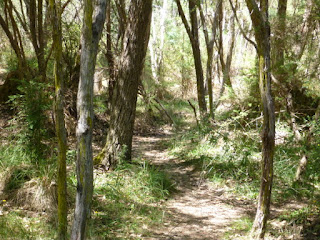 The track soon came to a bridge, and after a bit of a false start continuing up the river on the other side, I found the track basically headed back down the river in the opposite direction following gravel roads and then single track.  I had finally figured out where I was on the mud map and it was proving very useful 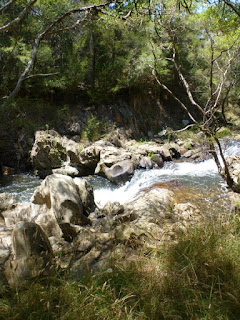 Soon I was having a jolly good time coming to random intersections and glancing vaguely at my map, deciding that X must be the way and off I went.  Actually it was slightly more thought out than that – I kind of followed the mud map initially, until I saw a trail heading off into the pine plantations which I promptly followed and then there were just tracks going everywhere and none of them matched what was on my map, so I just rode.  I went left, then right, then found I was back where I started from, so I went another way and basically I just kept doing this until somewhat miraculously I pretty much popped out behind the town, just as the dirty dozen trail notes predicted I would, followed the track around behind the town, just as it said I should, and soon enough found my way back into town and back to my car.  Just as it kind of said I would. 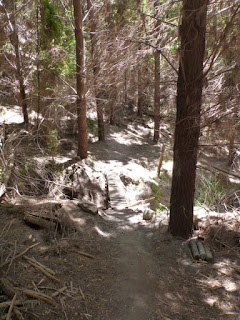 I travelled a few more kilometers than the website predicted and trust me there’s a whole world of tracks out there I didn’t get to explore.  The riding was raw, the tracks uncultured compared to everywhere else I had ridden, and there wasn’t a sign in sight.  I was scratched by blackberries and stung by thistles as I explored the various trails, and a few times found myself hurtling along obviously abandoned trails which had eroded away.
I think for many this wouldn’t be a highlight of the trip, and without my mud map and GPS I would never have enjoyed it as much, but after the previous days rides around well signed and groomed trails, this ride hit the sweet spot for me.
I may not really know where I was, or where I went, but as the leprechaun said, If you’re not going somewhere, you can’t be lost.
Wander on.
As for me it’s time for me to head up to Albany for a bit of a break.