Skip to content
If “You Yangs” is in the Macquarie dictionary, I bet it is defined something like:
You Yangs (Aus): (1) heaven, nirvana, bliss; (2) a park containing a network of mountain bike trails 45 minutes south-west of Melbourne 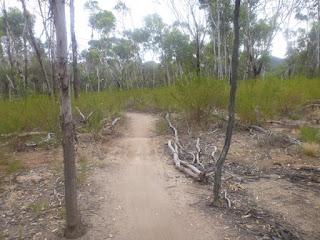 I can’t believe I was almost going to give these trails a miss after a heavy two weeks of active relaxation, and I’ll take up a religion if you just point me to whichever god sent me down south today to enjoy them.

These trails are in a small park about 2/3rds the way down to Geelong from Melbourne and I, predictably, went to the wrong end of the park.  I meant to go to what are called “the stockyards” but not really knowing where I was going, I just followed the signs to the entrance and ended up at the plantation end of the park.

Completely oblivious to this navigational error I unloaded the bike next to a couple of guys who were loading their bikes back onto their cars after a ride.  I got chatting to them about where to go, and they vaguely told me that if I wanted flat riding to head off behind the toilets, if I wanted hills then I was to go over there, at which point they vaguely pointed in the same direction they had just pointed to when pointing to the toilets, so I thanked them, saddled up and headed to the flat/hilly trails that were mysteriously together behind the toilets to see what I would see.
I did find the toilets, and even better found two trails heading off behind the toilets.  As I was trying to download the maps for the park on my phone and figure out which one of these tracks to take and why none of what I had seen matched what was on my map (which was of course the map of the stockyards which is not where I was) another guy turned up on his bike so I just asked him instead.
He told me that it was basically a big loop, you could go either way, but most go anti-clockwise because that direction gave you the best run at the jumps.  He then told me to just follow the signs for route 17 then 16 then 15 … and I’d end up doing a big loop … or something like that.
That was good enough for me, I had a track, I had a direction – what could go wrong? 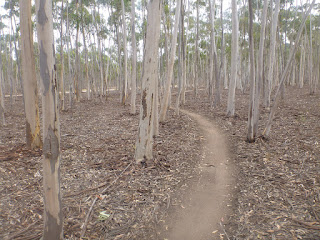 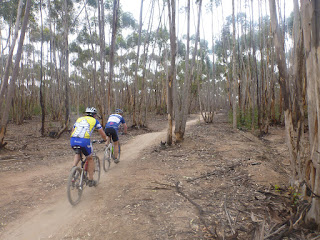 I happily set off into the bush, and found myself using gears I hadn’t used since leaving Tassie … I was cranking over in top gear, ripping into berms and flowing down big wide swerving corners like I have never experienced.  I was going …. fast.  I was having fun.  Lots of fun.
Track 17 (lumberjack track) soon ended at another carpark, but as promised there was track 16 right in front of me.  I didn’t see any need to stop, so just kept on going.  Heck, this track was so fast that it was even a pain to stop to take pictures.  Fortunately track 16 (plantation trail) started heading slightly (very, very, very slightly) uphill which took me down a notch or two in speed and I took a bit of breather at the junction with track 15 (chainsaw) track.
I should point out for posterity that it was at about this point that it finally dawned on me that as I was riding the “plantation trail” through plantations, I was probably at the plantation side of the park, not the stockyards side.  Clever aren’t I. 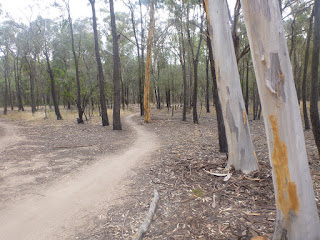 What I didn’t know was that I was pretty much at the top (the total climb is only 45metres) and I was about to start heading down.  The next few kilometers were just a blur of the sweetest corners, fast jumps (including an optional jump park which is a must do) as well as a few minor technical obstacles such as plank challenges, bridges and dips.  I did them all, and that’s saying something.

The only way to enjoy this trail is to cane yourself from start to end: give it everything and hit it with speed, launch at every jump, throw yourself into every corner and enjoy the ride, rest is something you can do at the end.  This trail is about burning bright and then burning out.  The country is so open you can see riders coming in the opposite direction from miles off, yet at the same time I found myself brushing within millimeters of trees, and there was more than once that I was sure it was all about to come to a very ugly end. 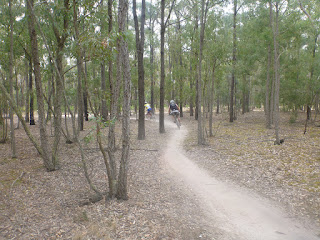 I got around the 14kms of track in under 50 minutes, including lots of stops for pictures along the way, and was so, so tempted to just turn left and do it all again.  Instead I decided to head around to taste the stockyards, which is where the gods abandoned me as I got around there to find that Specialized bikes were holding a demo day and had taken over the area.  Not feeling inclined to get into down-hilling at that point, I reluctantly pulled the bike off the roof and tucked it back into the car ready for the ferry trip, got changed out of my cycling clothes and started the journey back to Melbourne.

It was time to go home, and find some new adventures there. 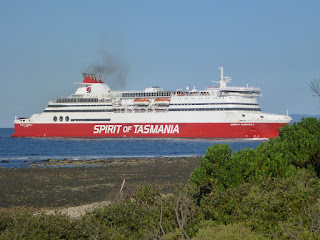