Decided to get out on the mountain bikes after work tonight and show Kim some of the trails around Knocklofty and Mt Wellington.

We headed up Knocklofty via the walking track from the end of Salvator Road (because one of us is too wimpy to ride through traffic: Hint: I’ve cycled through London at peak hour) and then cycled around the back of Knocklofty, down the Yelow Hippo (well one of went down the Yellow Hippo) and around past Noahs Waterhole towards the Slides.

From there it was one last climb up onto the Main Fire Trail and left around to the tracks I wanted to explore back down towards the Brewery.

Kim opted to follow the main fire trail around to old farm road and down to the Brewery from there, whilst I set off to see if I could find my way down the spur between McRobies Gully and the Old Farm Road.  I quickly found my way onto some single track which I had noticed on a previous ride some months ago, and set off on what I hoped to be single track bliss.

Expecting a nice fun downhill run, I found myself immediately heading up hill (what the f…?) before the world righted itself and the track started heading downhill.  The track is pretty technical and ‘rough’ … lots of steep turns, sharp downhills, ruts, rocks and logs to keep you on your toes (and in my case nearly send me over the handlebars once or twice).  I was kind of glad when I passed two young guys coming back up the hill who assured me that there was a way out to the brewery the way I was going. 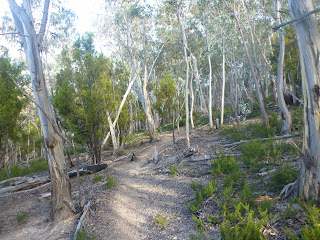 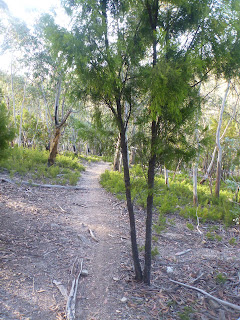 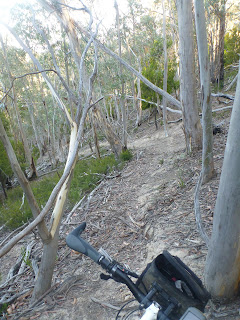 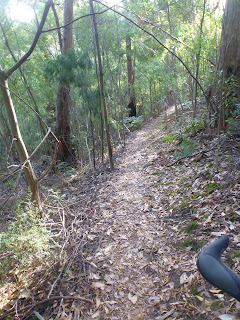 I did evenutally find the way out to the brewery, but had to take several random route direction guesses along the way … which is really just a great way of discovering more trail. 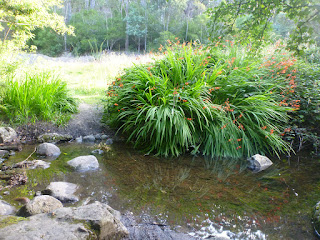 Kim had got sick of waiting for me by the time I got to the brewery, and not knowing about the Hobart Rivulet Track had headed back to her car staight down the road missing one of the nicest sections of the ride.  We met back up at Me Wah for some post race chinese (I’m sure that’s in my training diet…)  and called it a good night.

The funny thing is, that I think a month or two ago I would have been waxing lyrical about this track, but after tasting some proper mountain bike trails up in Victoria, well this just seemed rough and tumble.  Am I getting fussy in my old age?