After my aborted attempt at doing the full Kingston – Kaoota circuit, I decided to just head up and ride the best part of the circuit: the actual Kaoota Tramway Trail. 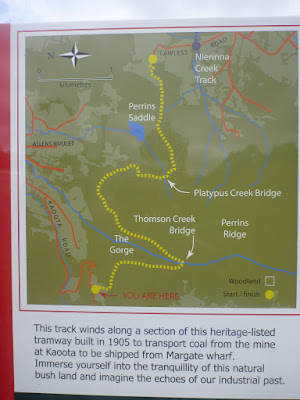 This is a 12km return ride, and I decided to start from the Nierinna Creek End so that I’d do the uphill leg first and then have a nice downhill run back to my car.  It’s one of my favourites near Hobart and is great for beginner – intermediate riders.

I had also just received my replacement ContourGPS video camera which I had sent off for repairs some three months ago, so decided to use this as a chance to have a bit of a play with it.

The ride is a great short ride, and it took me about 25-30 minutes to get to the Kaoota end and then 17 minutes to get back down again.  The first section up the road from the car park is the hardest bit, so don’t get put off by it.

I’m still very much a novice at video editing, but below is a speeded up version of my ride back down from the Kaoota end. It’s at 5 times speed, but it gives you a bit of a feel for what the ride is like (you may want to take some sea sickness pills before watching) and fitted well with the timing of Adele’s song “Rolling in the Deep“.

I’m having a real problem with keeping my camera pointing high enough.  I originally had it mounted on my handlebars but this had too much shake, so I’ve moved it to my helmet, but the weight of the camera seems to drag my helmet forward giving that low view look.  Oh well, I’ll keep on experimenting.