I last attempted to get up Mt Ida back in August last year. On that occasion Ida beat me fair and square.  Australia Day 2012 was the time to go back for round two.﻿﻿﻿﻿

Three of us headed off from Hobart on Wednesday night after work.  We got onto the lake a bit after 7pm and arrived at our campsite an hour and a half later just in time to see a beautiful sunset over Mt Olympus and get our tents up before full darkness settled in.

The next morning was a bit overcast but we could see Mt Ida poking out of the mist as we wandered around the coast to the beach.

I proudly demonstrated how I could use my GPS to lock onto the summit and how we could  then just follow the pink line to the summit before we got enveloped in the myrtle forest and lost all landmarks by which we could navigate.  In high spirits we headed along joking and talking and very quickly emerged out into a clearing just like last time, but a clearing which had a drop down into a valley on the other side of it … alarm bells started ringing in my head … There was no drop down on the walk last time.

We decided to siddle along to the right a bit, and as we did so I glanced off to my right to see a peak emerge above the bush, it was Mt Ida.  What the f…?  We had been heading away from it!!

A quick confab was had, I was demoted from leader to designated idiot, and we went old school  as Graeme took a compass bearing on the summit before re-entering the forest in search of the summit.

Despite this early error (note to self: having a GPS is not much use if you don’t actually look at it) we sort of got ourselves back on track, and I breathed a big sigh of relief when we pinged the same route up through the lower cliffs that I’d followed last time, allowing us to then head up onto the ridge and follow a fairly easy route towards the base of the top cliffs. 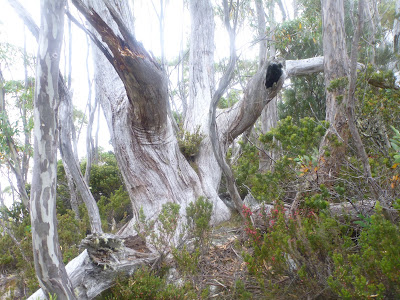 We seemed to get up the ridge very quickly and soon emerged from the bush, and this time made the all important left turn before coming onto the first of a series of cairns that marked a bit of a track which we were able to follow to the summit.  There were a few steep sections towards the top, but only one that was ‘uncomfortable’ as we had to clamber around one section with poor handholds and where you feel very exposed, but nothing like Mt Anne or Federation Peak.

From there it was a hop, skip and a jump and I had done it.  I was on the summit.

It was a bit overcast when we first got to the top, but it was warm and we hung around for nearly an hour during which the sky mainly cleared and we were able to appreciate the surrounding views.

Like last time, it was fairly hard to find our way back down through the bush and the GPS was very useful for finding our way back to the route through the lower cliffs.  Strangely, we seemed to follow exactly the same route down as I did last time (I wasn’t leading this time) as I noticed several key landmarks along the way.
It was good to get back down to the lake, with the walk taking us around five and a half hours, including just over an hour on the top enjoying the view. 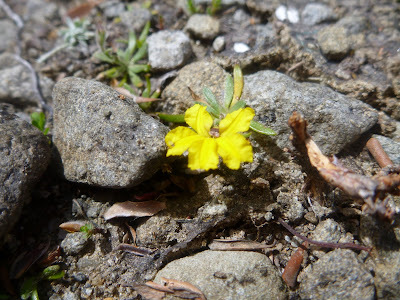 The paddle back was into a bit of a headwind, but it dropped off by the time we paddled back into Cynthia Bay and we enjoyed a refreshing swim before heading off to Lake Burbury for the night.
What a great day: Mt Ida: 1, Me: 1.  I’m happy with that score.

It was interesting when I got home to have a look at the two paths I followed to the summit.  The red line is the way I went the first time, and the blue line is the way we went this time. 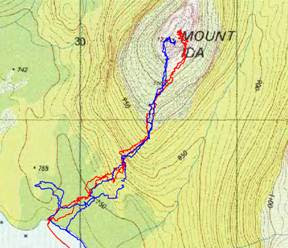 The first thing you’ll notice is the big dog leg to the left in the blue line where we were heading in completely the wrong direction, and you can then see how we then over-compensated to the right before merging back with the original route as we passed up through the first line of cliffs at about the 850m contour line.

The other obvious thing you’ll see is the divergence in routes at the top.  The red line was me trying to follow the route in the Abels book, the blue line is us getting to the top.