Skip to content
I departed Mt Buller rather tentatively, not because I was unsure of where I was going or that it was time to go, but rather because I had put my bike up on my new roof mounted bike rack for the first time ever and I fully expected to see it come flying off, catapulting through the nose of my ski, before it catapulted under the front of my car smashing it into a thousand pieces.
Not that I have any doubts about my handyman skills or my car.
As it turned out, the bike survived the drive to Beechworth, although I did cut the perfect stereotype of the Tasmanian driver as I thundered up the Hume Freeway at just over 90kms an hour.  My poor little car struggled a bit with a ski and bike on top and with me having the aircon on full blast, whilst charging my phone.  Did I mention that my stereo died about two days into the Murray Race so I’ve been driving around listening to a “Burke and Wills” audio book on my iPad.  Thank you Steve Jobs.
I booked into the Armour Motor Inn in Beechworth where I found the first limitation of having my bike on top of my car, namely that I had to take it off to drive into the hotel, then put it on and of course reverse this everytime I wanted to leave due to the low clearance entry.
However, Fiona there was really nice and friendly, even giving me a free internet voucher (which I never got around to using), but unfortunately she had never heard of the “Flame Trees Trail” which I told her I had come to ride, and I had to show her the reference to the ride in the brochure she had on her counter.
That said, she did everything she could to set me off in the right direction, and once it had cooled down a bit in the evening I set off down the rail trail in pursuit of one more track for the day.
Turns out that the actual trail starts a bit over 5km down the rail trail from where it starts in town, about half a kilometre past the junction with Diffey Road (which you could just drive to if you wanted to skip the rail trail section).
As I was not really sure where the trail started, I was cycling through a grassy section about 200 metres from Diffey Road when I saw some mowed sections running off the trail, so thinking this must be the trail, I jumped onto it and spent the next few minutes thinking what the heck this was doing in the http://www.thedirtydozen.com.au/ as it basically looked like someone had gotten a lawnmower pushed it around a few curves and called it a track.
Then I got to the edge of a bit of bushland and found the actual start of the track (well signed on the left hand side of the trail). This was better.
The trail ran for about 4kms on the left hand side of the road (don’t quote me on that distance) and it is fast and easy trail that you can have a lot of fun on (unless you’re a bit scared of snakes like I am).  After an initial longish run, the MTB trails drops back onto the rail trail to basically use it as a bridge to get across a low, boggy section, before heading back off onto another section of MTB track (again well signed).  This set a pattern for the rest of the ride out with it returning to the rail trail four or five times to use it as a bridge through lower sections, and it was only when I came out the last time and rode past the last low section to where I expected the trail to recommence and saw nothing there that I realised I was at the end of the current stage.  I doubt on the whole way down I ever went further than 10metres from the actual rail trail which just shows how good a use of space it was.
I was a bit regretful to turn around and head back up the other side of the trail, expecting to have quite a climb after the sweet run down, and so was very pleasantly surprised with the way the track meandered further away from the rail trail using the contours in the land to get you back up the track with fast easy riding.
All up it took me just over an hour to cover the whole ride (including the out and back from Beechworth along the rail trail and a quick ride along the lake in town) covering about 20kms in total which shows that it is a fast and easy ride as I’m a slow arse rider.  Be warned though, that the rail trail is pretty much all uphill on the way back from the trail, and works the legs much more than you’d expect.
All up, you wouldn’t come out to Beechworth just to do this ride, but if you were here and you’d already had your fill of the Mountain Bike Park (which I’ll write about next) then this makes a nice little additional ride, or as I did a nice easy evening ride.
Happy me! 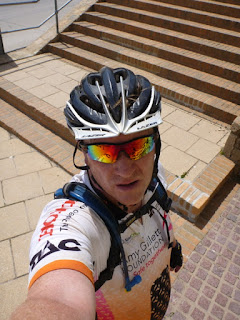