I’m going to let you into a secret:  I often have this secret yearning to climb to the top of Mt Ossa and just scream out to everyone below me (and in Tasmania that’s everyone) “GO TRAVELLING!!” and by this I don’t mean finally make that trip from Hobart to Launceston or vice versa, I mean get the heck out of Tasmania, get out of Australia, and see just how lucky we’ve been in the ovarian lottery.  I’d like Tasmanian’s to return with a little humility, and if my greatest dreams are answered I’d see them return with the knowledge that there is so much more on this pale blue dot of ours than we truly realise, and that there is so much we can learn from the rest of the world.

I am getting to a point here, but let me ramble a bit more: Several years ago a draft strategic cycling plan for Tasmania was released for comment with a stated vision something like “Tasmania will have a world’s best cycling network” or something like that.  I put in a submission to this noting that there are States in the USA who are spending more money on their cycling infrastructure than we do on our roads, and a more realistic vision might be to just grow our trails and enjoy them.  I never did hear back from that process.
Anyway, these two thoughts combined are why I’m sitting up at Mt Buller. 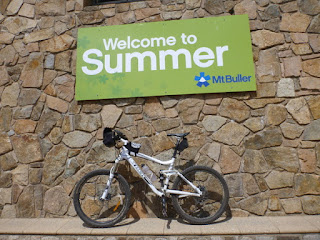 I figured if I’m going to be putting up my opinion of Tasmania’s best mountain bike trails on tassietrails.org, then I had better go and check out what is happening with MTB trails outside of Tasmania.  With this thought in mind, I did a bit of searching and stumbled across the website www.thedirtydozen.com.au which outlines 12 trails that can be ridden in four days in central Victoria.  The first three of these trails were up at Mt Buller, a location which is also meant to have some of the best mountain bike trails in Australia, and so here I am after a brief detour down to Melbourne to drop Bec off at the airport.
I was a bit nervous on the first morning about pulling my bike out from under all of the various bags and rubbish it had been buried under for the last week in the back of the car, but other than having no front brakes it all seemed in order, so I set off for where I thought the tracks started and soon found myself on the Gang Gangs trail exiting Buller Village towards Mt Sterling (Check out http://www.mtbuller.com.au/Summer/Bike-Buller/Cross-country-mountain-biking for a map of the routes). 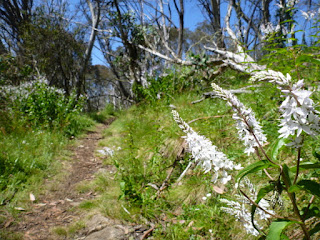 I was lucky enough to catch up with another group of riders at the end of the Gang Gangs trail who actually had a spare trail map which made my navigation a lot easier as I jumped next onto the Corn Hill and then Silk Lane trails to get me over to Howqua Gap and onto the trail I came here to ride: StoneFly.  Stonefly is tagged as the latest and greatest cross country trail in Australia, with a 6km climb on dedicated single trail up Mt Stirling followed by a four kilometre descent. 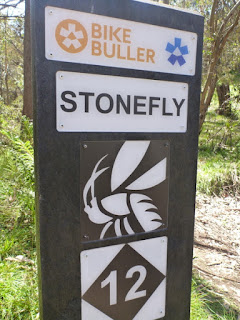 By now it was getting pretty hot (Melbourne was in the grip of a 40 degree plus heatwave) and I was starting to think that just bringing one little water bottle may have been a slight logistical error, but I continued onwards oblivious of the bonk that was to come.

The ride up Stonefly is absolutely beautiful as the trail heads up through high altitude eucalypt grassland forests coloured through with swathes of flowers of nearly every colour, and even better it isn’t just up, up and up … there are quite a few flat and downhill sections to enjoy on the way to the top.
I admit to finding that the combination of altitude, lack of fitness and heat meant that I found myself having to push up many of the earlier uphill sections simply because the turns were quite tight and steep requiring a fairly fast pedalling cadence which I just didn’t have the engine to provide.
The other issue that caught me unaware were what the locals called ‘mud flies’ but which I call horse flies.  They were big, their sting felt like the kick of a horse and everytime you stopped they descended on you in a cloud making photo taking a rather painful (and necessarily quick) affair. 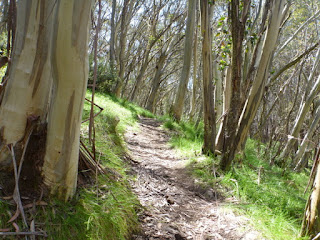 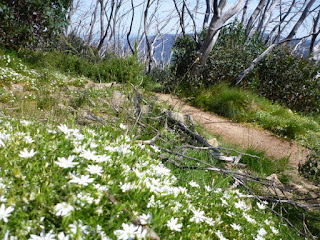 These flies also didn’t leave much time for resting on the way up, which could partly explain my rather fast ascent.
From the top there is a short section of old 4WD track, before you jump back onto the single track for the descent.  I almost got caught out by one very uncharacteristic sharp turn followed by a near vertical steep drop near the top of the single trail, but after that the trail was exactly what I expected:  flowing, flowing, flowing single trail.  In fact it was so long and flowing I almost got bored of it (I know, I hang my head in shame). 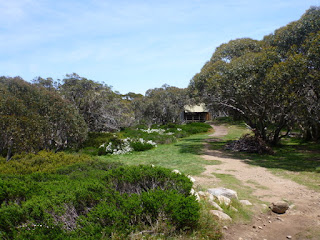 Back at Howqua Gap, I had a brief break and caught up with three cyclists from Queensland who were just heading up Stonefly before I headed back up Silk Lane which is where I ran out of water and basically bonked.
Fortunately my pride isn’t that great that I felt the need to ride the remaining tracks regardless, and so instead I took the fastest route back to Mt Buller along the firetrails where I managed to rehydrate and recover in my lodge.
The next morning I headed back out the same way and rode the rest of Corn Hill and also Misty Twist which was by far my favourite trail of the lot.  This was probably because I had plenty of water, it was a little cooler and my lungs seemed to be able to get a little more air in allowing me to ride up the return section rather than have to push.  I had a little play on the skills trail because no one was around, but of course just as I came crashing off a see saw obstacle a vehicle full of kids drove past. 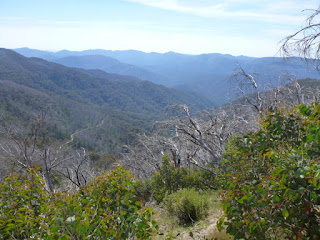 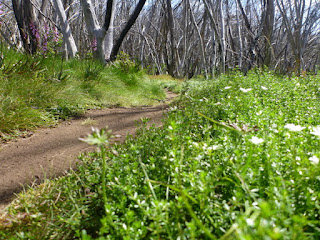 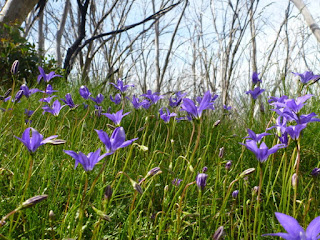 I also made the mistake of riding back along Corn Hill Road to get back to Buller rather than pushing straight back up to join onto the Village Family Trail as I did yesterday.  This little detour dropped me back off on the main road up where I had to grind my way back to the top in the heat of the middle of the day.
So what did I learn?  The country is magnificent, and the trails are engineering marvels.  However, I found the flow, flow, flow thing all a little bit boring (I know, hard to please).  Probably the biggest lesson I learnt from this ride was from talking to other riders and realising that these are the types of  trails that MTBs are being built for, not the muddy , grimy waist deep mires that I like to trudge through and this could be why my bike doesn’t last as long as I’d like.  I still can’t forget talking to three guys who assured me they won’t go out riding if the trails are wet because of the damage it would do to their drive chains and brakes.
Is this really where MTBing is going?  If so maybe I was wrong, maybe we should all stay down in Tassie and just enjoy what we’ve got down there.