Skip to content
I’ve tried to sit down and write about the Half Murray Marathon several times over the last couple of days, but it seems that the words that I put on the page just don’t seem able to capture what I feel I should say about this event.
I’m torn between telling the story of what I went there to do: namely to paddle a large distance and achieve something large in my life and what I actually achieved which was to race a large distance and enjoy myself more than I could ever have imagined. 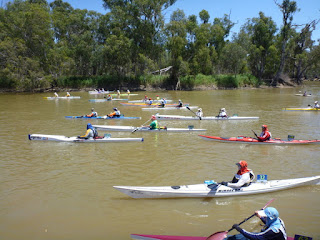 You see from the first minute of the race, I found myself in third place, so a bit like Forrest Gump when he ran to the farm gate and decided that felt good so he just kept on running, I also felt good, so I just kept on going.  For nearly 20 more hours of paddling, 200+kms over five days I raced all the way down the river, and the story I’ve been trying to type is the story of the ins and outs of that race, but it’s a story that doesn’t seem to want to be told, because it misses so much about the event that I feel needs to be told. 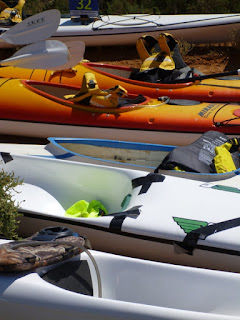 Firstly the story of the river itself.  The river is absorbing in its beauty in that it is both unchanging and yet never the same.  Around every corner something changed:  the banks, beaches and snags were constantly changing, the current raced and stalled seemingly with no rhyme or reason, the water surface went from millpond smooth to being whipped up into white caps in the space of seconds depending on the river and wind direction, and also the atmosphere as many of the hundreds of campers stranded on shore by the closed river cheered or laughed you along. 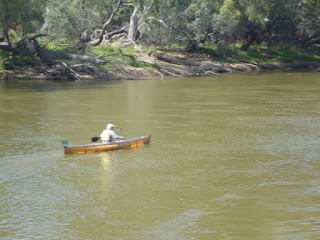 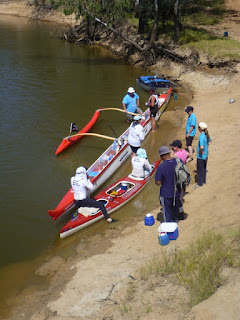 On the water you were constantly passing or being passed by other paddlers, sometimes you’d paddle along chatting together for hours and other times it would be a fleeting encounter and a few words of encouragement or shared pain.
The people on the water were amazing:  I remember at the end of Day four, a few kilometres from the finish at Echuca, I passed a lady doing the full marathon.  She asked me how I was going and I made a small quip something like “great, but I’ll be happier when I’ve crossed the line”.  She looked across at me with this big smile on her face and said “Why would you be happier when we cross the line?  Look where we are, and what we’re doing.  Why would you want to be anywhere else but here and now? Why would you want it to end?”.  She was right, it just took me a while to realise it.
At the finish line on that same day, another lady pulled up just after me and as I turned to congratulate her, I noticed her hands were completely covered in plaster.  She had blisters on every single finger of both her hands and on her palms and yet she was just so happy to be there and to be paddling she couldn’t stop effervescing about the day.  I want to be like that.
Perhaps the defining moment of the race for me came on the first day when I was coming into the first checkpoint  (Charile, 24kms from the start).  I was pretty sure I was in fourth place behind two singles and a double team (there were 14 half marathoners and another 6 or 7 Junior teams doing the same distance) and so a bit fired up at a possible third place in the singles, I wanted a quick turn around with food and water.  There was just one problem – there seemed to be something like 200 people standing on the river edge, and not one of them looked like Bec.  I scanned for her red shirt, I looked for my car, but as I drifted past the 100 metre or so length of the checkpoint I came to the horrible conclusion that she wasn’t there.  Running out of checkpoint area, and not knowing quite what to do, I pulled up onto the beach with what must have been a very lost look on my face.  A girl on the water’s edge looked at me and asked if I was OK, to which I responded that I was fine, I just couldn’t find my support crew.  The next thing I knew her whole crew was all over me, feeding me lollies, sprinting up the beach to grab fresh, cold water and refill my camelback, offering me a sandwich and other food to eat:  heck one girl even held my paddle, whilst another turned my boat around and got me ready to get back out there.  That and all of the hundreds of other moments like them, are to me what the Murray Marathon was about.
But yes, I also raced, even though I wasn’t in the racing category and so never really knew where I stood as my times weren’t posted against the other racers, and I wasn’t awarded a handicap.  I did know at the end of the first day that the time on my GPS had me about 3rd or 4th across the line, and at the end of day 2 I checked with the officials and found that I was coming second overall for line honours for single kayaks in the half marathon (there was also a relay team in front of me).

I think the guy, who was “officially” coming second also may have realised this, because day three was one of the toughest and fastest on the water as we raced each other for the full fifty kilometres.

His name was Pete and he had already run me into a sand bank on day one going past me too tightly on a corner which hadn’t put him in my good books.  He was obviously both a very good and clever paddler using the other boats around him to make getting down the river as easy as possible.  We raced so hard that we kept up with the double relay boat all the way down to Delta Checkpoint (over 30kms), but finally Pete broke about 10kms from the finish and I managed to take about 2 more minutes from him.
Day four, we also set out racing like devils for the first 8kms, but much to Pete’s credit after getting a jump on me by getting one of the sweetest wave wash’s ever, he dropped off the back of the boat he was sitting on and waited for me after realising that I hadn’t got on.  Basically day four was an unofficial truce and we just paddled down the river together for the whole rest of the day chatting away.  OK we were keeping up a fast pace and we did race the last few hundred metres, but I got to know and like Pete that day and realised that I respected him. 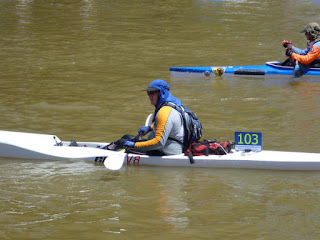 Day five was stinking hot, but the paddle was only 21kms, so I thought I had it in the bag with fifteen minutes over Pete.  However,  just to show you should never take anything for granted, Pete jumped very quickly from the gun and I was struggling in the heat and just couldn’t follow him.
He got onto the back of a double team, and I had to watch as he pulled further and further ahead.  About half way down the river I was only glimpsing him as he rounded the farthest corners in front of me, but all I could do was hold the fastest pace that I could and hope that my fifteen minute buffer was enough.
Then I hit a submerged log.  I saw it coming, but I saw it too late.  I had been paddling with this young guy who was talking a million miles a minute and had let him distract me and despite my evasive manoeuvres I heard a sickening crunch as my underslung rudder slammed into the log at 12km/hr.  As soon as I slipped off the log, I wiggled my rudder and was relieved that I still had steerage, but I had no idea what damage I had done to my hull, but realised all I could do was paddle and see if I stayed afloat.
Miraculously about 3kms further down the river, the exact same thing happened to Pete (except he had a retractable rudder) so I was able to catch up to him as he had to pull into shore to reset his rudder which had flipped up out of the water.
We were back together and pretty much paddled the last few kilometres down the river side by side.  We caught up to one last double about 5kms from the finish.  These guys were obviously exhausted, so I pulled in front of them and slowed down to let them get on and wave-wash me down to the finish line.  The gratitude in their voices was palpable, but strangely it wouldn’t have seemed right to not have done so at that stage of the race.  My experience is that a good wave wash can make paddling up to 20% easier or faster.
Then we came around a corner and there were the crowds at the finish line.  It was over.  I was sore yes, I was muddy and sun burnt, but I’d also had five of the best days of my life and all I could really think of as we pulled my boat out of the water and congratulated all of the other paddlers around me was that I wanted to do it again … I wanted to do the full Murray (probably in relay), because these were five of the best days of my life, these five days captured what I want life to be about.
It was the perfect ramble down a wet and muddy trail.
Thanks Bec for being the most amazing support crew and making it possible.