Thor “I have no plans to die today“
The Gatekeeper “None do.“

I’ve had something that’s felt a bit like a chest infection since Thursday last week, and a bit worried that it was hanging around and I had both the Freycinet Challenge and Cape to Cape MTB races coming up in the next few weeks, I decided to play it safe and go and have a quick medical check up.

I couldn’t get in to see my normal doctor, but decided to go and see another one of the doctors in the clinic anyway.   After reading out my admittedly somewhat concerning history (ongoing chest tightness, just come off Warfarin after being treated for a blood clot for six months, and having just had a bad reaction to antibiotics) it was probably quite reasonable that the doctor recommended I have an ECG.  What I didn’t expect was that it would give an indication that something was slightly awry with one of my heart waves.  Let me tell you, if my heart wave wasn’t already askew, it was after that little bit of news.

I was given some of that under the tongue heart relief spray, and somewhat worryingly it had a startingly immediate effect on reducing my chest tightness.  I had just enough time to call work to tell them that “I might be a while” before a paramedic crew was there, I was put on oxygen and wheeled out to an ambulance where I was given a second ECG which also confirmed that my heart rate was slightly abnormal.

It was at about this point that I went from worrying about my car being left in a one hour parking zone and the work I was supposed to get through that day, to worrying about whether it was really going to matter.

Before I knew it, I was at the Royal Hobart Emergency Room getting yet more ECG scans, blood tests and having to tell some nurse every three minutes that I either did (cuethe spray) or did not have chest tightness. 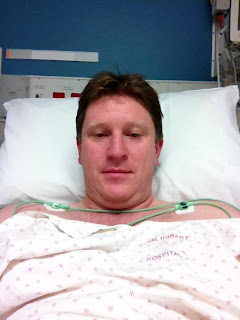 For the next three hours, while I was waiting for the blood tests to come through, I had to live with the fact that every breath could be my last, and for a further three hours after that I was left with that nagging doubt that this could be my last day on earth.

I don’t say this to be melodramatic, but rather because it was a gift that we’re usually not given: I got to look at my life from the perspective that this could very well be the end of it.  What I learnt today was that I didn’t spend my time wishing I’d spent less time at work, or having had more adventures, I realised without even consciously realising it that my life has been good, in fact it’s been great and I’ve loved it and if it were to end today, then it was as complete as it could be on that day.

That’s an amazing thing to know about yourself.

I ended up spending most of the day listening to the nurses and doctors, letting traineee nurses practice on me and generally having as much fun as one can in an emergency ward.  I even got to find out how one of those wee bottles work.  OK, so that may not have been on my bucket list, but I had always been curious to know …

At about 6.30pm, a doctor came up to me, told me I wasn’t going to die today and so I should get dressed and get the heck out of their bed so it could be given to someone who might.  Sounded reasonable to me.

There was no fanfare, I threw my clothes on (still with all my ECG pads and blood line patches on underneath and with my hospital bracelet on my wrists) and was told by one of the nurses to just follow the red footsteps out the door.  No guides or goodbyes.

Five minutes later I walked outside, took a cab to my car (no parking ticket thanks to the nice ladies at the doctors who put a note on my windscreen), drove home and resumed a normal life.  Today I was one of the lucky ones whose plans not to die, went to plan.

Enjoy your life, you never know what it might be your turn.