There’s still a lot to digest about my four days in the Cape to Cape.  In fact as I write this I’m sitting in the Dome restaurant at Perth airport, it’s 11pm and I’m looking out the front door as the rain pours down.  I’m wondering if even now, over 24 hours from the end, if I’m far enough away from the event to even begin to see it clearly.  Perhaps I’d be wise to wait until I got home? 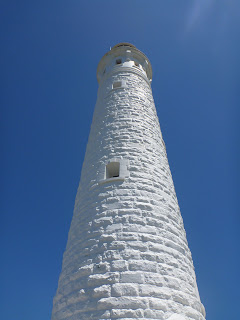 Well it’s fairly safe to talk about the stats:  I cycled 226kms, it took me 15 hours, 12 minutes and forty eight seconds.  I came well (well) down in the standings, in fact they’d need to dig a hole to be able to show where I came in the standings (423rd).   The only good statisctic is that according to my heart rate monitor I burned 72,408 kilojoules – for once a big number that looks good.
What can I say beyond this?  I recall writing recently about how for me races tend to occur in four parts, well in this case each day represented one of those parts.
Day 1 was despair, pure and simple, I went out as hard as I could and I just got ridden off the pack like the pretender I was. The tracks were divine, in fact over the whole four days the tracks were just amazing, but when you don’t have the fitness to enjoy them, well one man’s pleasure is another man’s pain.  Today was pain. 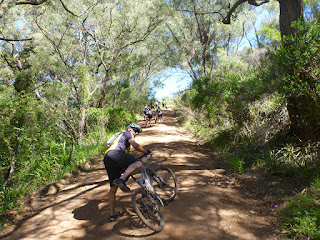 I expected day one to be a short warm up.  It isn’t, it is easily the toughest day of cycling of the four especially for those who don’t like steep hills, I got off and walked my bike up nearly every incline towards the end, and the fact that virtually every other cyclist around me was dong the same brought little solace.
At the end of the day I was beyond shattered, I got off my bike at the end and almost fainted, I had that light headed feeling I’ve had before which had proceeded vomiting and dizzy spells, but thankfully this time I managed to pull myself together.  However I lay in bed that night thoroughly convinced that I couldn’t do this race, that I didn’t have enough to continue. I was in short, right at the cusp of the first part of the race – I was in despair at what was to come, with only the smallest voice whispering to me to persist, to survive.

I had a restless night, but during its course I realised that amid the clamour of doubt, this was indeed all I needed to do on day two – survive. I didnt have to go at it 100%, I could throttle back a bit, keep a little in reserve, treat it like a marathon, not a sprint, and hopefully just survive to the finish line.

And this is what I did.  After an initial climb on bitumen road out of Hamelin bay, the trail turns to single track and passes through 30kms or so of bush trails through delicious forest before coming out into more open scrubby bush and sandy soils and then finally a network or rail trails, farm tracks and gravel roads through private property and vineyards. 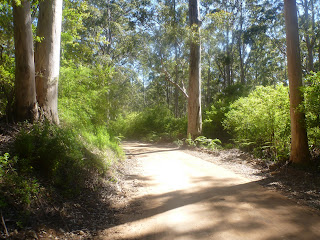 There were still some brutal climbs, and some very frustrating delays at the start as the back half of the pack would just get stuck behind less experienced, slower riders who had gone too far forward and held everyone else back, but overall, I crossed the line exhausted, but not defeated. That was as good as I could expect coming into the day, so I took it. 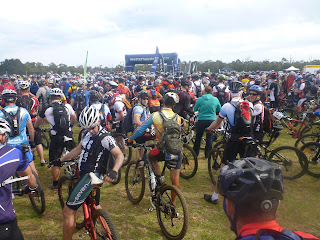 So I started right down at the back, and this turned out to be a huge tatical mistake.  After a fast first few kilometres we hit the bike trails into Margaret River and as this narrowed to single trail the ride just ground to a halt.  It ended up taking nearly an hour to travel the first 10kms, and most of that was spent standing still as we waited for the riders in front of us to go over “Technical Trail Features” (TTF’s) one at a time.  The call of “TTF” was a common cry of derision as we’d finally get up to the choke point to find a log over the track with a diameter no larger than a coke bottle, or a tiny little up-hill section which any half experienced rider should have been able to get over.  To add insult to delay, the track crossed over itself in a figure eight just outside Margaret River so we also had to spend many minutes waiting for all the riders in front of us go past and get further in front of us.

However, maybe this was a good thing as it did let me do an easy first 10kms and warm up the legs, plus it got me angry, and so when the traffic did finally lighten up I attacked the trail with a vengence chewing up rider after rider.  The track soon entered some amazing pine plantation trails and it was biking nirvana, even for someone as beaten up and destroyed as I was. 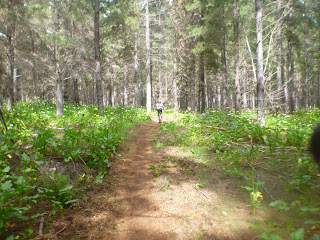 Unfortunately I enjoyed myself a bit too much and so wasn’t watching my food intake.  I bonked around kilometre thirty-five and suddenly found myself falling backwards through the pack as we left the pines and entered more open trails and eucalypt forest.  The riding was good, but when you’re broken inside, you don’t see the beauty that’s around you and all I remember is hills, more hills, and constantly trying to re-fuel.  Suddenly those TTF’s didn’t seem quite so easy. 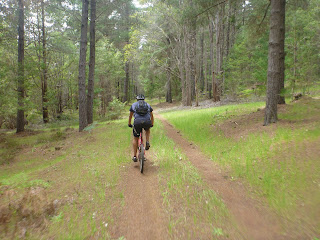 I pushed across the finish line in just under four hours, but although I managed a sprint over the last half a kilometre, for the first day today there was no one to chase down before the line, just the demons that circled in my mind.  but I’d persisted, I’d got myself into the final stage of the race, both literally and figuratively.
Day 4.  I woke up tired and my knee was so sore I could barely get out of bed.  I had taken to sleeping in my Skins and I think they made a difference for my muscles at least.  What I did like is that on the starting line, I felt something inside for the first time since the starting line three days ago – excitement, anticipation … I felt that I could do this. 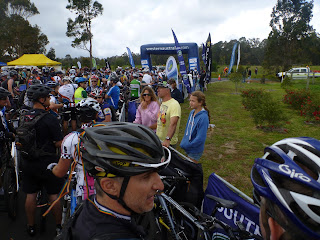 I had arrived a bit earlier than normal and set myself up a lot closer to the front of the field and what a difference that made.  Today I managed to roll out with the mid-pack riders and as the ride charged across fast farm tracks, gravel roads and rail trails I found myself able to work with the riders around me in free-wheeling, hard pedaling fun.  I clocked up 22kms in my first hour (compared to 10kms yesterday) and reached the half way point still pushing an average of over 20kms/hr. 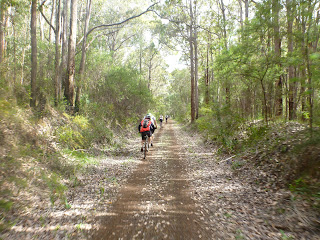 Todays riding was described in the riders guide as the fastest and easiest and it was, with the route including many sections of road, some even with bitumen.  Heck, even some of the bicycle trails were bitumen. 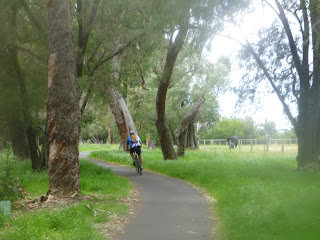 However warnings had been whispered of the ending: 5kms of technical single trail over loose pea gravel trails.  It wasn’t the pea gravel that got me though, it was the heat.  I’d ridden 62kms without a break by the time I hit the last climb of the day and suddenly I felt like I was in an oven as the white gravelled hilled combined to reflect back the sun.  I felt like a grilled cyclist.  The single trail, by contrast, turned out to be great fun, I even timed my run into the finish using my GPS … except that as my GPS hit 68kms (which should have been the finish line) I passed a marshall who call out “just over a kilometre to go”.  I broke, my legs just gave out, they’d given me everything and had no more.  I just managed to grab the wheel of the rider in front of me to hang on to the group for the final kilometre.  I therefore came up to the finish line with a group in front of me and although I could have overtaken several riders, well it just didn’t seem right.  I’d finished.  I’d survived and to try and claim anymore than that didn’t seem right this day. 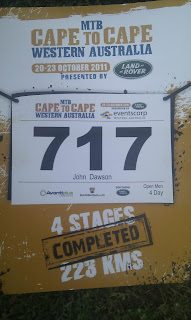 In hindsight (a week has passed), I now realise what should have been obvious – whilst you can enter a four day mountain bike event with no training and no fitness and get to the end, you can’t really enjoy it with that strategy.  I’m proud that I didn’t give up, I’m joyous that I finished, but the truth be told I wish I had had the foresight to train, to get fit, because only then could I truly have enjoyed this magnificent event.

I’m told that the event expanded from 350 entrants to 750 entrants this year, and that may explain some of the problems I had with the event.

Whilst the event covers some magnificent trails, the event itself was marred for me by too many riders.  Sure if you’re at the front of the pack you’d have a great run, but I talked to too many people, like myself, that wanted to strangle the organisers.  You can’t send 750 riders off onto a single trail and call it a race.  I probably spent nearly an hour overall, just standing still or moving at 1 or 2km an hour as we moved past choke points.  Every day it would be 3 or 4 minutes before I’d even cross the start line.  I remember on day 4 racing past riders only to come to a main road and then be stopped for four minutes as the traffic passed.  Four minutes meant that every rider I passed had caught up to me again.

Furthermore, whilst the volunteer marshalls were great, they’re not cyclists and they didn’t realise that yelling out things like “only 4kms to go” when in fact there were 7kms to go, doesn’t help a rider in the long term, it doesn’t make that extra 3kms go away, it just means you use up your energy before you need it.  Similarly the distance to go signs were atrociously inaccurate.  I think that Day 4 took the cake – it had two “Half Way” signs – they were just 3kms apart.

There’s other small things as well.  There’s very little information for interstate travellers about how best to organise yourself around the event (where to stay, what transport options there are), and although there was a bus service from the finish back to the start each day, there was no way of transporting some clothes from the start to the finish (other than on your back) so often it would be 2 or 3 hours after I’d finished before I had stored my bike, got a bus to the start and driven back to my hotel to get changed, have a shower and get some food … not an ideal way to finish a day. 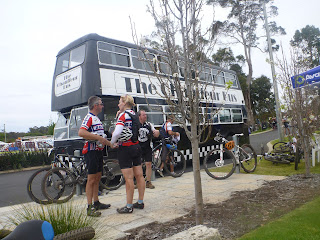 Hopefully, the organisers will think about this some more next year – maybe they’ll try staggered starts, or use riding chips for timing, maybe they’ll provide more information about transport (they did provide this information, but only two weeks before the start of the event long after you have to book everything else).

However, when all is said and done, it was still a great event and if you ask me whether you should do it … I’d say go dance with your demons on some brilliant trails … Yep, I’d say go west and play.