Despite feeling a bit kicked around by the Cape to Cape event, I still wanted to get outside and do some exercise this week, especially as I realised that it was now less than nine weeks until the Murray Half Marathon where I’d have to do it all again … though this time though it would be by boat not bike, it would be five days not four, and only 202 kilometers.  Plus this time it would all be downriver.  How hard could that be?

So after getting back into Hobart on Tuesday, I went out and joined the club for the normal Wednesday night paddle, and even managed to produce a good pace almost keeping up with the faster paddlers until the very end.  I was happy enough with that.

Saturday morning dawned overcast and threatening, but I just needed to get out and play anyway.

I headed out for a paddle, this time from Kingston Beach.  The conditions were a bit too rough once I got around the headland and into the open sea, so I ended up doing a few runs in and out of Kingston beach before realising that Brown’s Rivulet was open and that I could just paddle right in (always wanted to do that).

So in the end I went for a nice explore up the rivulet before returning to the beach, doing a few more runs and practicing my self rescues … much to the amusement of the kids who were there for a sailing day watching this idiot who seemed to keep falling out of his boat. 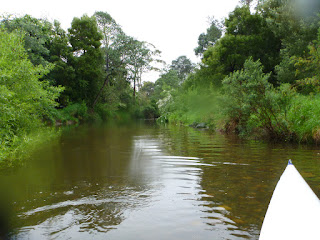 Kim and I had agreed to compete in the Ellendale 4 hour MTB Bush Rogaine, and set off in good spirits for a bit of fun and exercise.  The course looked pretty easy (navigationally) and we pinged the first control and moved quickly to the second.  I was in particularly good spirits because every single other group, except one, had gone in a different direction than us, and even that exception headed off somewhere different after the first control.  I love it when I go my own way. 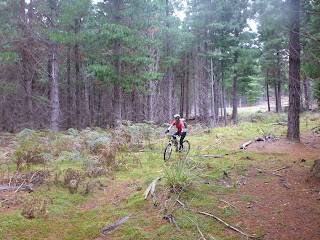 Just before the second control, which was in a pine plantation, I lost my back wheel going over the smallest of logs and before I even realised what had happened I was on the ground, bruised and confused.  I managed to unclip and get up unhurt, but it still shook my confidence a bit.

I shrugged it off and we proceeded to ping two or three more controls pretty quickly, though somewhat worringly I was really struggling to keep up with Kim’s pace on the hills and roads.  The smallest of demons began gnawing at my confidence.  I found I had no motivation at all for being here today, and found myself thinking that maybe I should have given this one a miss.

Over the next two hours, I had what could only be described as a bad day.  I crashed for a second time going through a deep puddle and couldn’t unclip in time.  This led to me lying in the puddle with my bike on top of me struggling to get out of my pedals. As I twisted and turned trying to get out, I managed to trigger a small cramp in my right calf which I really didn’t need.

Kim found this dreadfully funny, which pushed me inside myself and I found myself battling a growing number of demons in my head.  The gnawing had turned into a roar.

Not long thereafter, Kim, who had forgotten to bring a map board, took off down a hill whilst I tried desperately to call after her to stop as she’d miss a control.  It should have been nothing, but I got very frustrated and rather than let it out, I just bottled it up inside and went quieter and quieter.  I was in a very dark place indeed and struggling to get out of my head. 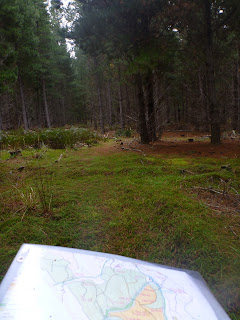 I told myself that things couldn’t get any worse, that I just needed to shift my attitude and enjoy the day, but my feet kept getting stuck in my pedals causing many near misses as we crossed extremely  soggy ground and I kept wrenching my sore knee trying desperately to get my feet out each time which just shoved me further into the wrong headspace.

Then my chain started getting sucked up into the front derailer and I found myself riding in all the wrong gears to try and keep going forward.  By the half way point I was fighting my bike and fighting my demons even more. Any pretense of outward good humour had long since vanished.

The only reason I kept on going at this point was that I had slipped into ‘stubborn’.  I was going to finish this race no matter what.  I was vaguely aware at this point that I was upsetting Kim with my brooding silence, but I wasn’t in a place to fix this, all I had at this point was the will to go on, and that was driven purely by a brooding anger not to fail.

Perversely at this point I was actually approaching a new source of happiness:  I could feel it growing inside me, but it was still too fragile to grab hold of and use.  It was that growing will to just go on, to beat my demons, to push forward purely by will knowing that at the end I would look back on the battlefield and know that I had won. I wanted to beat my demons this day.  I had to beat them. 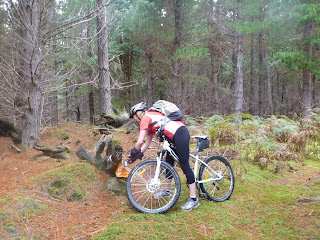 We came up to another pine tree that had fallen across the track, and as I lifted my bike over it the back wheel got caught on a branch and I couldn’t get it unstuck.  I think I may have screamed or swore in frustraton before I eventually managed to get my bike over the log.  I started climbing over myself, and just as I got half way over the log, I realised I probably had just freaked Kim out, so I turned to explain that I was actually OK.  However, just as I did this, I put my weight on a branch which promptly snapped sending me crashing over the log and down into the deep mud on the other side.

Sitting there in the mud, I felt a small smile creep up from inside.  I’d gone so far into the dark tunnel that I could start to see the light on the other side.  I knew it would take a while for it to get brighter, but I was at least able to try and explain to Kim not to worry, and that I was actually enjoying myself in a very dark way.  I’m pretty sure she didn;t believe a single word I said.

Just to prove that this wasn’t to be my day, I next found myself deprived of around half my gears as my chain suck got worse and worse.  basically every time I tried to put some pressure on the pedals,  my chain was getting sucked up into the front derailer and locking, so my only option was to spin in a very easy gear, or to climb into my biggest gear.  About thirty minutes after this had gotten really bad, we pinged our last planned control for the day, and I had the sense to agree to an early return back to base. 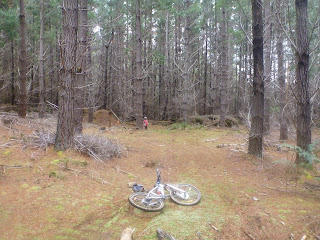 Somewhat ironically it was Kim that did finally lose her chain, just two hundred metres from the finish line, however, we still got back with about 30 minutes to spare amassing  a total score of 1,540 out of a possible 1,900 points.  What was really surprising was that we actually managed to win the mixed-open team (admittedly against only one other team, but a win is a win and ultiamtely we got the wine). 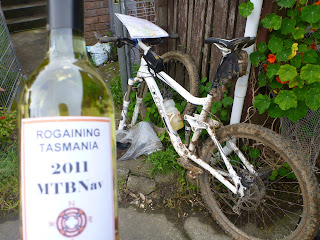 By the time we got back to Hobart we were both laughing and the days run with the demons was almost forgotten.  To be honest there’s a part of me even now which is tempted to just delete this blog and let it lie unknown.  But the truth is that today’s battle occured, and it’s probable that it will happen again.

But that’s part of the essence of competing: somedays it’s pleasure, somedays it’s pain.  But as Bill Martin recently said in an interview on why he does ultra-sports “Suffering brings you somewhere,”  “It brings you to a different place.”