We stopped at the turn off onto the first bit of ‘track’ for the day, and as we glanced down the very muddy descent I stressed how slippery and rutted this section could be.  If only I knew how prothetic my words would be. 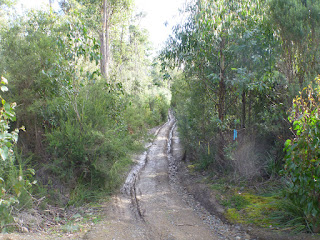 I took the lead, and gently headed down the hump between ruts until I saw a good clean run that led into what looked like a nice flat paddle, so I let off my brakes and let the bike build up a bit of speed to get through the water.

My front wheel dropped into the puddle, and just stopped.

Before my brain could even begin to process what had happened I was flying head first over the handlebars and found myself embeded face first in foot deep mud, with my bike crashing down on top of me soon after.  I stood up, still trying to process what had just happened.  I was covered head to toe in mud.  No injuries however, so looks like it was going to be a good day.

What I’d hit was just a taste of what was to come, with the next kilometre or so of the track being churned into a morasse of deep ruts by irresponsible four wheel drivers.  It was a mess and most of it had to be pushed. 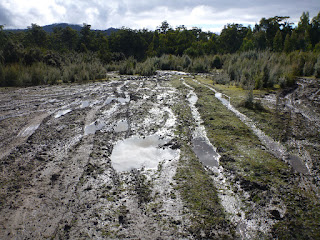 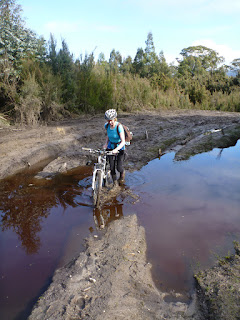 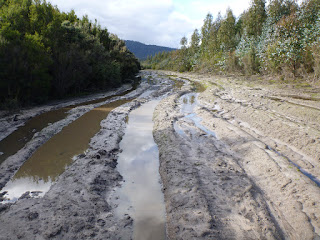 The rest of the day’s ride (a circuit following the better sections of the Tahune MTB 50km race with a side trip out to Glover’s Bluff and Reuben Falls) was splendidly fun, although I was disappointed to see that the last section of single track off Fletcher’s Spur 2 is now very overgrown and ends prematurely at a new road that has been pushed through, so it is no longer a riding option.

The joy of this 50km circuit has to be the old 4WD track leading back up from the southwood site towards the bridge over the Weld River, plus the 13kms of predominantly downhill riding on the return from Reuben Falls, but it is the totallity of the ride which really makes it a great day. 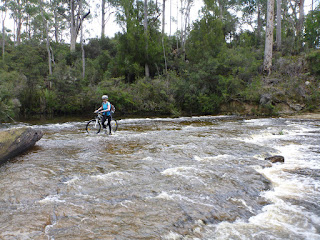 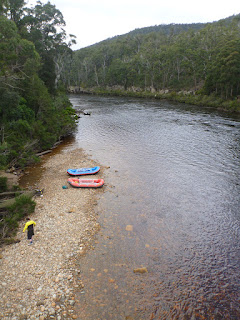 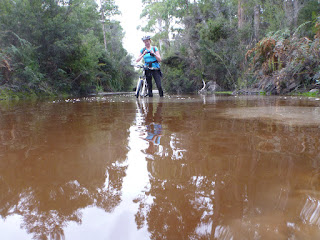 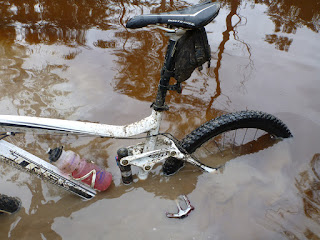 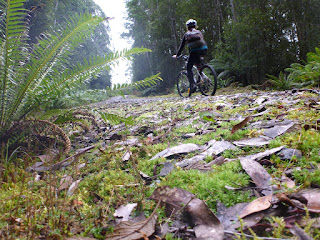 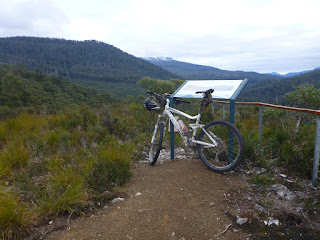 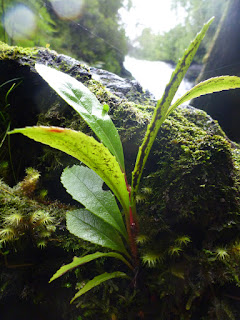 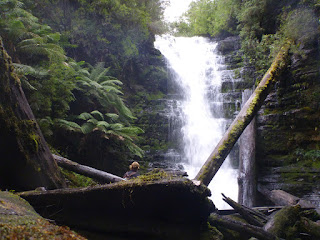 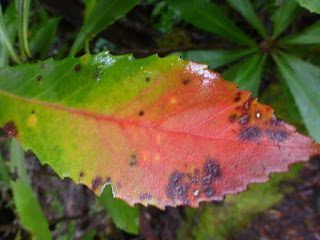 All up it was a great days cycling, though given some people’s bike handling skills I still wonder how the heck we made it back alive:

We spent the night at the Airwalk Lodge, and were the only guests.  It was great having a log fire and Kim cooked a wonderful meal.   We did have to chuckle at some of the lodge touches like lack of  a colinder (this seemed to be a bigger issue for Kim than it was for me), the fake lino “wood panel” floor (good look for Forestry Tasmania) and truly horrible mattresses.

Also for some reason they put me in one of the outside rooms, meaing I had to walk around the outside of the building to get to the kitchen and toilets in the cold and the dark, and had no heating in my room.  Why they put me there in the middle of winter, when there were no less than five spare rooms in the main lodge I will never understand.  However, once I’d hauled my bed from the outside room into the main lodge so I could sleep in front of the fire, this fixed that problem.

We finished the day with a walk around the airwalk under the full moon.  It was just magical seeing the rivers illuminated below us. 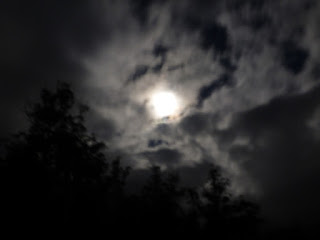