Sitting on the water at Franklin, with the mist swirling around my boat on the starting line, I felt the joy, nervousness and anticipation of a player stacking up his pieces at the beginning of a chess game.  In just a few minutes we’d start moving our pieces, and over the course of the next hour the game would be decided.  It was delicious.

A kayak race, any race, may seem to the uninitiated to be a bit repetitive, but like a game of chess, although the players and board may all look the same before the first piece is moved, the outcomes are actually infinite, and that’s the reason why we play again and again.
So the gun goes off.  It’s begun. 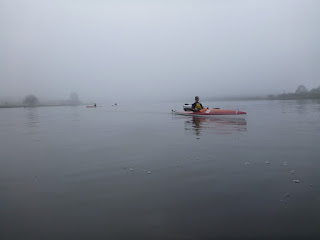 A pack of six to eight paddlers quickly took off faster than I can follow, and I found myself surrounded by a few familiar faces from previous races as the first few moves of the game take place.
There’s one guy who is obviously stronger than the rest of us, and he starts to pull ahead, first a metre, then two and then ten.  I recall Ben’s instructions from training the other week about jumping, and up my tempo and push into the red zone to grab the guy’s tail.  In the process I drop all but one of the other paddlers I’m paddling with.

I just manage to grab mystery man’s (we’ll call him fast man) tail and settle into a tempo behind him as we sit 20 metres off the front group.  But then something strange happens, my fast man starts taking a different line than all the front paddlers, and over the next couple of minute he arcs further and further to the right.  I start getting nervous about his play, and decide to see if I can surge off and catch the group out front after my brief respite.  I make my second move of the day, and break off to the left, but less than a minute after I jumped, I realised my mistake:  the leading group had paddled into a bay in the mist and were now veering hard to the right.  I was on the correct line to start with, but now found myself in no-mans land.  Not a good opening move.

Fortunately I managed to cut back across and rejoin my original group, but I had burned up a lot of energy in the process and had to watch as the front group started pulling slowly away in front of me.  I couldn’t take it, watching them slowly pull away like that so I ignored good sense and surged again.
It was a mistake, I briefly began to the bridge the gap, but burned up all my reserves doing so, and before long I had to again watch as the game began to widen and now I had burnt my reserve reserves and had two paddlers sat on my backside.

In short, the opening moves had been made, and in gambling for a win above my skill level, I now found myself moving into the middle game in a very weak position.
It stayed like this for the next few kilometres.  I tried jumping on the tail of a few of the faster paddlers coming past from the more advanced groups, but just hurt myself further in doing so for no real gain over the other paddlers.

I also tried cutting out into mid stream hoping that one of the two guys behind me would come around inside, but Mr Black (he was in a black kayak) just stubbornly sat on my tail no matter where I took him.  Fast man though realised the folly of my line and cut right across to the other side of the river, then back again and ultimately we found ourselves back together at the half way point as we turned around the end of the island and headed back into the slight but biting breeze.

Much to my surprise, after sitting on our tails the whole way down, Mr Black tried to make a surge on the inside line soon after the turnaround point, but his attack wasn’t anywhere near strong enough, and  I lazily jumped onto his tail as he went past and let him wear himself down a bit.  At this same time two more paddlers from the faster group caught up to us, one went past wide on the left, but the other just pulled up beside me and just seemed to hold there.  Mr Black tried to surge a couple of times, and I could see he was tiring.  I figured I could jump onto the tail of the guy who had just gone past us, but was unfortunately cut off on the left by the other paddler.  In hindsight, I made a strategic mistake at this point, I should have just jumped when … let’s call him yellow man … was still only 10 metres out front, but instead I worried about cutting off the guy on my left, so I paused for another minute, in which time yellow man stretched his lead out to 30 or 40 metres.
Then I jumped, and for about a minute I launched into a full on sprint opening up a 20 or 30 metre gap between me and the other three paddlers, and for the next few minutes I put everything I had into bridging the gap across to Yellow Man, and I came, oh so, so, so close.  I got back within 10 metres, but eventually I had nothing left and found myself, yet again fading behind into a no man’s land by myself.

I realised at this point that, deep into the middle game, I had outpaced all my usual competitors, and had even jumped a few people faster than myself. All I needed to do now was hold a good pace and not let those behind me work back onto my tail and I’d go into the end game with a good safe margin.  I settled into a strong rhythm and pulled.

What happened next was, well just plain annoying, for the next several kilometres the pace behind me seemed to hold, but then about 500 metres from the channel back through the Island I glanced behind and noticed that the gap seemd to have shortened.  I put in thirty strong strokes and glanced around – no difference, he was still there.  By the time we got to the channel through the Island he was only 10 metres behind.  It was one of those two fast guys who had pulled up beside us and he was definitely gunning to put his nose in front of mine before the finish line.

I gambled on putting a big enough gap between me and him during the channel that he might not go for a line sprint, and as I exited the channel I thought I just might have done enough.

I hadn’t.  I saw him coming up beside me and the finish line seemed painfaully, impossibly distant.  It was end game time now, and we both still had a chance to win.  I almost gave up.  I knew this guy was stronger than me, I knew he’d had a break I hadn’t, and I knew he had a faster boat, but I had worked so hard to be where I was and I wanted to hold my position so badly, or if I lost, I wanted to lose with nothing left, no excuses.

So I dug deeper, my arms burned, my wrists felt weak and every stroke just hurt plain and simple.  But the line got closer, and I held.  In fact although he never actually gave up, I felt that moment when he stopped pulling as hard as I did, it was a tiny difference, but I just knew he had sat up ever so slightly, and so it was that I managed to cross the line just ahead of him, seconds, just seconds in front.

We had a good chat after we crossed the line, and it was obvious that he had enjoyed the sprint finish as much as I did, and really as he started behind me, he beat me overall, and with us both been placed well back it really didn’t matter to anyone but us.  That’s why it’s a game and it seems like this time, we both got to win.

A perfect game, and a wonderful checkmate.  I can’t wait to set the pieces back up and start again. 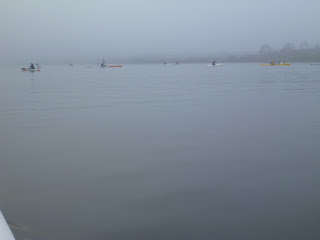