I finally committed to entering the Cape to Cape MTB Ride in Western Australia this coming October, so with less than 100 days to go until the event I decided to start my training … by going for a weekend paddle.

I love being random.

I also predict that in exactly 94 days time I will look back on this decision and think “well getting on a bike might have been a bit better idea, huh, Mr love being random man?”

Sloping island is a small island just off Lime Bay on the Tasman Peninsula.  It’s one of those places I’ve always meant to go to, but never actually got to, so when I saw there was a club trip going out there for the weekend, I thought I’d tag along.

We arranged to meet in Sorell on Saturday morning, but three of us (yes, including me) went to the wrong coffee shop (perchance distracted by the Oomph coffee sign?) but it all worked out, we all got to the same cafe eventually, and the rest of the group made plans for the day as I worried about the effect of three coffees on my bladder with several hours of paddling ahead of me  …

Due to the size of the group, we’d agreed to split into two, and our group headed off first from the boat ramp at Gypsie Bay just around from Primose Sands.  We initially set off towards  the Isle of Caves for a bit of a circumnavigation and play in the kelp. before continuing on towards Sloping Island. 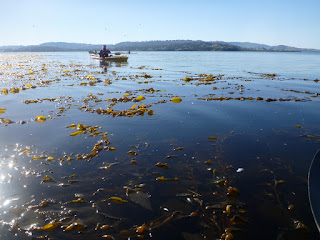 It was kind of nice to be paddling with a group for a change, and after initially heading off up front by myself to the Isle of Caves, I throttled back for this second crossing and took the time to get to know a bit more about the other paddlers in my group (Jill, Jim, Kevin & Sylvia).

The two groups split off as we approached the island, and after being unable to find the “beach just before the cliffs” landing point, our group pulled onto a rocky ledge for lunch and to see if we could find the nights campsite.  It was a beautiful sunny day, though not overly warm with Mt Wellington in the background covered in snow, and it was just lovely rock hopping around the shoreline, exploring the penguin rockery and snapping off some pictures to see what my camera could do. 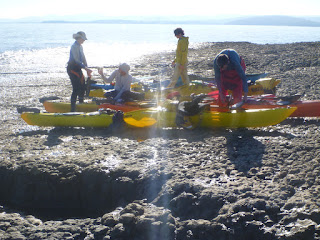 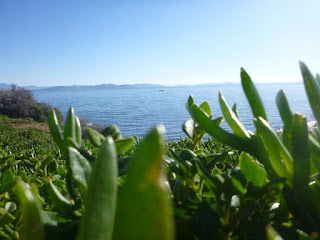 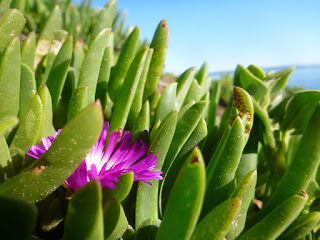 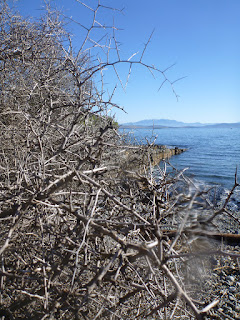 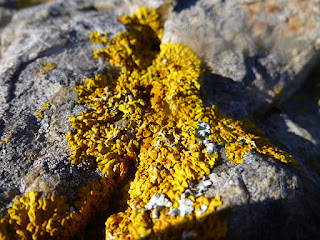 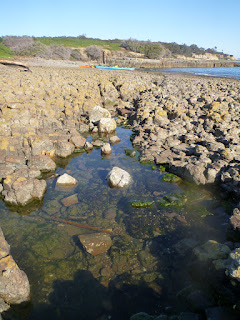 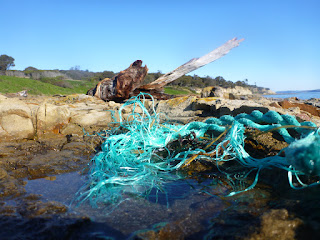 After eating and mucking around for a while we set off, just as the other group came into view (we’d covered about 10% of the island whilst they’d got all the way around) and we quickly ascertained that the beach had washed away in the recent storm.  Four of us decided to still head off and circumnavigate the island, whilst Jill who was feeling a bit under the weather went into the camp with the other group.

The paddle around the Island was very pleasant, particularly the southern side which was very green, and the eastern side was also quite fun as I paddled along within 4 or 5 metres of the shore ducking in and out the little bays.  We saw a bull seal and a mother and calf seal out on a nearby reef., and the whole circuit seemed to just fly by.

The tents were pretty spread out to fit us all into the site and as the last to arrive I ended up at a spot right out the back.  I went for a wander once I got my tent up and enjoyed snapping some more photos in the light of the setting sun before returning to camp for tales, arguments and cooking around the campfire that night. 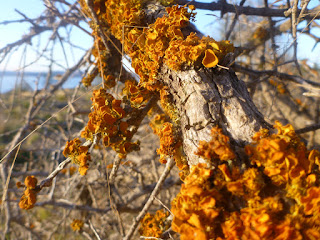 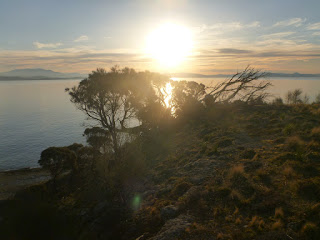 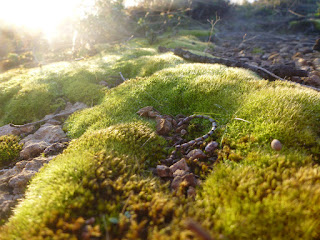 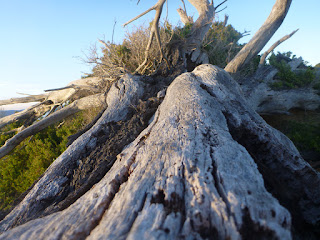 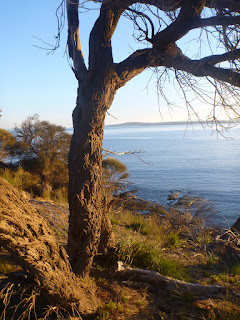 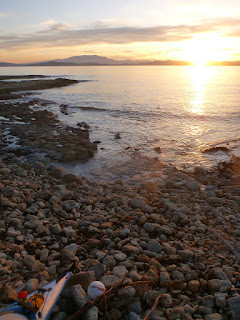 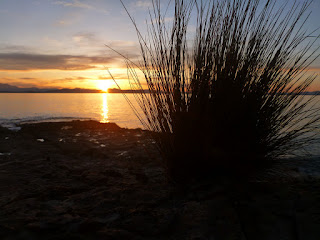 The next morning, after a lazy breakfast, we headed over to Green Head via Hog Island.  Most of the group either headed straight back to Gypsie Bay from Hog Island or Green Head, but three of us (Jim, Sylvia and I) had a good play along the bottom of the cliffs and continued about half way around to Lime Bay, before ourselves heading off in pursuit of the others. 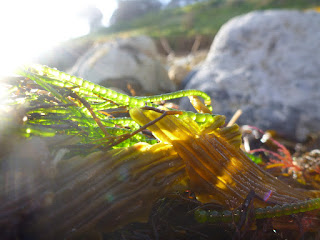 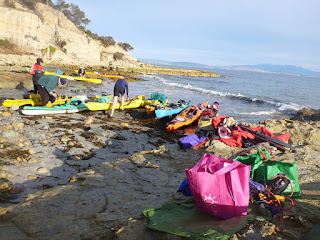 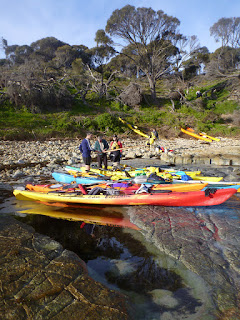 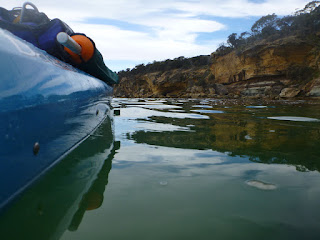 All up, it was a pretty easy two days, with each days paddle only 10-15kms in length, and to be honest Sloping Island isn’t a place with enough draw-cards to pull me back there anytime in the near future given all the other places I have yet to explore, but that said I’m really glad I went along as the conversation was good, and it was just really nice to get outside for a weekend and explore … now what was it again – 94 days to some bike race?