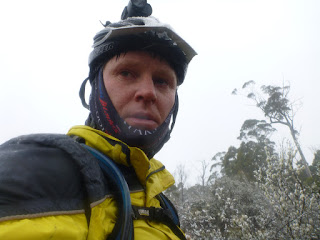 I had plans this weekend to head up to laughing jack lagoon to explore the nearby trails, but the weather had other plans, the roads were closed by wild weather and snow, and Saturday was spent inside instead.

Sunday morning, I opened the curtains to see more fresh snow falling on my front lawn.  I found myself torn between its quiet serene beauty and the frustration of another day locked inside.

I was about to turn away when a gust of wind came through making the snow dance in all directions.  But this gust was just a forerunner of  a strong wind behind it, and suddenly the trees were stirred to anger and the snow fall was suddenly coming in sideways.  I laughed, and I knew that laugh, I taught it to myself to overcome fear, it was my version of a berserkers laugh – it was time to go play.

I grabbed all my cycling gear, threw the bike in the back of the car, grabbed a coffee to go and hit the road.  Snug Tiers seemed like as good as place as any to go play. 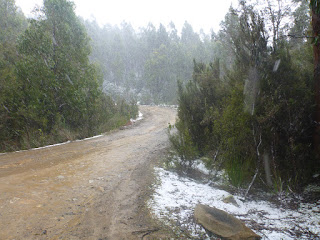 As I got towards the top of Van Morey Rd, the snow started falling lightly around me, so I pulled off in a lower car park than I usually stop at and pulled out the bike, got into my gear (15 minutes later …) and started chugging up the steep climb onto the plateau. 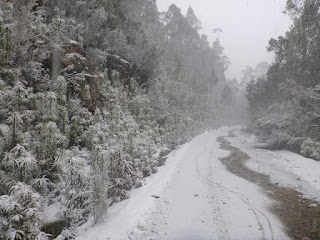 The snow fell thickly, but in my new ground effect inferno socks, double layered thermals and the warmth generated by the steep climb, I felt warm and toasty.  In fact I felt good.  I felt like I’d thrown off the shackles of those hiding behind the defences of their own walls, I felt energised, I felt alive.

A few four wheel drives went past, their drivers and passengers sheltered from the falling snow, but I still felt a connection with them as they too had come here to play in the snow.

Despite the positives, it was a relief to get up to the top car park (yes a bit of pushing was involved, well a lot of pushing) and start heading along the flatter sections of the track out towards the top of Pelverata Falls.  There was a new sign at the start of the park, which made it clear that you could no longer exit from the Cygnet end of the track (darn), but that wouldn’t affect my plans today. 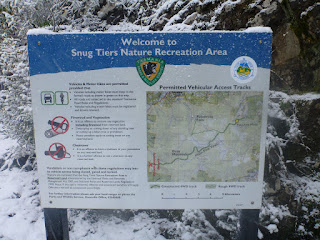 The ride in was superb.  I navigated my way around big huge puddles which stretched from one side of the track to the other, and chugged up and skittered down the undulations of the track.  I had brought my new contour video camera and my new GPS enabled Panasonic camera with me, so I was taking lots of stops as I took pictures and trialled different ways of using my camera (at least that’s my excuse). 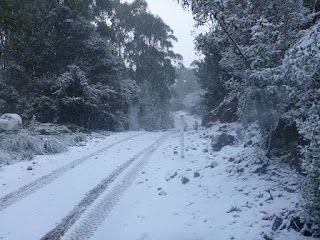 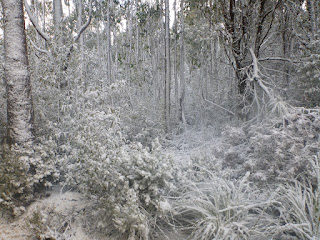 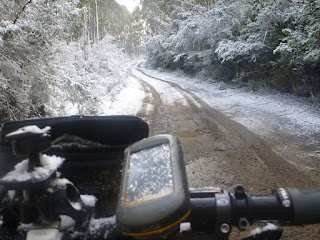 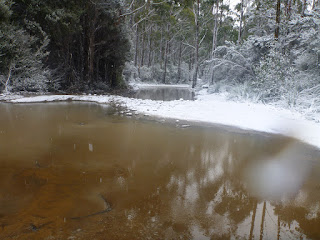 I got to the Main track turnoff and the vehicles that were travelling behind me (the one’s I’d overtaken – go bike power!!!!) turned off leaving me on my own as I skimmed down to the old sawmill site, across a river and then back up onto the plateau.  The last section past the old sawmill site is the hardest, especially in winter and I found myself pushing through thick snow and mud for long sections before finally getting to the junction to the falls. 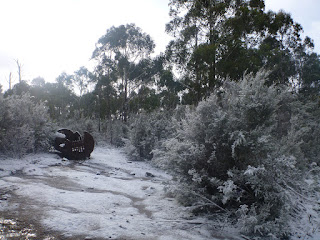 Last time I came through here with C  this last section was a menace with many of the puddles swallowing us whole.  This time however, everything was cruisy and I found myself cycling along, whistling to myself, content that this was where I was supposed to be right here, right now.  I started to get the attraction of “winter riding in Alaska” that Jill Homer is always blogging about. 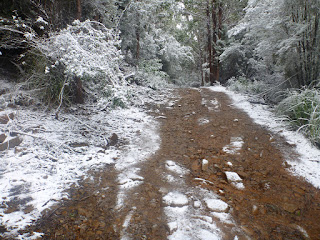 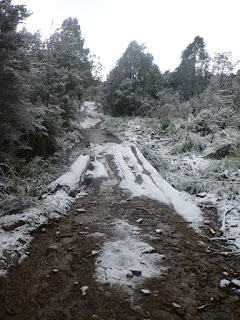 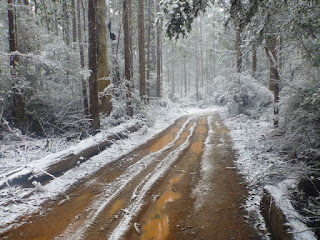 I emerged out into the “car park” above the falls just as blizzard like conditions hit, so I only ended up hanging around for 10 minutes snapping off some pictures before jumping back on the bike and beginning to retrace my steps.  Of course, just as I re-entered the bush, the snow played itself out and I found myself again cycling along in pleasant conditions. 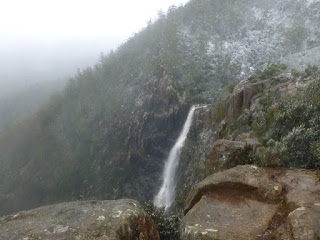 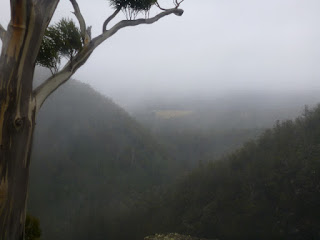 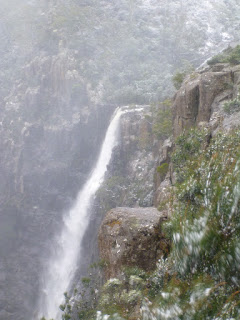 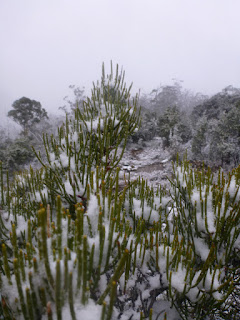 I took a couple of detours on the way back to explore a few side tracks, and I’m pretty sure that there is a track that cuts off from above the old sawmill site to the Grey Mountain trail which definitely needs exploring, but with all of the heavy snow it was pretty much impossible today.  I headed a kilometer or so out towards Gray Mountain, but blizzard like conditions came in again, and by this stage I had wet gloves and feet and my knee was starting to ache a bit from all of the slips and slides so I decided to head back to the car, where I discovered that I hadn’t parked low enough.  it was covered in about 10cms of snow. 🙂 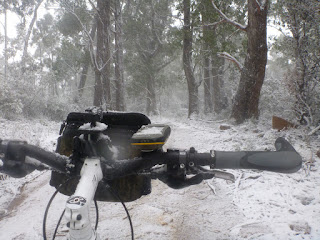 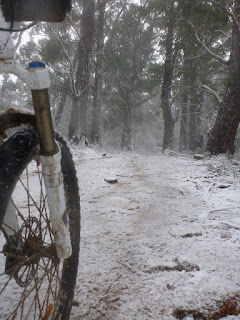 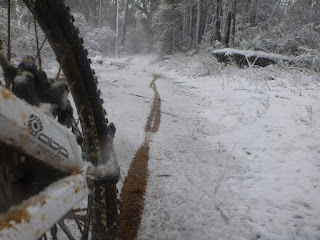 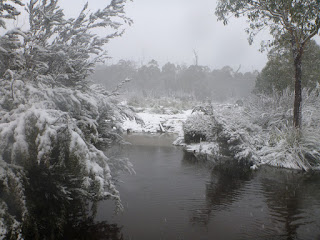 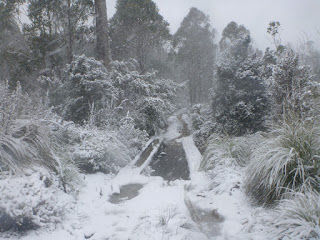 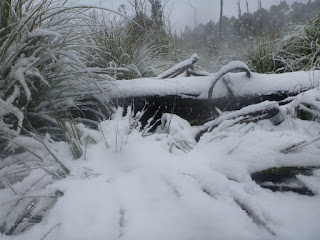 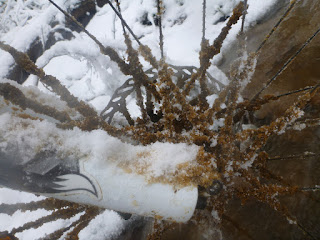 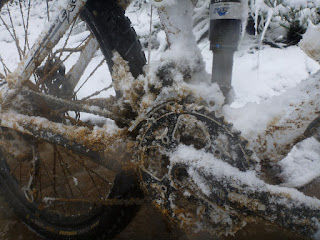 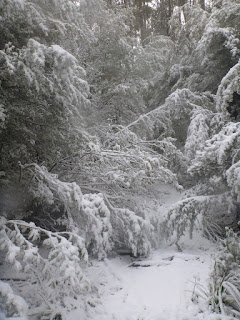 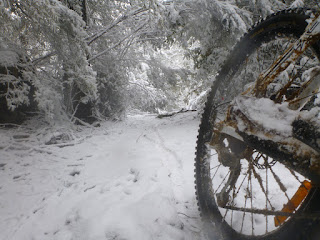 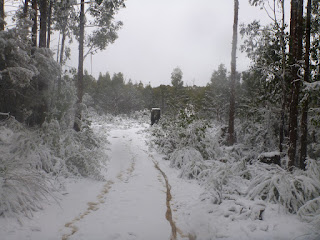 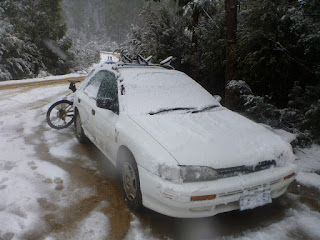 All up, I was out for about three and a half hours, and I just have to get back out there again.  I can’t let winter cage me inside.  I’m pretty happy with my new Panasonic camera, although the video footage from the contour camera had a steeper learning curve than I’d hoped.  Mounting it on the handlebars didn’t work as the footage was rather shaky, but the footage from when I mounted it on my helmet tended to shoot too low, so I’ll need to adjust that.  Also, the battery went flat after about 2 hours which limits use, though of course this might be the cold conditions.