Finally, after meaning to and wanting to for several weeks, today I got around to getting myself organised enough to get down to Next level Kayaking’s free Wednesday night paddle training session. 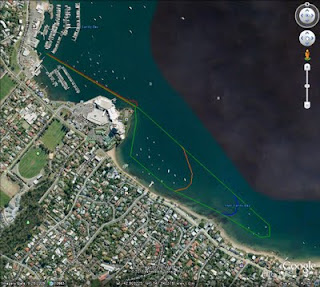 To achieve this was actually quite a committment: not only did I have to remember to pack all my paddling gear, but in doing this I realised there was no way I could get my PFD (life jacket) into either my panniers or a backpack, so I ended up cycling to work wearing it under my (unzipped) jacket.  God knows what all those car commuters thought this morning when they saw some cyclist heading to work on an electric bike wearing a life jacket.  Actually, I probably don’t want to know.  Thank God I wear a winter face mask so no one can recognise me.

The night’s exercises were a series of shortening paddle sprint circuits (see map above) with the first intended to be about a 20 minutes paddle, then 15 minute, then 10 minute followed by a final out and back 5 minute super sprint.

I was in the first group of four that headed off, and it was immediately apparent that there were two paddlers who were 10-15% better and faster than me, and one guy who was a way off the three of us.  I did the only (unhonourable) thing that could be done in this circumstance … I jumped onto the wake of one of the faster paddlers and held on for grim death.

In short, I was in a chase and I loved it.  For the whole first lap, all I could do was hold on.  The girl I was behind was appropriately decked out in a yellow canoe and kag and I just did everything I could to hold onto her tail.  She accelerated several times, and it was touch and go, but I held.  I did have the good grace not to sprint past her at the end having sat on her tail the whole way around.

We headed out again before one of our four had even got back, and twilight had turned into dusk reducing visibility on the water to shadows and lights.  This time I found myself in the front, with the girl in yellow sitting on my tail for the start.  However as I tired she came up beside me and we had to help each other figure out where we were supposed to be going in the dark.

I got a better turn around at the half way mark being on the inside of the turn and as we hit the wind and waves my ability to chug out a slower, deeper, stronger stroke actually gave me a break and I found her on my tail again.  I surged a couple of times to no avail – I just don’t have the acceleration to drop someone, but then after settling into my stroke and concentrating on building the depth and strength of my cadence I found I had a metre gap, then two … just as we came back past Wrest Point Casino another guy from a faster group came past, and I dug deeper, and tried to stay with him.  I held his pace, so he accelerated, I accelerated, he surged, I surged … he continued, I blew up, but fortunately it was just 50 metres from the finish line so I was able to glide gracefully over the line in the dark and not look too bad.

Problem was the two minute call was already out for the next sprint and I could barely lift my arms.  Before I knew it we were off again, and I unashamedly sat on yellow girl’s tail the whole way out and I struggled to stay there.  Just after the turnaround, another boat came past again and he was only going 5-10% faster than us, and so of course I figured “My arms aren’t that bad … I can do it”, I jumped from yellow girl’s tail to the new guys tail and lifted my cadence to stay on mystery man’s tail (by now it was completely dark).  I managed to stick with him all the way to the end.  I think the girl in yellow also jumped onto my tail, but to be honest I don’t know if she did, and if she did, if she stayed there.

We crossed pretty much side by side at the finish, though I may have got over by a few inches, but I think I may have been trying slightly harder as well.

That was it. We had lost about half the group over the four loops, several leaving due to other committments or concerns over the dark.  I paddled way harder than I would have if by myself and my upper body felt the workout.  As I got changed out of my cold, wet clothes back into my cycling gear ready for the ride home I had a smile on my face bigger than any winning margin over the girl in yellow.

No doubt that in a one on one race she’d drop me everytime, but who cares … I just love the chase.