In hindsight, I was sent enough ‘hints’ about what was to come that maybe I should have considered some other ways to spend my Sunday, but always the optimist I headed off blissfully ignorant that 2 hour and 43 minutes later, well I’d look something like this: 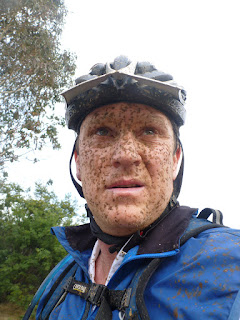 … and if you’re wondering, yes, the rest of me if just as muddy, if not muddier.

The first, and not very subtle, ‘hint’ I had of what was to come was on a Saturday morning exploration down in the Coningham Reserve, 25 minutes south of Hobart.  I spent a wonderful few hours exploring the 4WD trails and firebreaks of this reserve before heading up to join the family for lunch, and as I was pushing my way up towards the top of the reserve, I paused to take a photo, only to have some lady come running by me from behind.  I’d been overtaken by a runner!!! 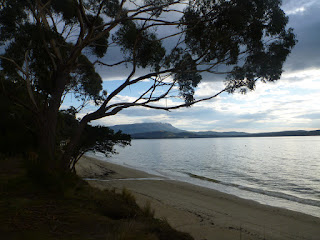 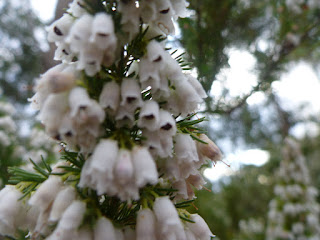 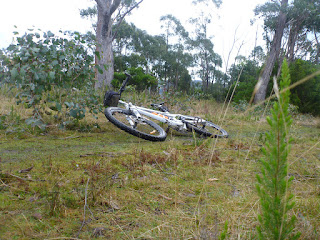 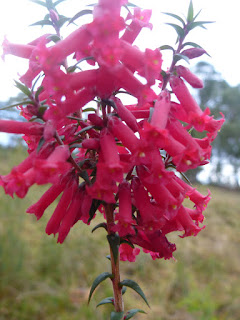 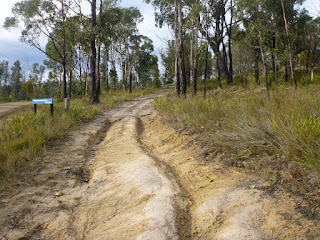 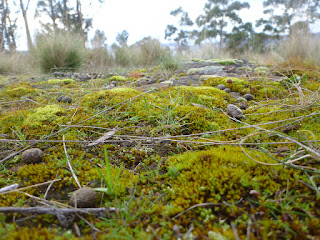 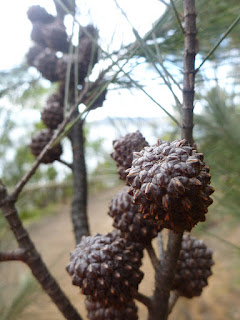 I managed to sort of, kind of justify this to myself:  I was just cruising around, I was heading up a steep hill, I wasn’t racing, but the fact remained – I’d just been overtaken by a runner.  To add insult to injury, I then failed to take a required turn and managed to head off in the wrong direction for half a kilometre.  The lady of course had gone the correct way, grumble, mumble, grumble.

But wait there’s more – 45 minutes later, get this, she lapped me.  I kid you not, the same lady came running past me a second time.  Please, shoot me now.

So there it was staring me in the face: I’ve lost so much fitness over the past five months that I’m getting lapped by people on foot.  How many days was it to the Cape to Cape race?

After, a wonderful lunch, I headed up to the Peter Murrell Reserve to explore the trails there, and only ended up getting back to my car after dark.  I did overtake an 8 year old on his bike in the reserve, and I’m counting that.  I did have the grace not to go back and overtake him a second time, but only because his parents looked at me strangely as I went past taking the victory salute the first time around.

All up, I clocked up about 35km and 4 and a half hours on the bike which I was pretty happy about seeing I had pretty much written the day off as a loss.  Maybe it was the euphoria of time on bike that made me overlook that fitness warning that was screaming out at me.

Sunday morning and I was up early for a three hour drive north.  Lady GaGa slammed me awake about 20 minutes into the drive (I’m finding I am in a stupor until the right music comes along to create my mood for the day), and this time it was Born this Way:

Except I wasn’t (on the right track). Setting a theme for the day, I confidently blew past the turn off to Hagley continuing on to Westbury, where I took the time to actually look at the map and realised that I was supposed to turn off to Four Springs back at Hagley.
That was hint number two – I got lost on the way to an orienteering event. Hello?!? Anyone listening?
Blissfully unaware of what was about to come, I entered the long event.  Here’s a hint of how I went.  The optimal course was 24km and the winning time should have been less than 90 minutes.  Here’s my GPS results just after crossing the finish line: 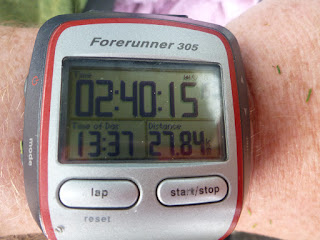 You will notice my time was 2hrs and 40 minutes, nearly double the expected winning time, and I cycled nearly an extra 4 kilometres.  let me just give you a glimpse into what went wrong in this race.

Firstly I took off from the start line, headed out towards control number one, thought I spotted it and headed in only to find it wasn’t my control.  A quick check and I realised I’d completely missed a turn … I’d ridden a kilometre out of the way and clocked into the last control on the course.  F*#K!, oh well at least I knew where it was now for the way back.

After (correctly) bagging control one, I took yet another wrong turn and found myself at control 4, another kilometre of backtracking, another wrong turn and finally I bagged control number 2.
Consoling myself with the fact that I was finally getting into the map and not much else could go wrong, I took off towards control number three.  Five metres down the track my map board fell off my bike.  Now for those who don’t MTB orieenteer, the key to competing is a special map board mounted on the front of the bike to hold the map where you can always see it to navigaet by.  The map board can be turned so the map is always poiting in the direction you are facing, and of course it keeps the map dry.  I had 23kms to go and no map board.  Yay.

Not to be detered, I threw the board at a junction where I could come back and retrieve it later and set off with map in hand.  I could till do this.  Things had to get better from here.

Ten minutes later it started to rain and my map turned to mush.
I had to carry it intermittently between my mouth (during the technical sections) and my hand where it got mashed against the handlebars. By about control 8 it was unreadable.  Seriously this is my map, or at least what is left of it: 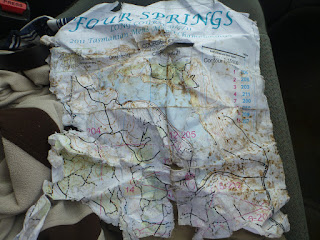 It’s hard to tell, but there about a third of the map is missing.
Fortunately, at about control 11 three guys who were riding together came up behind me and so I put on my most desperate, downtrodden face (not hard as this was the same one I had had on for the last hour) and asked them if I could steal one of their maps, fortunately, they took pity on me and I had a brand new map in my hand and it was in a plastic bag.  Oh joy.
I still managed to take many, many, many more wrong turns.  I took the long way into 12 because I thought there was a cut over track which didn’t exist, completely headed down the wrong track towards 13, and then again at 14 I managed to go completely the wrong way for about a kilometre (my best effort during the whole race).  The problem was that without a map board I was either going from memory, or because I was holding the map in my hand, I was making mistakes because I couldn’t follow the map.  My last mistake was because I didn’t notice that my thumb, which was supposed to be marking where I was on the map, had slipped going over a jump causing me to turn left one junction too early.

It was such a relief to roll over the finish line.  Usually an orienteering event is a bit like life, you take a few bad turns, you lose a bit of time, but overall if you keep going, then you tend to make it back somewhere else later on.  But, not this time.  This time a combination of my terrible fitness and not having orieteered for about a year just left me well – last. 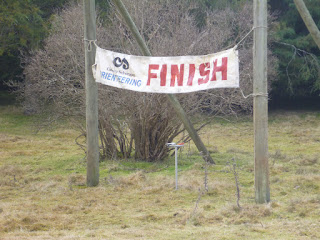 Despite all this, it was still a good day out, and I got to catch up with a few people I hadn’t seen for a while before turning around and driving the three hours back down to Hobart.

What it has made me aware of though it that with it now being less than 90 days to the Cape to Cape MTB Race, I’ve got a lot of fitness to gain.  A lot of a lot.  To be honest, I’m in trouble.

Soooo… Bring on next weekend, because like the Lady says, this is the way I’m meant to be … I was Born this Way.