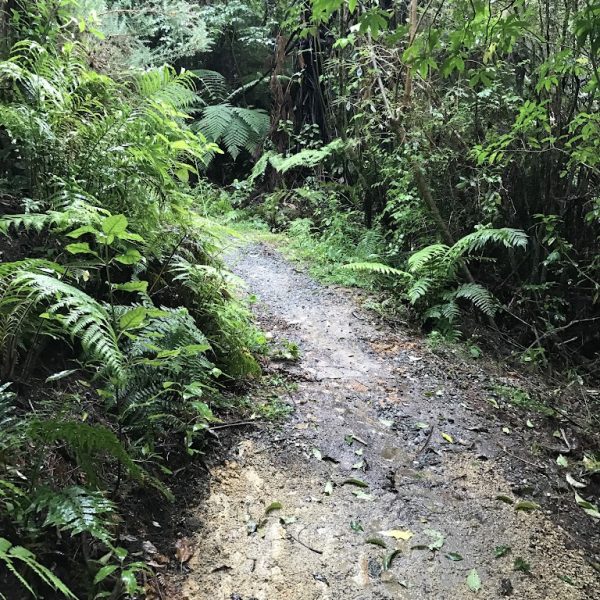 I sometimes think I must walk around with a big sign on my back that says “Come on God, give me your best shot, I can take it …”  (written in invisible ink that only the Big G can read obviously). 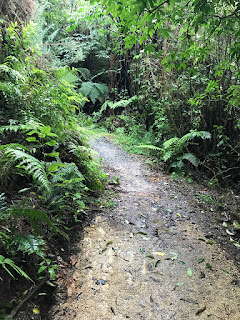 It’s like my life (and here you have to accept that the whole universe has been constructed to revolve around me) is a series of unplanned disasters.
I can see the headlines in my mind now:
Press Release: “The Rambler plans a rail/bike trip around South Island New Zealand “
Newspaper Headlines: “Earthquake destroys rail lines indefinitely“
===============
Press Release (Updated): “Rambler – un-deterred by earthquake – plans MTB holiday in New Zealand.“
News Headline: “New Christchurch mountain bike park burns to the ground – closed indefinitely“
===============
Plus let’s not forget:
News Headline: “Rambler’s bike frame snaps in freak incident – required parts should be available in as little as 3 to 6 months says Giant rep“
I should really get Velocipede Monthly to see if they’ll do a cover page story on my mis-adventures.
But I point out the above for a reason: I feel that any trip should be an adventure.  A balance of planned and unplanned events that together make a story.
And that story then is my life.
Sure, I’m envious, and perhaps even feel like I’m missing out on something, when I read blogs like Cath’s who always seems so organised and able to cram so much into everything she (and her family) does.
But I also understand that’s not my type of story.  My stories always start with a blank screen, a tangled collection of ideas, and me not knowing what words will actually come out until I hit the next key on the keyboard.
This story started the Friday before I flew out to New Zealand, having just driven back down from my week in Devonport, I got to work and I started to email and text Cath (with increasing urgency) to see if she’s around somewhere and if I can grab the all important bike bag I was lending from her to take my new (and unplanned) purchase across to New Zealand … 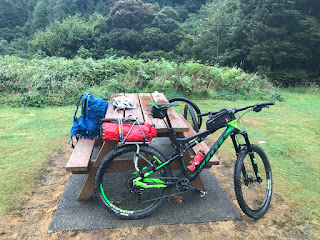 So maybe my story actually started a few weeks before when the bike parts that Nic at McBains Cycles was going above and beyond to help me get in from England for my broken Giant Trance suddenly fell through and I found myself with airline tickets, hire car and old ghost road bookings but no bike.
Not really knowing what sort of bike I wanted (so many options!!!) but knowing that I was limited by the fact that I was flying out to New Zealand in less than ten days, I wandered down to AvanatiPlus in Sandy Bay to see if they had a demo Scott Genius that I could ride.
Turns out they didn’t, but they could get hold of the model (720) in the size I wanted as an ex-demo bike from Launceston and they could get it to Hobart the next night, and as an ex-demo bike it came slightly closer to what I could actually afford (it was only double the price).
So, I bought it.
It now occurs to me that the total invested time in that purchase was under 20 minutes.

This is particularly fascinating to me and my interest in behavioural economics, as I now realise that I spent more time in the Westport Supermarket trying to decide which one of the fifty muesli brands to buy for the Old Ghost Road trip than I did choosing my bike.

Huh.  That’s another good story.
But, getting back into the main flow of this story, hopefully you now get that because I bought a new (and for me very expensive) bike, I wanted to cart it to New Zealand in something slightly better than my Ground Effect Tardis Bag, and hence why my disorganised chaos flowed  into Cath’s life as my usual last minute rush to get everything done left her juggling work appointments, kid drop offs … and hauling a large bag around in her car to give to me at a time that was convenient to me led to her having to walk out of a work meeting to deliver said bag into my hands.
But it worked out (for me) and the next morning I got my bike into the bag no problems (I love the EVOC bag!), and eventually I got to Christchurch, and to my hotel (tip for the unwary – the Sudima Airport hotel may only be 500 metres walk from the airport, but it’s hard to figure out how to walk there – I reckon I ended up walking closer to a kilometre and a half).
I woke up the next morning (after just a few hours sleep) went down to breakfast and realised with a kind of pleasant concern that I had no idea at all what I was going to do for the next two days until I was to meet up with Tyrone at Lyell.  My initial idea had been to put the bike together and spend today riding around the new Christchurch MTB Park, but as noted earlier, that idea had come crashing down in the recent bushfires.
And this is how holidays like mine work: I got back to my room and flicked on the TV and some tourist promo advert thing came on about Hamner Springs, and I thought to myself – “that place looks cool, where is it?” and after checking on  google maps, it turns out that it was on the way to where I was going on the West Coast, so with no better plans or ideas, I jumped in my car and drove to Hamner Springs.
I got there around lunch and had the most amazing hamburger and chips ever …

Well, the best ever to that point – I was to have a series of hamburgers over the next week which were even better – who knew that New Zealanders know how to do bloody good hamburgers?
So, I have lunch and not really knowing what to do next, I wander down the street to use the toilets.

And on my way to the toilets, I walk past a bike hire shop.

A bike hire shop with a big map of the mountain bike trails in the area.
I jump onto TrailForks, and sure enough there’s a bunch of trails showing on the App, so suddenly the pieces fall together and I have a plan – drive to the trailhead, put the bike together, and spend an hour or so having a bit of a shakedown ride to see that everything is working.
So that’s what I do, unplanned adventure here I come.

I go back to the car, I drive to one of the trailheads (the one that looked like it had a lot of blue trails heading off from it) … and I find a big sign saying “trails temporarily closed due to logging”.

It sounded like it was going to be such a good story didn’t it?
Anyways, somewhat despondent I drove back into town, and decided to go for plan C which was to drive to another trail head which seemed to have lots of easy green trails around it and go for a ride from there.
And that, finally, is what I did, and it turns out they were green trails in both technical difficulty and in appearance … 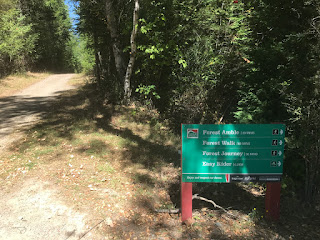 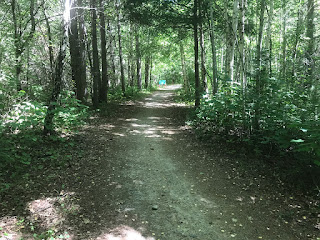 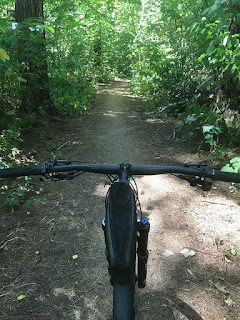 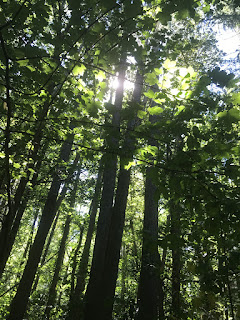 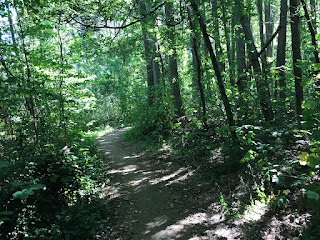 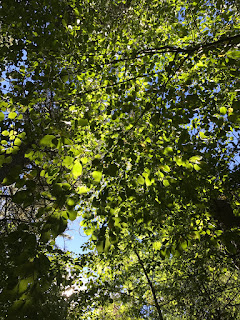 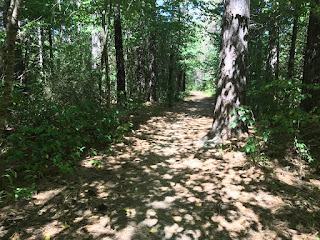 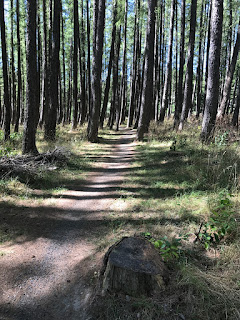 It was very easy riding, but also very pleasant, and to be honest just what I needed – especially as the new bike felt really different to any of my other bikes.
After the ride, I ended up continuing on to the west coast and spent the night in a lovely little motel in Westport allowing me the option of raiding their tea, hot chocolate and coffee supplies for the upcoming trip … 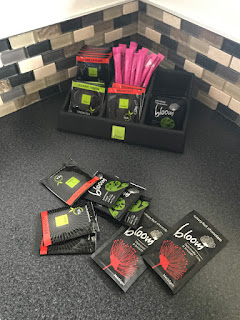 … and a morning to do all the necessary shopping for a three day bike ride (this is where I spent more time choosing a muesli than I did buying my bike).  Fortunately the supermarket in Westport not only sold all the supermarket stuff I needed, they also had dehydrated backpacker dinners and fuel bottles allowing me to do all my shopping in one hit.
With that done, I headed onwards to my destination for the night – Seddonville with a side trip to the Denniston MTB Park which I’d also discovered on TrailForks.
The Denniston MTB Park is up on top of a plateau, and if trailforks is right, the most popular ride is not around the tracks, but straight up the dirt road to the top of a small mountain.

This, I thought, might be telling me something about the quality of the trails, but I wanted to try out my pack-n-ride rack on my new bike, so I put that on, put a bit of weight in it, and then set off for a ride around one of the recommended loops on the trailhead information signs. 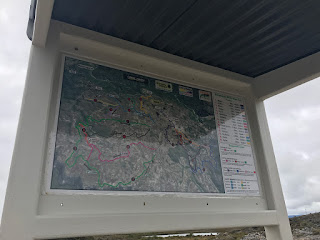 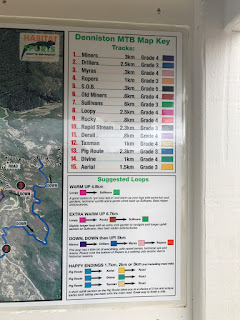 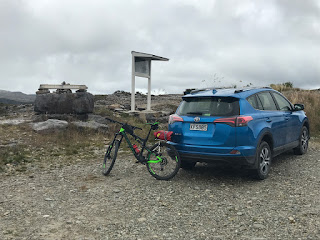 Turns out the loop I went on was all old 4WD tracks, although they still presented some nice technical riding and were plenty rough enough to show me that I hadn’t done the rack up tight enough as it slipped down about an inch on one side, so mission successful.
By which I mean I failed, but at least I knew that before I set off on a three day ride. 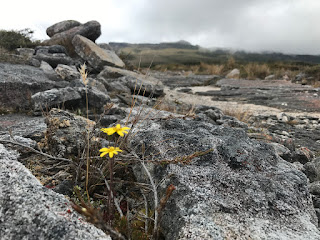 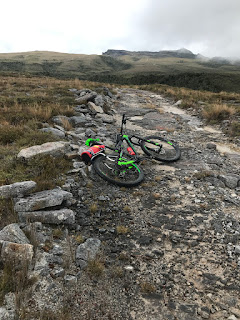 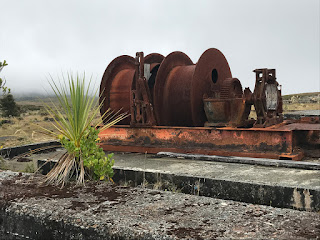 By the time I’d finished the ride, it was getting on towards mid afternoon so I headed back down to Granity to have some lunch at a nice little cafe behind the beach, but instead became lunch for a  million sandflies leaving me with feet and legs which would itch constantly for the next week. 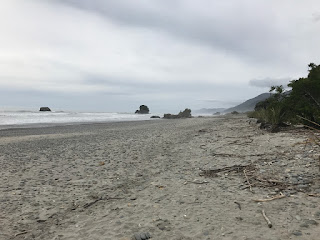 By the time I got to Seddonville, I realise that I had chewed up too much of the day to head up to the limestone caves north of Karamea (another attraction I’d discovered at my motel the night before and decided to go to), so instead I watched a few episodes of Van Helsing and the OA on Netflix (I was very pleased to see my Aussie Netflix worked in New Zealand), ate a pretty average pub meal, and got ready to get on the shuttle to Lyell the next morning to meet up with Tyrone.
And that’s my story (well the first part).

I flew into New Zealand with no real plans of what to do for two days, and still managed to find and ride two mountain bike parks and see all different and new parts of such a beautiful country.

Just like writing this blog, I had ideas of how the story might write itself, but I had no idea what would actually be written until I got to the end.

Sure, Cath’s clan would have visited three theme parks, opened up a hamburger shop and sold it for a huge profit, and probably re-discovered some ancient species of bird long thought extinct, but that’s their story (ed – if you read this Cath take it as a complement).
I’m happy with mine.
I like going around the next corner and not knowing what might be there, even if it means I might miss the junction with a big sign saying “everybody else goes this way“.

That route will just have to remain everybody else’s story.