So Kim, Zara and I went out for a quick dinner at the Foreshore Tavern the other night. 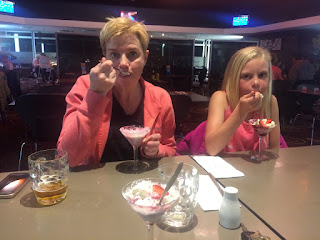 It was pretty busy when we got there, and as I still half wanted to get to a Sea Canoe Club snake handling session later on, Kim quickly went up and put our order in.

While we waited we chuckled with smugness at how clever we were getting our order in early as a very long line started building up at the bar.

We also grimaced a bit as the line stretched up to, and then around, our table leaving us with people standing over us as we waited for our dinner.

Forty minutes later we were still waiting for our entrees.

Then we noticed people that were standing next to our table (ordering their meals well after we had ordered ours) getting their meals.

So, with temperatures rising, we inquired as to the hold up with our meals … and found out that our meal order had been left on the counter all this time.

Firstly the Manager came out, apologised for the error, and then gave us half our money back (followed very soon by our entrees and meals).

That was good enough (in fact it was amazing) in my book, but then after our meals they also brought us out a free desert each (and a good desert) as a further apology.

I wasn’t a big fan of the Foreshore Tavern prior to this, but we had good meals, and most importantly they recognised they had made a mistake, and they over corrected to fix it.

Which brings me to Zap Fitness …

I joined Zap Fitness a few months ago and then almost immediately got asked to act in my bosses job for three months leading to a 7 day a week work life, and then I got the flu, and then hurt my shoulder …

The key thing is – I never actually got into the gym.

But the offer of a free consultation with a personal trainer had apparently vanished and I was encouraged instead to sign up for three sessions for $99.

So, realising that I was blowing money up against the wall and that there was a four week ‘wait’ period to end memberships, I went into the gym (during business hours) to close my membership.

Except there were no staff there.

So, I emailed the gym explaining that I had been into visit to close my membership, but that there was nobody there, and asked them if would they please terminate my membership as of the day I went in.

A week later I had heard nothing, so I called them to check what was happening.

The person I talked to said that there must have been some problem, and to resend the email to the admin@zapfitness.com.au website and she’ll fix it.

So I did that.

And I waited another week, with no response, and then I called again.

This time the person told me that there was no way the above could have happened as I had to go into the gym to cancel my membership (I pointed out that I had) and then after some rather persistent nagging from me asking why exactly it was impossible for me to cancel my membership in writing or over the phone, he said he’d call the gym and see what he could do.

Turns out, according to him, that he could do nothing.

So, I took an early day off work and went into the gym to cancel my membership.

It was at this point that the guy at the gym tried to offer me that free personal training session that hadn’t been available to me before.

To be honest, he pissed me off so I asked exactly why I had to come into the gym to cancel my membership and he explained that (a) they needed to verify it was me cancelling my membership and not someone else (because I can see that happening a lot) and (b) when I hit the green button accepting my membership on the ipad, I had agreed to the terms and conditions which included ending my membership in person in the gym.

Then he explained to me how unfortunate it was that I’d come in today, as they’d just processed the membership payments and so I would be six weeks (three more payments), not the normal two, before they could stop processing my membership …

At that point I just got pissed and stormed out.

Now the thing that really pisses me off about this, is that although I feel pretty confident that under Australian Consumer Law they’re in the wrong in being able to claim that I was bound by terms and conditions that I never read and was never aware of (see exhibit a from their website which would seem to counter their claims of lock in times and agreeing to fine print …) especially as I did go into their place of business to cancel my membership and it was them that failed to have someone there during their advertised working hours to accept my cancellation  …

… but there’s nothing I can do about it.

I’m helpless.  It would cost me more than what it’s worth (a lot more) to hire a lawyer or even lodge a claim in the small claims tribunal to try and prove my rights.

And I think that’s wrong.

What use is Australian Consumer Law protections, if it can’t be used?

So I got really angry for a few days … then I remembered by foreshore desert and got over it.

Still a bit upset at not going to that snake handling session though – I heard it was really good.