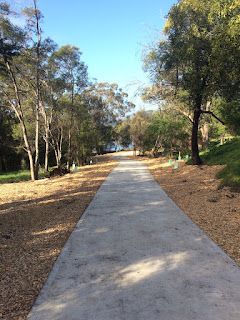 If it helps, you can see the new trail (red section) and the old section (light yellow line) circled in blue in the image below.

This short detour half works in my opinion – it’s less steep, but it’s still got a bit of a grade on it (I still passed some girls on hire bikes pushing them up this hill).  My vote still goes for a waterfront detour to take this horrible section out of the trail.

However, this little detour, plus the fact that Kim told me she was going to do a 30k run along the trail as part of her Auckland Marathon training, got me thinking again about my ‘Goldilocks Loop’.

This is a loop I’ve been thinking about for a long time that would connect together the many little reserves and trails that run through various Clarence reserves allowing you to complete a loop with the foreshore trail (which let’s face it is a nice one way ride, but a bit of a chore if you ride it all the way out and all the way back).

Now, there’s two obvious parts to this loop: The Clarence Foreshore Trail and the Charles Darwin Trail, but tying them and the rest off the trails together without too much road or too many turns – that’s where it gets difficult.

So, when Kim set off on her run last weekend, I set off on my bike at the same time in what would be my first (or maybe second) attempt at bringing together many little exploratory rides into a single loop … 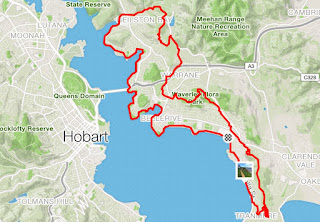 We both started at the Howrah Primary School car park (near the Caltex) with Kim planning a long  out and back along the foreshore trail to Geilston Bay and back, whereas my plan was to head towards Tranmere, and then loop back through the hills to Geilston Bay, hopefully catching Kim somewhere along the Clarence Foreshore Trail on the way back.

There is, in my opinion, basically two ways to get from the Howrah Primary School trail to the Tranmere continuation … a simple ride along Tranmere Road for about 1.2km (a safe, but fairly busy route) or the quieter, but steeper and navigationally more complex option of heading through Mortyn Park climbing via backstreets up to the Minerva Street entrance to Minerva Park which you can then follow back down to Tranmere Road and then back onto the Clarence Foreshore Trail.

Truth is, that nine times out of ten, I’d avoid the climb up to Minerva Park and just head along Tranmere Road, but I feel compelled to connect the parks, so do I put in the one time out of ten option or the nine out of ten option for my goldilocks loop???

Once on the Clarence Foreshore Trail, you just follow it around until you drop out to near Rotuma Park, and it’s a lovely ride. 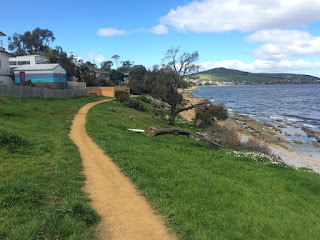 But then you (if you’re me) have a decision – how the heck do you get from this point into Rokeby Hills?

In the spirit of this being a join-the-parks-and-reserves route, I opted for a trundle up through Rotuma Park, but to be honest it was all a bit of unnecessary climbing, because when you get to the road at the top of the park, you just descend back down onto the roads you would have gone up anyway to get to Oceana Drive before ending the climb up the very steep Vitesse Court and into the reserve.

The route got me there, but it wasn’t ‘fun’, but nor are there any other obvious options – at least for an ascent option, other than maybe the route up through the Elinga Play park which involves a lot of pushing.

Once in the reserve I just followed the various trails that exist (lots of informal trail building in these hills) experiencing them in the reverse direction to what I’d normally ride them, and to be honest there’s a reason why I’d normally ride them in the opposite direction (it’s more fun) but with that said there were only a few little sections that I had to push, and overall – I still had fun. 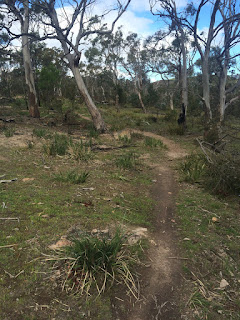 I exited the reserve via Mayfair Court (the way I’d usually come in) and from there coasted down onto the Rokeby Road Cycleway onto Clarence Street, around the Shoreline Shopping centre where I jumped onto the Charles Darwin Trail.

The Charles Darwin trail follows roads to begin with (and has a confusing little unsigned detour behind some houses and through Tilanbi Park) then you jump off onto a little bit of singletrack running beside the highway at the end of Tilanbi Street and start the climb up through Wentworth Park to the water tower (my second water tower for the day) and then the fun run back down towards the northern exit at Lanena Street.

While there is an alternate exit from Wentworth Park on Quarry road, neither of these northern exits put you onto a particularly good path to continue onto another reserve without a lot of street riding.

My option today was to head down to Shoreline, following the Charles Darwin Trail, and then I cut through the bus mall and off onto the small path through the lawns to the council building and then out C R Barnard Drive back to the  Gordons Hills Road.

From there you have to ride up Gordons Hill Road for a few hundred metres and then jumped over onto the concrete cycleway on the other side of the road that runs next to the highway and out towards Flagstaff Gully Road and the Polytechnic.

To be honest, I already knew at this point that this bit of trail wasn’t my goldilocks loop – it was just connecting together trails, it wasn’t fun riding.

Regardless, I was pleased to discover some new trail heading up the creek near the Polytechnic, so I followed that up to Flagstaff Gully Road and then started the long climb up Begona Street to Robin Court and eventually into Pilchers Hill Reserve.

Again, much of this was an uphill grind, and the last pinch from Begona Street to the reserve is particularly unenjoyable, but the real kicker is that because you can’t ride down the single trail in Pilchers Hill (it’s a one way climb) then the descent isn’t that brilliant (it’s good, just not brilliant) and so overall as I rode down and connected back onto the Clarence Foreshore Trail for the return, I was pretty confident that I hadn’t found my goldilock loop this week.

The only good news is that, because of her new shoes, Kim had a blister so I managed to catch her about 600 metres before the cars. 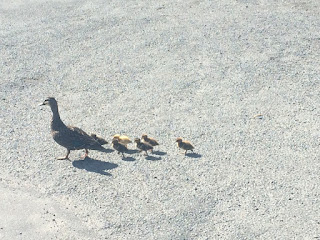 I’ll take that as a win.