Skip to content
I feel I should start this post by noting that it was snowing when I woke up this morning.
Specifically, it was snowing at sea level in Lauderdale on the day we were setting off to hike the three capes track (like many other Tasmanian’s, we were taking advantage of the half price winter rates to check out the walk  –  the one’s that work out really well if the weather is … fine).
By the time we arrived at Port Arthur (slightly stressed due to a late departure) it had stopped snowing and it was hailing instead
Yay.
I also confess that as we were waiting to board the boat, I did find myself wondering if maybe I’d made a slight packing mistake choosing to squeeze in an extra bottle of wine in my backpack instead of my raincoat, leaving me with only my light weight marmot rain jacket and my lightweight winter jacket to keep me warm and dry for the next four days.
Then, just to cap off our introduction to what was supposed to be a lovely scenic boat ride across the bay, followed by a short four kilometre amble to the first hut, due to the strong winds and tide, the boat couldn’t actually pull up onto the beach meaning we had to jump out into the water and wade to shore .. 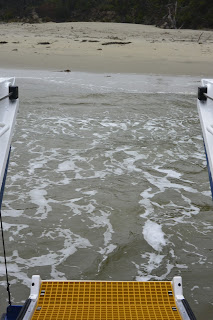 That water was cold, and I say that as a Tasmanian that doesn’t usually feel the cold.

Then, just as we hit the beach it hailed some more.

Then we had a thunderstorm come through.

Don’t think I missed anything there in terms of the winter experience – other than to note that by the time I had made it to the top of the beach, my feet were so cold they hurt and I was definitely thinking that the extra bottle of wine may have been a mistake.

OK, maybe I was thinking his whole stupid walk was a mistake, but lett’s just stick with the wine story.

However, despite these little packing and meteorological misendevours, we survived our beach landing and once we had gotten our shoes back on and our feet warmed up again, all of the little stresses of getting ready and to the start point faded away and it was nice to just wander along and enjoy the simple pleasure of a heavy backpack, easy walking and some nice views as we strolled the four short kilometres to the hut.

OK, that’s what I would have written if this were for some travel magazine.  In truth (between dodging thunderstorms and playing with hail) I spent most of the time puzzling through that odd phenomena that arises from walking a really short day.  Am I the only one that has noticed that really short activity days always seem to take much, much longer than they should?  You know the internal conversation: “Are we there yet?“.  “Nope, we’ve only walked 600 metres“.  “600 metres?!?!?, but we’ve been walking for ages“.

Then two minutes later … “Are we there yet?“

Expectations are a bitch. 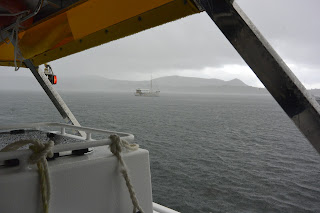 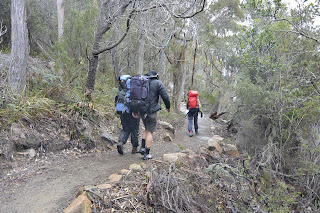 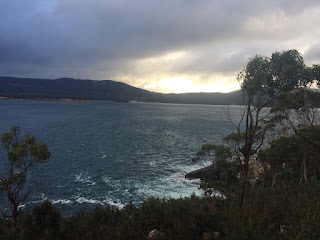 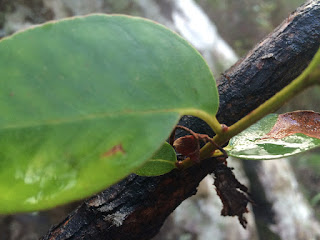 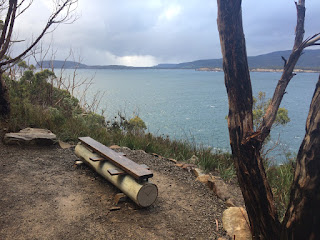 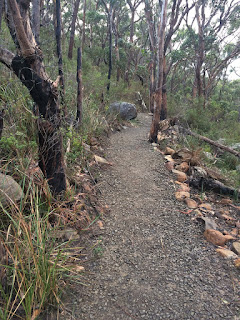 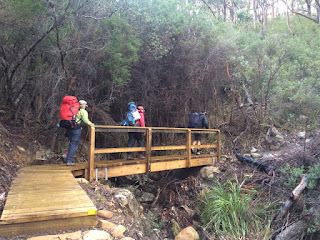 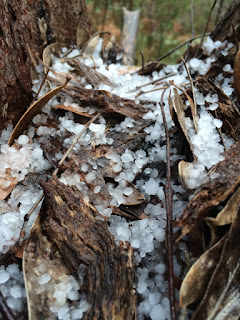 Eventually (like it must have been nearly forty minutes) we emerged over a small crest and were greeted with our first nights accommodation, and it looked impressive … 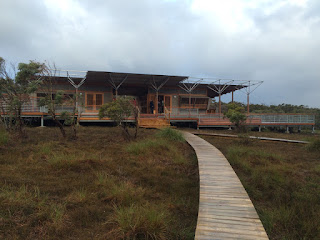 It turned out that there were only 11 people (including the four of us) doing the walk, which meant that couples and individuals could basically break up and take a room each which was kind of nice.  I suspect it’s still nice when there are 48 people coming through, but our small numbers really added to the experience for me.

I also have to say that I was extremely impressed with the whole setup, especially as I sat in the nice warm kitchen, sipping a hot coffee while looking out the window towards Cape Raul as 60km/hr winds buffeted the building.  I couldn’t help but think that this was my kind of camping. 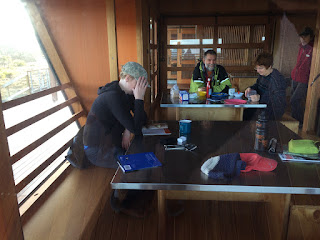 That night, Kim and I had some nice big steaks and veggies with a nice gravy, washed down with red wine for dinner. 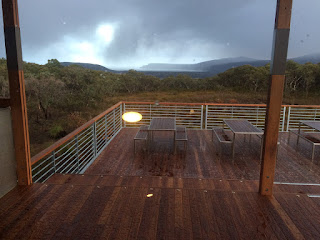 Not bad at all … though I still can’t figure out why short days seem so long.