Little did I know as I set off this morning, to do just this, that not only was I heading towards an epic fail, I was also this close (think of something really close and insert it here) to the ignominy of almost drowning in what was supposed to be an empty lake.

No one’s surprised there, I bet.

But, back to the beginning.

One of the first routes I put up on tassietrails.org was an out and back route from Butlers Gorge to Derwent Bridge alongside Lake King William.  I later got some feedback about a potential low water route which made the ride even more attractive, but had never got back to try it.

I had also scouted out Harbacks Road, on the other side of the lake, on my way back from the West Coast one day and found a perfectly rideable trail that ran all the way down to Guelph Narrows …

This meant that if, and it was a big if, I could get from Butlers Gorge to the other side of Guelph Narrows, then I could circumnavigate the lake.

This seemed like a very rambler type thing to attempt, which is why I found myself looking out over the dam at around 11am this morning, thinking to myself “now how am I going to get across here …“

My Plan  for this trip had been that I’d simply cross over the top of the dam on foot, as I recall having read bushwalking stories of people who had done this in the past, but it was very clear from the security put in place that this was not a legal or desired thing to do … 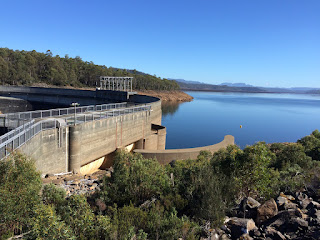 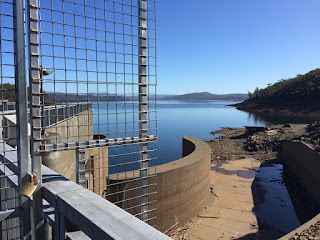 So, I had to settle for the less convenient Plan B – paddle across. 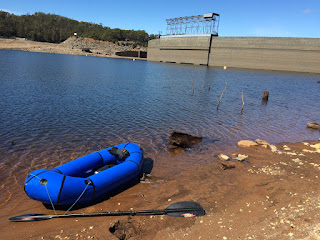 Which is where it all started to go wrong.

I got all my gear together (this was the big try out for the Surly ECR), rode down to the waters edge and inflated the packraft. 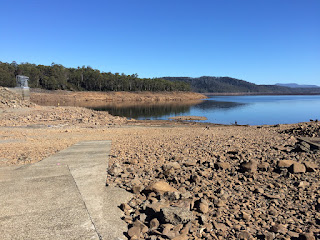 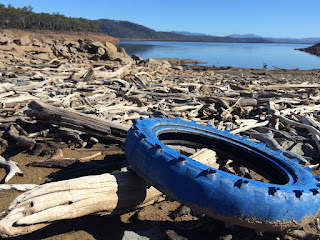 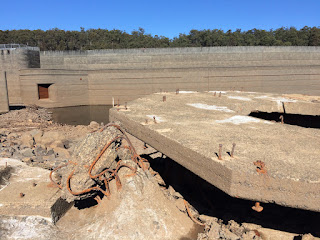 But then, as I finished putting a last few breaths in the raft I heard that ominous sound of escaping air.
That’s not so good.

After a bit of an investigation I found the culprit – the o ring seal around the main valve had several cuts in it which was letting air escape.

Not a problem I thought, this is why I bought an Alpaka repair kit, so I casually opened my emergency repair kit … and of course there was everything in there but a new o ring.

That was a problem.

After a bit more tinkering, I finally managed to get the raft inflated and it didn’t sound like it was releasing air … but I knew that that could change at any second, so after a bit more pondering and with images in my head of my new Surly ECR sinking to the bottom of the dam as my raft sank, I made the hard decision to abandon the bike and just paddle to the other side … for a bit of a look.

After all, I had driven two hours to get here and it seemed a bit of a shame to go home straight away.

Figuring I was alone and that I would never be out of sight, I just left the Surly where it was and jumped in the raft to paddle to the other side.

About 40 metres from shore I noticed that the raft was definitely feeling a bit softer than when I launched.

About 100 metres from shore, I realised the raft was definitely soft.  I started paddling a bit faster.

About halfway across the raft had a horrible bend in the middle where I was sitting which indicated that it seemed to be deflating faster than I was paddling.  I really started paddling at top speed with just a little bit of panic setting in.

Twenty metres from shore, water was just below the top of the raft and I was starting to feel like I was in one of those cartons where the raft shrinks around you as it deflates and you go slower and slower and slower as it loses all of its firmness.

But I made it, managing to touch shore and get out before the water came in over the side.

I was pleased about this, as the idea of Newspaper headlines reading “Man drowns in empty lake” was not how I saw myself exiting this world.

As I lifted my rather sad looking raft out of the water and looked back across to my car, I realised I had a serious problem with getting back home … 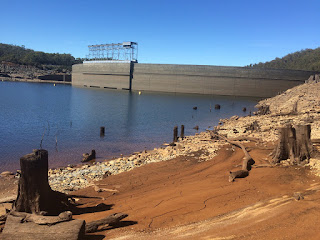 So I did what I think any reasonable person would do in this situation … I figured I’d cross that bridge when I came to it, and wandered off to explore the area. 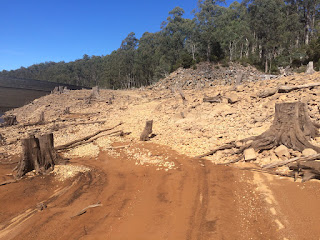 Now you have to remember that I came up here to go for a ride, so all I was wearing was my clip in cycling shoes, my knicks and a lycra top.  I wasn’t really equipped for a long walk, so I just thought I’d wander up to the other side of the dam to check that out … 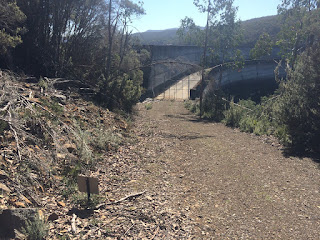 But then, when I got there, I found this excellent track heading up the hill (the one I’d hoped to cycle to the narrows) so I thought “what harm would there be in just following that for a few hundred metres?”
So I did … 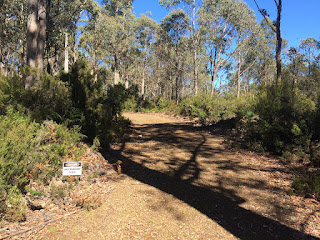 And soon found myself at the top of a steep little climb next to some sort of communication tower. 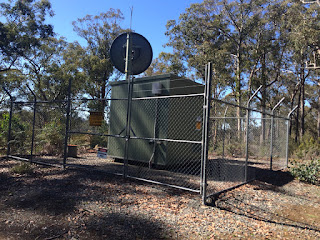 Now despite the non-fun experience of walking in cycling shoes, it was a beautiful day and it really was a lovely area … and hey, what were the chances of anyone stealing my stuff? 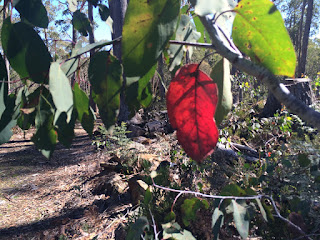 … so I thought … “maybe I’ll just wander down that side track I saw – the one that I think I saw on Google Earth that seems to head about half way to the narrows then disappears”  (OK, so I didn’t exactly think all of that, but just thought I’d put that in there in case anyone is reading this after seeing the same trail on google earth and is wondering if that’s the one I followed).
So off I wandered … 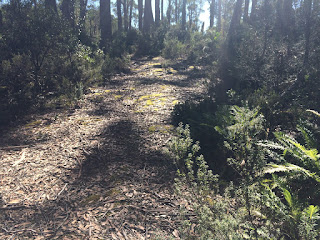 And found myself heading down a beautiful old track imagining myself on the Surly enjoying what might have been a very rare circumnavigation of the lake.
The track did however peter out after about 600 metres and became a bit of a scratchy affair for the last 50 metres before emerging out on the side of a very dry lake king william … 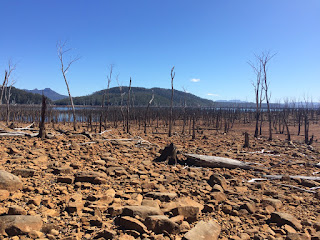 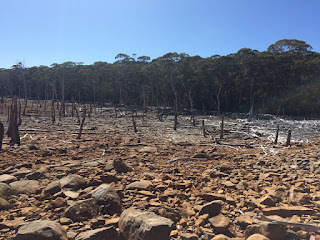 Problem was … the track seemed to continue on, and well, I’d come this far and it would be a lot of effort to come back here again …  so off I went to see where the track would take me. 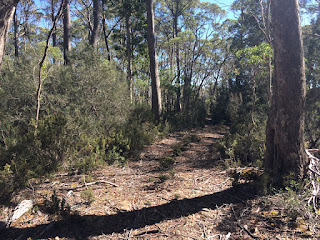 It was actually quite a good track again (a few downed trees, but nothing serious) as it headed over another smaller headland and then dropped me back alongside the lake another kilometre along, but then it turned left along the lake and it started getting a bit more overgrown … 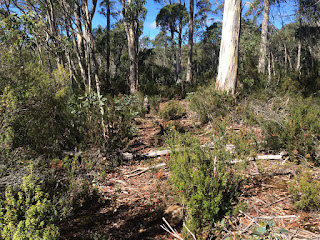 And then it became a full on scrub bash … 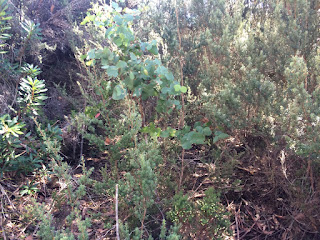 But I persisted for another 30 minutes or so and while there were bad patches, in the main, it was walkable, even in the gear I was wearing.
It would not however have been fun on a bike, possible, but not fun.
It took me over 30 minutes to walk the next kilometre and realising that I was still probably at least an hour or so away from getting to the narrows at this pace (albeit that I didn’t really know as I had no maps, no phone service, and I couldn’t really locate where I was in the bush) I decided to turn back.
I had also gone a little bit further than I’d planned and it was playing on my mind a bit that I did just leave my bike lying in plain view on one side of the lake and my packraft on the other side of the lake just sitting there waiting for someone to drive past and think “hey, I’ll take those”.
I decided to take a short cut across the lake on the way back, and that was rather awesome … 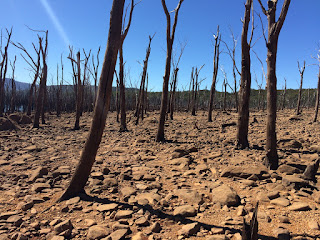 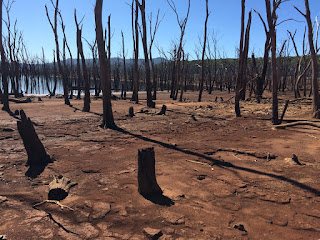 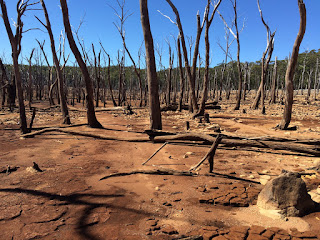 … albeit that there were moments as I was jumping off logs onto muddy sections that there was this little voice in my head saying “these could be really deep” … but they weren’t and so it was just cool.
I seemed to get back to the dam in no time at all, and as you do, after scrub bashing my way up from my packraft to the dam, I now found the path that ran all the way down to my raft, making my return much, much easier. 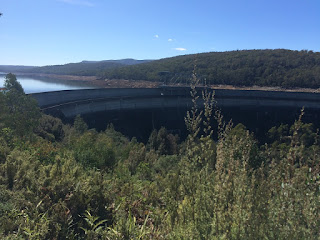 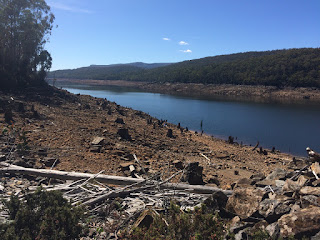 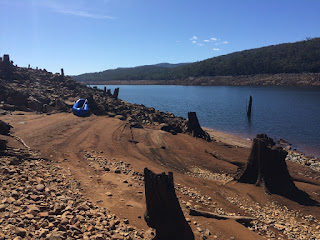 Now here’s the strange thing.
As the packraft had been sitting in the sun, the air inside had warmed up and it had gone from a floppy mess to being reinflated, and so without really thinking about it, I just jumped in the raft and started paddling across to my car …
As my facebook image says … “I’m not a stupid person …. I just do stupid things”.
About half way across, I realised that my raft hadn’t magically healed itself and it was, again, leaking air, but the leak was a lot slower this time and I easily made it across with around 80% of the air still in the raft.  The physics of all that I still haven’t figured out.
Anyways, that was my very failed attempt at circumnavigating the lake … 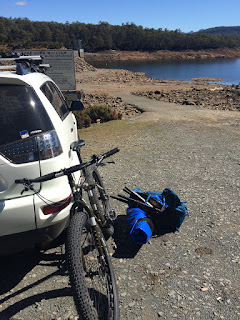 All up I was out there for just under three hours, and it was a great day.
But now I’m home again and see how close I actually was to Guelph Narrows, I just wish I’d pushed on that bit more … 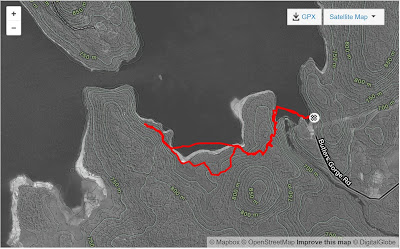